What should we expect to be in the new Budget?

Mr Hockey has already said that his second Budget, only a few weeks away, will be friendly to families, and that he’ll make savings somewhere else. I have little idea of what he might have in mind, and in this essay I wrestle with an assumption that I came across on another website. Mike Keating, former Secretary both of Finance and then Prime Minister and Cabinet, writes from time to time on the website of John Menadue, another former Secretary of Prime Minister and Cabinet. Both are most able and perceptive men, with long experience of government.

Keating’s essay was about the coming Budget, and what any Treasurer might have to do in the short-term to get the Budget back on track (wherever that is). In his view the taxation system has to be reformed, and a higher incidence of taxation for us all is on the cards. He has a particular focus on the capital gains tax and superannuation concessions that in his view favour the better off. 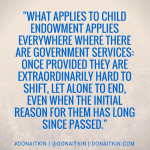 On the whole I agree with him, even though I am a mild beneficiary of the second. But what struck me, at the beginning of this well-written and otherwise persuasive piece, was a throwaway line: what revenue will need to be raised to efficiently fund the sorts of services that our society expects. The social scientist in me asked at once, What sorts of services are these? and On what basis is a society able to ‘expect’ those services?

I’m sure Dr Keating could provide reasonable answers to both questions. But to me they are enmeshed in a bog of rhetoric, history, passion and special pleading that does make the job of any Treasurer, not just Mr Hockey, a most difficult one. Let me start with the observation that any handout of any kind, by any organisation, to anybody, will quickly become seen as an established and perfectly reasonable part of the way society is. Its continued existence and enhancement will be argued for.

If it is something like child endowment, for example, then families will build it in to their own budgets, allocate expenditure on the basis of it, and so on. This simple little list, from the ABS, shows what has happened to child endowment.

That’s sixty years’ worth of fiddling with child endowment — and there’s been another fifteen years since.

A lot has happened since  1941. Our population has gone from about 7 million to 24 million. GDP per capita has increased eightfold since 1959. Family size was once large, then became small. Women have gone into the workforce, single parent families are much more common. Unemployment is at a level unknown in the 1960s, in part because virtually all jobs today require relatively high levels of skill. Children stay longer in school, and more go on the post-secondary education. The notion of ‘poverty’ has changed a great deal, because the whole society is much wealthier, the poor as well as the well-off. These  changes in our society, and they are huge, have been accompanied by new ways of thinking about welfare. The ABS notes:  A major change has been from universal provision of social security assistance to a view of social security as a safety net. The consequent shift to greater targeting and increased levels of assistance to poorer families has been the dominant change in assistance for children.

Shifts in philosophy produce shifts in policy: Other key changes made to income support arrangements for children are: recognition that the costs associated with children differ with age; increased assistance to children in families with just one income earner; a shift in payment from the principal breadwinner to the principal carer; and clear bench marking of the value of payments to ensure that they provide real, rather than symbolic, assistance in meeting the costs of children.

Why are we still supporting children in 2015? Look at the history of it all! We do these things because we did them last year, and, as Dr Keating says, our society expects it. But you might, at least in theory, ask again why we are doing this at all. Which children, and why them? But that’s all much too hard. Incidentally, I don’t have a particular view about child endowment, or child support services. I’m simply pointing out that a ‘service’ like this is set almost in concrete. A Treasurer can thin it out here or there, or shift its incidence a little. But end it? Goodness me, no! What applies to child endowment applies everywhere where there are government services: once provided they are extraordinarily hard to shift, let alone to end, even when the initial reason for them has long since passed.

Dr Keating’s sentence can be read as a plain matter-of-fact statement. Our society expects certain services, and Government’s job is to provide them, or at least to make sure that they can be funded. And he and I would probably agree that there is a set of services that a civilised Government should be providing to its people, who after all did elect the members of the Government. For my part a civilised Government should also be able to say to its people that if all these services are to be provided there needs to be more revenue, so that we all need to pay some more for them.

Not everyone would agree with that. We have a reasonably sensible tax system, but it could certainly be improved. But Government after Government has talked about tax reform, set up reviews, produced reports, and then failed to do much more than fiddle. Why? Because child endowment, and dozens of other services, seem fixed in the firmament. Our relative wealth increases, but its distribution changes; some people are in consequence worse off than they were, or worse off than somebody else. There is a constant cry, like Oliver Twist, for more.

Who would be Treasurer? Mr Hockey might consider a rule that any new handout needs to be offset by the withdrawal of an existing one. It would be an application to the whole society of  a general Expenditure Review Committee dictum that new policies need to be funded within a Department through the winding-down of others. But that will seem too hard too.