I write about this event with some personal involvement, because my wife and I are in it. We left Robe, on the southern coast of South Australia, to pay a brief visit to a winemaker at Cape Jaffa, who told us that he too was going to Adelaide, to collect his children early (a couple of days before the holidays) because of the big storm that was coming. We knew from the press that some weather event was in prospect for us, but at that moment the sky was blue, the air was crisp, the sun warm, and the notion of a storm that day seemed remote. By the time we left his winery, perhaps thirty minutes after arriving, the sky was covered with grey cloud, and the blue we had enjoyed was a patch in the sky far to the south. It began to rain, and the rain grew heavier and heavier.

It had stopped before we arrived in Adelaide, but to the west was a wide, black band of cloud. We checked in to our hotel, unpacked and went to the window to see that the rain was back, with what looked like an almost horizontal trajectory. Our windows, not perfectly sealed, issued a banshee wail* (there, I’ve never used that cliche before). Then all the power stopped, as did the city: no lights, no power, no traffic lights outside. No trains or trams. Nothing. I thought the power would go back on quickly, but it didn’t, and then we received a message over the emergency address system that the whole State was without power, and that the Premier had said it would not be on again for 24 hours. Dinner proved to be a cheese sandwich in the lobby bar, with a small tea light to show us where the food was. When we got back to our room (the lifts were operating) the emergency light had failed, and there was nothing for it but go to bed. All our electronic equipment needed charging.

The next day was wild and windy, but without much rain, and power back to the city, if not to some regions. Another dreadful night was in prospect, followed by lots of rain everywhere, though no more lightning strikes. What exactly had happened? A whole State without power! Those responsible were not talking about blame, though Senator Nick Xenophon thought that some heads should roll. Which heads? Why those ones? He didn’t say. What seems to have happened was a cyclonic disturbance, with more than a hundred thousand lightning strikes, strong winds and lots of rain, over a wide area of the State. In Port Augusta severe weather destroyed a major piece of the grid infrastructure, a transmission tower. When that happened a fail-safe mechanism protected the whole power system with a shutdown: when a sudden great loss of power occurs, the system turns itself off so that it does not cause the resulting power demand to cause a cascade of further shutdowns over the whole grid.

South Australia gets about a fifth of its power from Victoria and the Eastern Grid, via two inter-connectors. The rest comes from local wind, solar and gas. The coal-fired power station in Port Augusta, fed from the Leigh Creek mine much further north, was closed in May this year. When winds are strong the wind farms shut down to protect the turbines, and no solar much would have operating — at times it was dark enough for the street lights to come on (had they been able). So South Australia was depending on gas and what was coming from Victoria. Wind can’t power a recovery, and coal, the basis of everyone else’s power, wasn’t available locally. On the face of it, the wind that knocked over the important tower (and a score or more of transmission towers) was the primary cause. There were lots of these (courtesy The Advertiser). 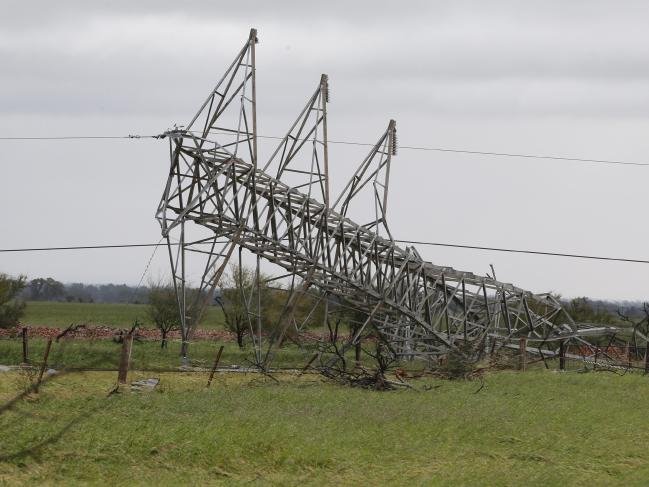 The winds don’t seem to have been so strong and that raises questions about why SA transmission towers fell over, but Queensland ones, in much stronger winds, didn’t — and why trees by and large survived while towers didn’t. Why did so many towers fall? Why doesn’t the SA system have real back-up? Hospitals have emergency generators, and they were available to support surgery, respirators and other critical operations. But to have a whole State knocked out for several hours is surely not supportable. ‘This is 2016!’ said a woman on television, indignantly. There seem to be three likely enquiries into the cause. Heaven knows when they will report.

And at once came the predictable explanations. The Climate Council told us, via the ABC and Fairfax (which seem to take this self-appointed group seriously), that it was all because of ‘climate change’. ‘”These conditions, driven by climate change, are likely increasing the intensity of storms like the one in South Australia,” Professor Will Steffen said. “Australians are being affected right now by climate change. We have people trapped by floodwaters, property destroyed and doctors working by torchlight in Adelaide as they struggle to cope with the latest in a series of more frequent and intense extreme weather events.’ In my view these vague assertions of cause are hard to support with any evidence at all. Certainly Professor Steffen didn’t offer any.

At the same time, I would have to say that there is no evidence, either, that ‘alternative energy’ caused the outage. It is possible that as the winds increased some of the wind farms, which were working at near peak capacity, had to shut down because the winds were too strong, and there was no back up for them. We will know more in due course. What is clear is first, that there has to be a more powerful and reliable electricity generation system for South Australia and, second, that there will be an intense analysis both of what occurred and what should be done to stop it happening again. It is possible that had there been no alternative energy decision some years ago, and South Australia had opted to join the Eastern Grid (I don’t know whether these ‘ifs’ are real) then there may not have been an outage at all, since the rest of the Eastern Grid system, the biggest in the world, would have been able to recover quickly. There is plenty of back-up there. It is clear that you can’t run a State like South Australia on alternative energy without substantial back-up from fossil fuels.

And there is little doubt that South Australians will demand that they are not subjected to such a disaster again, whatever the explanation, especially given that they pay much the highest prices in our country for electricity anyway. Senator Xenophon said that South Australia was the laughing stock of the nation as a rest of these events. I don’t think that’s likely to be true, but nonetheless the outage may point to a major reconsideration of the supposed alternative energy solution to electricity generation. 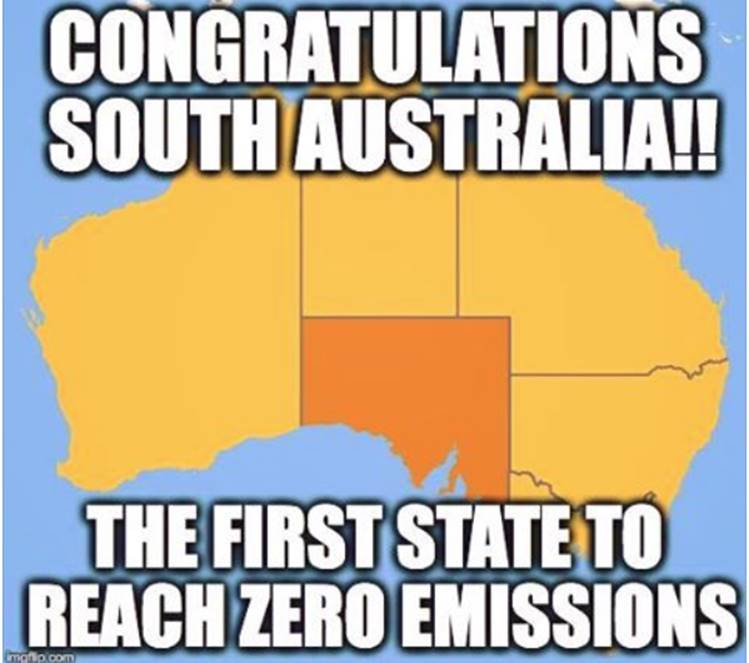 *Endnote: A banshee in Irish mythology is a female spirit that descends on a family when one its members is about to die, and it howls/screams/wails.