I thought I’d start this essay with the October temperature record, as assembled from Goddard Institute of Space Science (GISS) data by Ole Humlum, the Norwegian meteorologist. You can see his full report here. 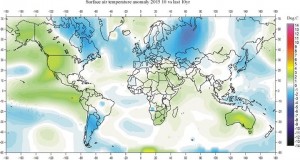 You can also see the effect of the el Nino clearly in the eastern Pacific, and its extension into the western United States and Canada. Eastern Canada, Russia and South America are all colder than average, while Australia is warmer. The rest of the world is about normal. The average is the past ten years. One inference I draw from a map like this is that the notion of a ‘global average temperature’ for October doesn’t make a lot of human sense.

And that leads me into climate, and ‘climate change’, and the actions of the American Physical Society, which claims to be ‘a non-profit organisation working to advance the knowledge of physics’. A year or so ago the APS set up a reference group to assist it in rewriting its statement on ‘climate change’, which was your full doom-and-gloom scenario. The reference group included Professors Lindzen and Curry, and had a good briefing paper and workshop to start with. I hoped, and wrote at the time, that our Academy of Science might do the same, but it didn’t. The revision undertaken by the AAS proved to be only marginally less scary than the earlier one.

And, alas, the same is true of the APS. The briefing paper has gone, the sceptics have been dismissed, and what we have is another doom-and-gloom statement, which you can read here. The short statement is internally contradictory, relies on the IPCC’s AR5 for science (you’d think physicists would have something to say on their own behalf); it calls for actions to reduce emissions, and to support research on technologies that could reduce the climate impact of human activities.

The draft of this statement was available months ago, and Judith Curry set up a thread on her website for APS members to comment, and you can read their statements here. The failure of the draft to meet the expectations that had been aroused by the presence of prominent sceptics on the reference board caused a number of physicists to resign from the APS (Professor Curry is not renewing her membership), and they include a number of Fellows — that is, distinguished members.

Why did this happen? Why assemble a knowledgable reference group and then dismiss what it said? I don’t know the answer, but I expect we will hear versions of an explanation before long. It is a sad business, if only because the statement is so intellectually threadbare. But it is what we have become used to. Statements made by organised bodies of scientists are not to be taken at all seriously if they enter the world of politics, of values and policies.

One of the comments made by dissenters was that of Carl Brannen. I don’t think that he would claim to be in any way distinguished as a scientist, but he wrote simply and well about his reaction to the draft statement, and I thought his statement was worth circulating.

For years I also believed that man was the primary cause of changes to earth’s climate. Eventually an ethanol company
needed a business plan and asked me to analyze the problem from the point of view of “will the US government continue to provide ethanol subsidies?” After reading the literature I found the evidence for alarming alteration of the climate to be very weak.

The essential problem with the climate is that it has always been extremely variable. To avoid that variation, you need to be able to either (a) understand it so well that you can predict it, or (b) gather data for such a long time that the natural cycles are integrated out. As far as (a), the problem of predicting the climate will be solved after the problem of predicting the weather is solved. As far as (b), the climate cycles on the order of 10 degrees C over time periods of about 100,000 years. Because of these inherent problems, it is not now possible to predict what the effect of CO2 on the climate is. We can say it will result in warming but cannot make a theoretical calculation that shows that it is significant. And we can model the warming but only with respect to temperatures that have oscillated wildly for many millions of years. And that means that the error bars on our estimates have to be incredibly large.

The basic problem with climate science is that it is a very young science and has not yet learned the humbling lessons of
older science. Every major branch of physics has gone through this transition. Early work can be characterized by naive use of statistics with a great deal of work published that reflects the biases of the authors. An example is the discovery of gravitational waves by Joe Weber. Compare his use of statistics with those now used by LIGO and you will see the difference between climate science now and what climate science needs to be.

But when Joe Weber repeatedly saw impossible gravitational waves the only result was the expenditure of a few million
dollars in experiments. What the APS statement is supporting implies trillions of dollars in changes to the world’s economy. What you are asking for is that we avoid the present CO2 experiment, which is likely to make small positive improvements to the world climate. After thirty years of failed predictions of imminent major climate effects is it any surprise that there is so little political support for a huge experiment in the world’s economy? I’m reminded of the physics predictions of the 1950s that it would take 20 years for fusion to bring the cost of electricity to zero. CO2 rises but world production of food continues to grow, snow continues to fall.

But the situation is worse than that. In addition to bad science, it is clear that the core of climate science has been
politicized by emotional arguments about the environment and corrupted by the distribution of government money. The
temperature record has been changed to accent recent highs. And the perversion of the peer review process, etc. All this came out in the “climategate” emails.

If you want to make a positive and fair APS statement on climate change, put it up to a vote. Let the same 6 experts
that testified at Koonin’s workshop put together (up to) 6 climate statements and their arguments in favor of their
statements. Let the APS membership read the statements and vote on the one they prefer. Then publish the vote totals. Are 97% of your members scared of CO2? Let’s find out.