This is a story about land-use and weather, or perhaps climate. We don’t know which, because the rainfall data only start with European occupation. In 1850 Thomas Elder sent a small ship from Adelaide up to the end of Spencer Gulf, its trip the beginning of the town of Port Augusta. The reports were excellent — lots of open grassy land, abundant fresh water in lakes and streams. Elder himself sent men and cattle north, and farmers arrived to till the soil. The winter rainfall continued predictably for a decade and more. Wheat was sent to Adelaide, and before long it was being sent to England.

Those with money took up large leases. One Hugh Proby, a young men whose father was a lord, took up what would later be known as Kanyaka Station, south of today’s township of Hawker. Not long afterwards, he was drowned in Willochra Creek attempting to get his cattle to higher ground during a flash flood. The lease was taken up by others, notably John Phillips, who decided that sheep were a better bet than cattle, and built a substantial homestead area at Kanyaka.

At its peak Kanyaka was virtually a township itself. Phillips had more than 70 families working there. There was abundant stone, and little usable native wood, so everything was made out of stone. The woolshed remains show the skill of the stonemasons he employed. The homestead had sixteen rooms, and there were dozens of other structures, the remans of which you can see today. His workers built around 40 kilometres of dry-stone walls. It was a big place.

Kanyaka was set up to be virtually independent with its own vegetable gardens, dairy, and piggery, while it had the last post office in the north of South Australia, with tens of thousands of postal articles in its best year, 1864. Because of its healthy level of supplies Kanyaka was also the departure point for a number of exploratory expeditions to the north.

In 1864 shearers shore 41,000 sheep. Three years later, after continual and unprecedented drought, only half of the sheep were left. Eventually, everyone left, and all you can see today are the ruins, in stone. It is one of the saddest places I have ever visited in Australia, and I have been there five times.

The drought affected a large part of occupied South Australia, and George Goyder,  the Surveyor-General was sent to determine where it was sensible to grow wheat, and where you simply shouldn’t. His Goyder line, from the 1860s, has proved to be a pretty good marker, even today. But the development of the railway line to Alice Springs (it got as far as Oodnadatta) encouraged more people to believe that once the railway was there the good seasons must return, and wheat farming was tried again and again above Goyder’s line. It never lasted. There was another serious drought in the 1880s.

By 1882 the railway had reached an outpost called Government Gums, later renamed Farina (Latin for ‘flour’), more than 100 km to the north of Kanyaka. Before long there were 100 people working there, and the occasional wet winter produced confidence that the area would become a vast agricultural region. No way. Goyder was right. All you can see in Farina today are more stone ruins. That part of South Australia is littered with them.

Until the 1864-67 drought there was a delusion that ‘rain follows the plough’, an early example of the hubris that sometimes besets people who think that humanity has the capacity and the power to fundamentally affect climate. Mind you, when you see the effect that winter rain has on wheat-growing in South Australia and Victoria, which I have witnessed in the past couple of weeks, you can almost excuse the farmers of 150 years ago. ‘It happened last year at exactly this time,’ they would say to one another, ‘and look, it’s happened again.’

Three years of drought ruined Kanyaka, though Phillips did come back one more time before drought drove him out forever. The little township surveyed five miles north of Kanyaka homestead, and the two-storey pub — they’ve all gone. Humans need abundant water if their life is to be endurable and productive, especially if they’re running sheep or cattle, or growing grain.

I spent ten or so years of my life studying farmers and their politics, and that took me around some of inland Australia. Again and again I would come across examples of over-reliance on rain. Some people do learn. A grazier near Canberra used his ‘winnings’ from the wool boom in the early 1950s to build the biggest dam he could scoop out. He’s never been troubled by drought since.

Weather can seem to come in cycles. Major droughts have occurred in southeastern Australia at the time of Federation, during and after the Second World War, and more recently around the Millennium. Rainfall can come in waves too. South Australia has no major streams that flow into the sea, other than the Murray, so floods there refer to the Murray. Further upstream, so to speak, there have been 21 major floods at Gundagai in the past 150 years. This marker shows their relative heights. 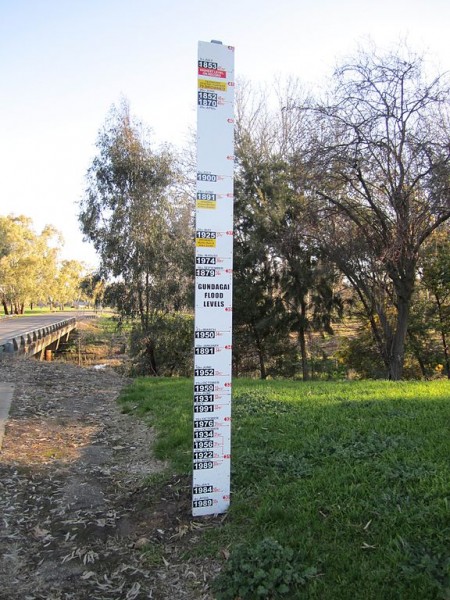 We have annual averages of rainfall, but it’s a rare place that has average rainfall every year, let alone the month’s average very month. Temperature? There’s a good deal of evidence that some of the hottest years experienced in Australia occurred in the 1890s, and the notion of an Australian ‘average’ is about as useful as that of a ‘global average’. We haven’t been here long enough to have good data that tell us much about long-term patterns in weather.

So what caused  the good weather and then the drought in central South Australia in the mid 18th century? We don’t know. We do know that some of the water that people found had come down Cooper Creek from Queensland, because Goyder found Lake Blanche full of fresh water, and that big lake is fed by the Cooper. But there must have been some good local rain as well, and for about fifteen years. To the best of my knowledge there has never been another such high-rainfall period in that area since.

What we also know is that droughts, fires and floods are part of our past, present and future. We need to prepare for them. We should not be building homes (or anything much) on flood-plains, or in the midst of eucalyptus forests. We should be conserving water wherever we can, and we should be thinking hard about how we will supply water to our every-growing cities. I know, I’ve said all this before.

None of it is easy. People don’t like being told what to do. There will be huge protests if any government proposes to build another water-supply dam. Many of those who lost their homes in forest fires want to build there again. I think they’re mad, but people are individuals who have their own preferences, and their own sense of risk.

But visit Kanyaka if you want to experience the sadness of the hard work and defeat that has accompanied so much of the pioneering of inland Australia, much of it because of a lack of knowledge of rainfall. We know much more now, and do not have to repeat the mistakes of the past.