Both of these terms were coined by an American satirist, Stephen Colbert, more than ten years ago. With respect to ‘truthiness’, he said We’re not talking about truth. ‘We’re talking about something that seems like truth — the truth we want to exist’. He thought that the ‘word police’ would object that ’truthiness’ was not a word, but in fact the next year Merriam-Webster pronounced ‘truthiness’ as its word of the year. I’ll leave ‘factiness’ for a moment.

What did Colbert mean by truthiness? In an interview with The Onion he expanded on its meaning in this way:

It used to be [that] everyone was entitled to their own opinion, but not their own facts. But that’s not the case anymore. Facts matter not at all. Perception is everything. It’s certainty. People love the President [George W. Bush] because he’s certain of his choices as a leader, even if the facts that back him up don’t seem to exist. It’s the fact that he’s certain that is very appealing to a certain section of the country. I really feel a dichotomy in the American populace. What is important? What you want to be true, or what is true?…

The term had a great run ten years ago, but it has reappeared, at least to me, in the context of another neologism, ‘post-truth politics’. Apparently this one was coined by a blogger, David Roberts, in 2010, who defined it as a political culture in which politics (public opinion and media narratives) have become almost entirely disconnected from policy (the substance of legislation). Earlier, Colin Crouch had used ‘post-democracy’ to refer to a model of politics where ‘elections certainly exist and can change governments,’ but ‘public electoral debate is a tightly controlled spectacle, managed by rival teams of professionals expert in the techniques of persuasion, and considering a small range of issues selected by those teams’.’ Post-truth’ seems to come from the early 1990s, while it has obvious links to the Orwellian world of 1984.

Wikipedia, from which most of the above text comes, says that post-truth politics is characterised by the way in which people campaigning go on saying the same things even when what they say is alleged to be not the truth, and indeed verges on untruth. Perception is everything, facts are irrelevant. While both sides seem to have engaged in post-truth politics in the recent American election campaign, and allegations of behaving that way seem to be abundant, whatever side of whatever issue is in context, I am not sure that all this is really as new as it sometimes seems. Repetition of the same slogans was rife in the 1950s, and I can’t recall particular election campaigns in which the issues were fought over in the detail of prospective legislation. The dominant theme was usually a scare of some kind.

If ‘truthiness’ is a gut feeling of truth whatever the facts, then ‘factiness’ is using actual facts to paint a misleading truth. That’s close to Judith Curry’s definition. I can’t find Colbert’s exact words. But the Curry/Colbert nuance is important. How often do we see numbers used and a misleading inference drawn from them. My old favourite was the old ‘Nine out of ten dentists recommend [whatever toothpaste brand it was].’ I think it is rife in today’s common discourse. Numbers are important, so if you stick numbers in then some people at least will nod and accept the statement. As an article in The Atlantic put it, ‘Factiness’ is the taste for the feel and aesthetic of “facts,” often at the expense of missing the truth… factiness is obsessing over and covering ourselves in fact after fact while still missing bigger truths. I’ll suggest that factiness doesn’t actually cleave neatly across the left and the right. It’s an outgrowth of our cognitive biases. We often make decisions emotionally, sometimes based on tribal affiliations; then we marshall the facts that prove us right while discarding the ones that prove us wrong.

As so often, what drew my attention to these terms was a reflective essay in Judith Curry’s Climate etc website. I had forgotten that she had written an essay six years ago about climate models in which she said that climate modellers tended to have ‘comfort’ about their models in the sense that the model developers [know about] the history of model development and the individuals that contributed to its development, the reputations of the various modeling groups, and the location of the model simulations in the spectrum of simulations made by competing models. In this context, comfort is a form of “truthiness” that does not translate into user confidence in the model, other than via an appeal to the authority of the modelers.

What is a ‘fact’, anyhow? Cultural relativists would say there aren’t any. What you think is a fact, they will tell you, is only so because of your own frame of reference, your worldview, your conditioning, your patriarchal perspective, and the like. As I have explained a few times, I have the old-fashioned view that there are indeed facts, and in research, and especially in science, a fact is a statement of an objective and verifiable observation. What you make of the fact is something else, and there’s too much ‘factiness’ about today, in which numbers appear to be facts, when they often are not. Factiness is everywhere — in politics, in advertising, in market research, in education, in economics. If I were into New Year wishes, one would be for less factiness and less truthiness, everywhere.

It is a fact that both Colbert and the writer in the article in The Atlantic saw truthiness and factiness as sins of the Right in America. But to me they are sins indulged by all of us, if we are not careful. And on that note I’ll finish with Dr Curry’s summary (with a little editing from me).

What are the facts in the climate science debate?

That is pretty much it, in terms of verifiable, generally agreed upon scientific facts surrounding the major elements of climate change debate.

Human-caused global warming is a theory. The assertion that human-caused global warming is dangerous is an hypothesis.  The assertion that nearly all or most of the warming since 1950 has been caused by humans is disputed by many scientists, in spite of the highly confident consensus statement by the IPCC. The issue of ‘dangerous’ climate change is wrapped up in values, and science has next to nothing to say about this.

This is my last post for the year. I’ll return on or around Monday January 16, and wish all readers a safe and enjoyable Christmas and holiday period. As for 2017, it cannot help being interesting!

Later note: With respect to the sea levels in and around Kiribati, the Bureau of Meteorology has the following graph:

Data from Bureau of Meteorology 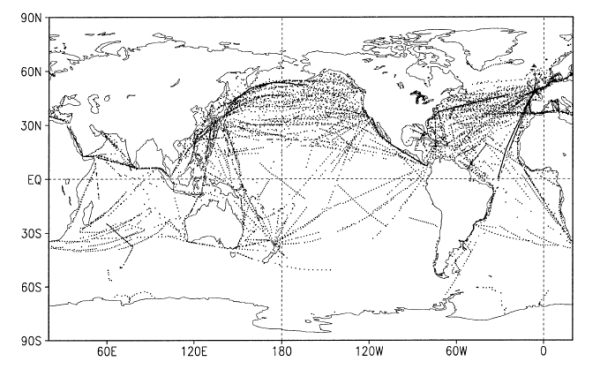