The Abbott Government has cause a mild stir within the passionate alternative energy community by asking the Clean Energy Finance Corporation not to put any more money into wind-power, but to look at new technologies, including solar power storage. If it had its way, the Government would simply have ended the Corporation altogether at the beginning of its term, but it didn’t and still doesn’t have the votes necessary in the Senate to bring that off.

The request prompted indignation and warnings from within ‘the wind industry’. Here is an example, from the Sydney Morning Herald:

The decision is another blow for the multibillion-dollar wind industry, which has just started to recover from the uncertainty created by the government’s Renewable Energy Target review. Analysts say $8.7 billion is expected to be invested in wind power in the next five years, while the corporation has invested about $300 million in wind projects to date.

and another, from the ABC’s The Drum:

It’s hard to imagine a fledgling industry being attacked and undermined by a national government the way the renewables sector is by the Abbott Government.

It might not be so shocking if we were talking about an industry that had a business that damaged community health (like, say, tobacco) or threatened the health and safety of current and future generations (like, say, coal). But renewables provide energy that is clean, safe and potentially very good for Australia’s economy.

You read stuff like this all the time. The wind industry simply wouldn’t exist without the subsidies that are provided for alternative energy sources. The ACT Government is doing another ‘auction’ on wind power to ensure that the ACT gets 90 per cent of its power from renewable sources by 2020. I’ve written about that absurd ambition before. When you turn on your light switch, 70 per cent of the power, on average, comes from coal-fired electricity generation. What the ACT Government is doing is adding to the national grid the equivalent of ACT electricity consumption (at 70 per cent by 2017, and 90 per cent by 2020, if things go to plan) that is produced by renewable sources, including wind. Why? Because it ‘believes’ in ‘climate change’, to use Bill Shorten’s verb a day or so ago.

In doing so it is adding to everyone’s energy costs, to no benefit whatsoever. Global temperatures will not be affected in any discernible way, and that is the ultimate reason for going to alternative energy. Wind turbines suffer from ‘intermittency’, meaning that the wind doesn’t blow all the time, or at the same force from one minute to the next. Adding turbines to the grid means that some other source of power has to be there as back-up. That other source, overwhelmingly, is based on fossil fuels. Why are we doing this? It seems nuts to me in terms of cost-benefit ratios.

If you want to read a detailed analysis of wind power as a contribution to the grid, go to Rud Istvan’s long essay on ‘Intermittent Grid Storage’ here. The main problem is that of storage. Yes, we can generate a lot of solar power in the middle of the day in summer in the desert. But not at night. Can we store the day power for use at night? Well, yes, but not very well, and not on a large scale.

The best and most reliable storage is pumped hydro — pumping water uphill during the day, or when the wind is strong, and releasing it downhill at night through the dam’s turbines. Pumped hydro is about 80 per cent efficient (you lose 20 per cent just  pumping water uphill), and virtually all of the world’s energy storage is a form of pumped hydro. You need two reservoirs, one uphill and one downhill. We don’t do this in Australia, save at Tumut 3 in the Snowy scheme, though we could do much more in the way of hydro power. Why not? The Greens and their sympathisers don’t like it. Too much political hassle

There is no effective storage yet in any other way. There are stories of giant (1 cubic kilometre) vats of salt that one would heat during the day, and then release heat to power turbines at night. So far they haven’t proved effective. Smaller batteries can work for households, cars and to deal with short-term emergencies. I conclude with something I wrote a year or so ago.

But wind turbines are simply a delusory addition to grid power. They require back-up for when they are not running, their contribution is much less than their stated ‘capacity’, and it is entirely likely that in terms of greenhouse gas emissions they produce more GGE in their construction and erection than they ever save. As with solar power, there are places where they make good sense, like isolated farms and settlements. Investing large amounts of our money to add them to the grid, ours being now the largest in the world, simply makes no sense at all.

Yet whenever anyone takes a shot at this ‘industry’ supported from the beginning by taxpayer’s money, which does not and cannot provide effective power for homes, industry and service, we get a barrage of propaganda. I am reminded of something that Leonard Schapiro, a great student of the Soviet Union, once wrote:  the true object of propaganda is neither to convince nor even to persuade, but to produce a uniform pattern of public utterance in which the first trace of unorthodox thought reveals itself as a jarring dissonance.

This quotation might also be the work of Alan Bullock. In either case, I am happy to jar away.

Long footnote: In a recent piece I pointed to evidence that in fact things are getting better, for the broad mass of humanity, and even for the broad mass of Australians, than was the case in the past. And since writing it I’ve come across a couple of graphs that emphasise that point. Both are about the rate of homicide. The first is a comparison of several European countries. 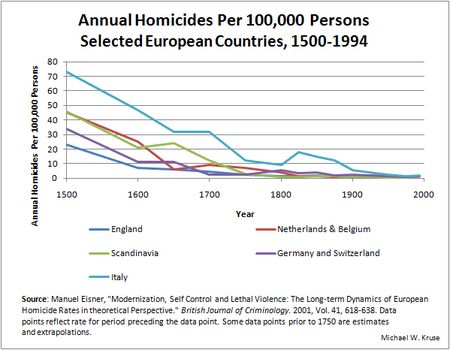 The second refers to California. 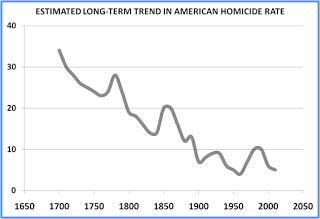 Yes, I agree that the early figures can’t be relied upon, but those who do this work, criminologists for the most part, do their best to provide sensible accounts of what happened in the past. What both graphs tell us is that homicide rates have come down, as they have too in our own country, though I don’t have a similar graph to back that statement up. Europe and California and Australia are not becoming either more violent or more lawless, despite what you will see on the TV news.