‘the social cost of carbon’

Apparently the American President has become exercised about something called ‘the social costs of carbon’, and his office has issued a paper about it, from whose executive summary we get the following: The purpose of the “social cost of carbon” (SCC) estimates presented here is to allow agencies to incorporate the social benefits of reducing carbon dioxide (CO2) emissions into cost-benefit analyses of regulatory actions that impact cumulative global emissions. The SCC is an estimate of the monetized damages associated with an incremental increase in carbon emissions in a given year. It is intended to include (but is not limited to) changes in net agricultural productivity, human health, property damages from increased flood risk, and the value of ecosystem services due to climate change.

Now President Obama has no capacity to get legislation through Congress that would achieve these ends, and seems keen to try getting what he wants through executive fiat. The outcome will be part of the unfolding story of American politics up to the next Presidential election, in three years. But it occurred to me that our super greens here would possibly like to copy the President, and tell us that it is time that we were doing the same — deciding on the social cost of carbon. I haven’t seen much sign of the push yet, but I’ll bet we’ll see it soon. 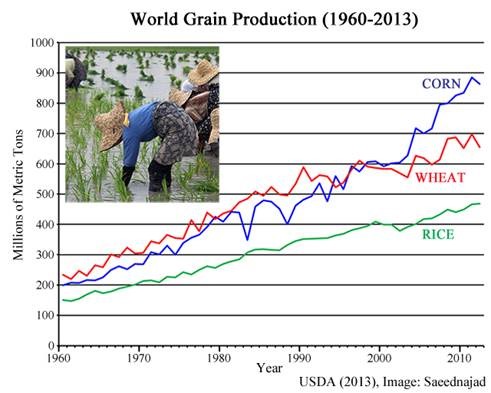 The data come from the US Department of Agriculture, and you can read the story here. All the forecasts for 2013 were for bumper crops, and since 1960, when we are told that carbon dioxide began to make us a lot warmer — lo, agricultural productivity has at least trebled. We are in harvest time, and the Australian output is expected to be about 11 per cent higher than last year, which was not a good year — the Australian crop will be about average for the last five years. My guess is that the jump in corn production in the last decade has a lot to do with the conversion of grain into ethanol.

Where is the monetized damage in all this, you ask, and you go on to wonder whether or not the President has in mind a kind of cost-benefit analysis. On the face of it, more carbon dioxide seems to be associated with more food, which ought to be a good thing. Perhaps he will set this good against a measured bad of some kind. What could it be? Human health? I’m not aware of any measure of general human health that shows it is on average worsening. More deaths come from cold winters than from hot summers.

Property damages from increasing flood risk? Now the President ought to know about the work of Roger Pielke Jnr, for he works in Colorado, and has shown that in fact if you take account of inflation over the past sixty or so years, there is less property damage than there used to be. What is more, that is true for extreme weather events generally. Yes, we have disastrous floods, like those in Brisbane in very recent memory, but the property damage there flowed from the fact that people were allowed to build on the flood plain of the Brisbane River. It was not even the largest Brisbane flood. In the developed world we are getting better and better at protecting human populations from catastrophes of natural kinds.

Oh, the President also needs to know that the incidence of extreme weather events also seems to be declining, though no-one has yet claimed (at least plausibly) that this reduction in incidence is a result of increased emissions of carbon dioxide.

I don’t know what changes in ‘the value of ecosystem services’ really means, and I’ll let that one pass. But I would want to say, as strongly as I can, yelling it from the housetops, that what has lifted human society over the last two hundred and fifty years from general degradation to a decent life for very many, all over the world, has been the availability of cheap energy in many forms. And all those forms rely heavily on the use of carbon. Carbon’s positive contribution to humanity has been simply enormous.

If someone does want argue, preposterously, that somehow carbon is the enemy of civilised life, I want them to account for how we have got to where we are now — and why those that haven’t got there should be prevented from doing so. All they need is cheap energy.

[Judith Curry has devoted two of her posts to this theme, here and here. Roger Pielke Jnr, also on my Blogroll, has two recent posts on US hurricanes and Pacific typhoons, both showing lower frequency.]