The relationship between CO2 and temperature

A little time ago, in a post on climate, I made a remark that caused a couple of readers to object. What I said was this: ‘Since the relationship between carbon dioxide increases and temperature is logarithmic it will take a good deal of time to tell [whether or not an increase in CO2 will be harmful to us].’ One of the readers then went on to suppose what I meant, and he was pretty right. But the objections forced me to stop and think. What was I trying to say, and had I said it correctly?

A stickler for accuracy might say that the relationship I was talking about was between ‘radiative forcing’ and temperature, and that has something to it. But if you search you’ll find plenty of references to the logarithmic link’s being between carbon dioxide and temperature. I’ve been assuming there is one for a long time, without really checking, and that it implies a lengthy period between changes in the one and consequent changes in the other.

The logarithmic relationship is accepted by the IPCC and just about everyone else you can consult. What varies is the implications that people draw from it. The basis is the fact that carbon dioxide radiates only within  a narrow frequency spectrum, and the first parts per million have the strongest effect. The more CO2 you add the smaller the outcome. In short, each additional doubling has the same effect on temperature. From 0 to 280 ppm the increase is the same as from 280 to 560, and the same as from 560 to 1120, and so on.

It’s like adding blankets and jumpers when it gets really cold. The first one does most of the work. Or in painting, a better example, if you apply transparent paint with the finest touch of colour, the first painting gives the strongest colouring; later layers  only faintly deepen the tint.

You can see the relationship over time in the following graph. Modtran5 is the current computer program devised (and apparently owned) by the USAF to model the atmospheric propagation of electromagnetic radiation. The vertical axis shows net downwards forcing, while the horizontal axis shows parts per million of CO2. The red lines relate the two at the time of the Industrial Revolution (conventionally 1780), the green lines show the present, and the black lines the result when the Industrial Revolution level has been doubled. Increased concentrations clearly have a progressively smaller warming effect. (I’m sorry the graph is so small; I haven’t found how to enlarge it.) 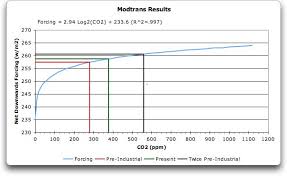 Although Svante Arrhenius is also credited with it, the first mention I can find for an apparent logarithmic relationship is that of Guy Callendar, an English engineer, in 1938. His paper, read to the Royal Society, is astonishingly modern in its attack, and his simple approach seems to have been ignored by the IPCC. Steve McIntyre of ClimateAudit is a big fan of Callendar, and you can read more about Callendar here. In the 1938 paper you will find Callendar’s projection of the relationship over time. He didn’t describe it as being logarithmic, but he drew it, and it plainly has that shape.

OK, so where is the rub? The orthodox, including the IPCC, accept that that there is a logarithmic relationship, and that it will produce around 1 degree Celsius for a doubling of CO2. But it is as though they find that quite uninteresting. They are fixated on climate sensitivity, which they see as far more important. I’ve written about climate sensitivity before in a tangential way, and it’s probably worth a proper exploration in a future post.

In the orthodox presentation the 1 degree Celsius consequence of doubling CO2 becomes the basis for multiplication. Climate sensitivity is the sum of the proposed feedback consequences of a change in forcing — in this case an increase in the proportion of carbon dioxide in the atmosphere. The feedback factors include clouds, water vapour, ice and snow and a few others. The current IPCC view is that the range of multipliers is from 1.5 to 4.5. It no longer proposes a midpoint, but the obvious one here is 3. In the IPCC picture, the logarithmic effect of doubling (1 degree C) is then multiplied by feedbacks to produce an outcome of between 1.5 and 4.5 degrees C.

If the IPCC is right, then my proposed slow change from a doubling, let alone from two doublings, is called into question. But what are the facts? Well, there aren’t any. What we have in the literature are estimates based on a great variety of bases. There are so many, in fact, that the IPCC has abandoned fixing on one of them, or on an average. What is more, there are quite a number of papers that propose a sensitivity that is around 1, and one or two that place it as less than 1.

Without over-doing it, my current feeling is that the orthodox may be committed to a high sensitivity level, because without it there is no AGW scare. The gentle warming that appears to have been the case over the past 150 years seems to have been beneficial to humanity at least, and I can’t see a good reason to suppose that a continuation of it at the same rate has to be seen with horror.

What is more, the current rate of warming is very small, and we may even be in a cooling phase. While that continues, the year in which we see the 1 degree increase from the time of the Industrial Revolution moves further and further away. On the current evidence, carbon dioxide is important, but it is not a super-power.