I have an abiding interest in national energy policy, and I am old enough to remember the blackouts and brownouts of the 1940s, when strike action in the coalfields showed what could happen to a modern society short of reliable system-wide energy. These days it’s not strike action that is the likely problem, but political action — the notion on the part of governments that it would be a good thing to move from fossil fuels to alternative energy sources. For some of this persuasion the stimulus is energy security (though that’s not the case in Australia). For others it is the lure of a sustainable world. For others still, it is the absence of fossil fuels and a reluctance to go down the nuclear path. There will be mixtures of these and other sentiments.

I’ve written a few times about the bizarre case of the ACT, which has announced that it will be fossil-fuel free, or 100 per cent alternative, in its electricity supply  by 2025, or whatever date you encounter. This is a fantasy and is either disingenuous or dishonest, or both. By and large Australia’s electricity comes from the grid, and 70 per cent of it is generated by burning coal and gas. When you switch on a light in the ACT the fossil fuel component of that light is the same as anywhere else. What the ACT Government has done is to commission solar and wind generators, whose output by the declared date might equate to the actual consumption of electricity in the Nation’s Capital. That is not the same thing at all.

In 2025, the proportion of fossil fields in the generation of the actual light or heat produced by flipping the switch will be the same as now, around 70 per cent. There’s ample evidence for all of this, and I’m not going to go through it all again. Why does the ACT Government go down this very odd path? Well, my guess is that it is a mixture of belief and electoral strategy. The Government recognises that there is a strong belief in AGW (anthropogenic global warming) in the ACT, and if it wants to be re-elected it need to keep those citizens in mind. (They might vote Green, and reduce the number of Labor MLAs…)

But this post is mostly about the world leader in all this: Germany, which has an official policy about the move to alternative energy, which is called die Energiewende — in translation, the energy ‘transition’, turn, or change. The term is 35 years old, and it’s been official policy in Germany for about 15 years, It means a steady move away from fossil fuels and nuclear energy to wind and solar, and has been heavily subsidised and regulated by the German Government under Angela Merkel.

I came across a systematic review of the policy via Judith Curry’s Climate etc website, and thought it worth discussing, because the lessons you can learn from it apply universally, not just in Germany. The author is Davis Swan, who seems to have been a kind of broad-spectrum energy analyst for the past twenty years. You can read his essay here.

His report card is balanced. Germany has produced a really significant base of alternative energy without either going bankrupt or causing real hardship to consumers, and what it has done will have useful flow-on effects to other countries by bringing prices down. On the other hand, the German Government has spent much more money that it needed to to achieve this (i.e.. it was rich and could afford to do it). German consumers have the second-highest retail prices for electricity in Europe (but they are comparatively rich too, so they can afford them). And Germany has only been able to do this (ACT take note) because there is a European grid from which it could purchase power when the alternative systems were not adequate. The purchased power comes from coal and nuclear energy. What’s more, there is no less dependence on fossil fuel power than there was in 2000, and there is no real sign that that dependence will end in the future. The following graph shows what has happened since 2003: alternative energy has increased but mostly at the expense of nuclear power. 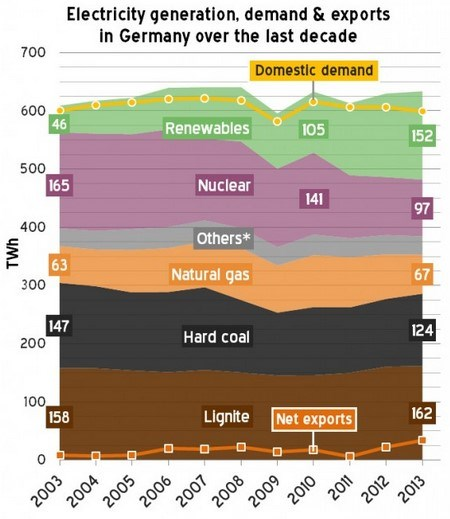 Finally, since alternative energy sources are given preference, the base-load coal electricity generators are pushed off line. Since they are designed to run all the time, this preference to sun and wind means the coal plants are only marginally profitable. One should simply shut them all down, or some of them, at any rate. But you can’t because they’re needed for back-up. And there is still no large storage capacity available to reduce the need for back-up, so the system stumbles on.

Davis says that without finding an economical and hugely scaleable energy storage system this approach cannot proceed much further. That’s the summary, and I think I’ve given it fairly. Davis says that the roof-top subsidies for solar panels have been  a $100 billion failure, because there just isn’t enough powerful sunlight to make much difference. Most of Germany lies above the 48th parallel, which means that in terms of the southern hemisphere it’s all well below Tasmania and below the South Island of New Zealand.  And when the sun is at its brightest, the demand for power is at its lowest. Correspondingly, when the demand for power is at its highest, in the depths of winter, sun and wind don’t help much. Solar power then provides about 1 per cent of demand. That is not a great help when everyone wants to be warm, the days are short, the nights are long, and the lights need to be on everywhere.

He finishes his essay, which I recommend, with this sombre statement: I cannot see how Germany can continue to develop significantly more wind and solar resources in the next few years. The imbalances between supply and demand at different times of the day and different months of the year are becoming too extreme. And with so much generating capacity in place it is difficult to imagine utilities building any new plants. What that means when the nuclear plants shut down is anyone’s guess but it does not look like a pretty picture to me.

Why do we do these nutty things? Again, it seems to be a mixture of belief and electoral apprehension, along with a considerable bit of path dependence. Once you’re heavily involved in doing something, and have spent lots of money on it, there is a real reluctance to abandon that path. You can see that in all sorts of things — defence procurements, rail and road plans and hospital building, to offer three examples. But in energy policy the blind belief that alternative energy is the answer, when the evidence is so strongly against it, makes me shake my head in wonder.