I start with a bit of housekeeping. The website began on 16 July 2012, with a post explaining why I was going down this path. It drew no comments, but the next one, on the carbon tax, drew three. Since then there have been just over 700 posts, which is a lot of writing — I’d estimate 750,000 words. And there have been nearly 6,000 comments. In all, 48,000 unique individuals have come to the site, for 130,000 sessions, with 320,000 page-views — on average, each visitor reads 2.5 pages, or two-and-a-half posts. Each post seems to attract about one-third new visitors, and some stay on, because the ‘traffic’ just keeps growing.

Last year most posts drew about 200 to 250 readers on day one, and then attracted between 1000 and 1500 readers in the first month. But old posts keep being re-visited. Who are the visitors? Three-quarters of them are under 45, according to Google Analytics. Some 55 per cent are men. The great majority, about 85 per cent, live in Australia, most of the rest in the USA and UK. My thanks to you all, and especially to those who comment. It is a civilised website, and I have not felt the need to moderate any post to the point of elimination. It is perhaps a sign of the website’s growing traffic that it now attracts a lot of spam — and that causes some extra work for me in examining each piece and coming to a decision. Much of the spam turns out to come from commercial sites offering watches, shoes, Viagra, gambling, and sex of various kinds.

It follows from all this that managing the website is a lot of work, and I was warned that this would be the case when I began. I don’t need donations and I don’t need a helper, but I do need to restrict what I do because my other writing is pressing. So for this year I will write one post for each Monday, but not any more unless something turns up about which I want to comment quickly. There will be elections this year both for the Commonwealth and for the ACT, where I live, and some of my writing will be about those two events.

I don’t want to write so much about ‘climate change’, because I feel I have said everything I want to say about that issue, which doesn’t seem to alter much. The Paris Agreement has disappeared from sight, and while extreme weather events have been occurring in the UK and the USA, and we have had fires here, the clamour that these events must be caused by greenhouse gas emissions seems to have subsided. More about extreme weather in a moment. I intend to develop a place on the site for my position on ‘climate change’, so that I don’t have to repeat myself. I’m not quite sure how this will work, but stay tuned.

At the time of writing only Roy Spencer has published a piece about whether or not 2015 was the warmest year ever, or since some kind of previous record was established. I understand that the land and sea data on temperatures will be released about January 20th. The UAH satellite data (along with those from RSS) show 2015 to have been the third warmest year, after 1998 and 2010. But there were certainly many claims that the year would ring that particular gong. The main cause for the warmth is hotter sea surface temperatures, themselves the result of the prevailing el Nino in the Pacific, which may have peaked. Floods and storm in the USA and the UK have occurred, and have produced familiar claims that these extreme weather events are examples of ‘climate change’ providing additional reasons why the climate models are right, and we must get rid of fossil fuels.

The difficulty with this sort of claim is that it is easy to point to any number of previous storms and floods that could not have been caused in this way. In October 1987 I was in London to give a lecture at the Institute for Commonwealth Studies. I stayed at the Crest Hotel across Russell Square, and woke up to hear a steady loud banging from outside. I got up and went to the window. The lid of a large garbage hopper was rising and falling, making a dreadful noise. Obviously wind was causing it, and I could hear wind shrieking. Eventually I went back to bed. In the morning I discovered that the power was off, and there would be only a cold breakfast. A great storm — a cyclone! — had descended on the UK.

It was not until later in the day that I understood what had happened across the south-east of the country. But London had experienced its first total blackout since 1945, the railway system was not running in the south east, a score or more of people had been killed, and Russell Square, which I had to negotiate to go the Institute, was an astonishing mess. Great trees that had been the glory of the gardens had been uprooted — they were 170 years old. Caused by ‘climate change’? No one said so at the time. It wasn’t an issue.

Had anyone argued in that way, one could point to Daniel Defoe in 1703, who was a spectator to another cyclonic event, in which violent winds killed more than 8,000 people.   Defoe had given up counting the fallen trees in Kent when he reached 17,000. He wrote a book about it, The Storm, whose cover looks like this:

The London Telegraph, alarmed at the beginning of this month that so few people seemed to have any idea that extreme weather had ever happened in the UK before, provided a helpful list of earlier examples, with illustrations, which you can consult here.

It’s much the same in Australia, with weather ‘records’ being referred to in the media that have no substance at all, when you look at the history. Brisbane had a ‘horror’ flood a few years ago, and our then leader, Ms Gillard, instituted a flood levy to provide for infrastructure rebuilding and some disaster relief. As it happens, the Bureau of Meteorology maintains a website on the Brisbane River floods. The Bureau lists numerous floods, which it categorises as Major, Moderate and Minor. Of the nine Major floods, the recent Brisbane one was number seven in height, and nowhere near the height of the really big ones.

As with floods, so with extreme temperatures. The Bureau also keeps a list of extreme temperatures, as you might expect, and the years of these records are all over the place. The hottest was in South Australia’s Oodnadatta, in 1960. Then comes WA in 1998, NSW in 1939, Queensland in 1972, Victoria in 2009, the Northern Territory in 1960 and Tasmania in 1960. For completeness I add the ACT, the hottest temperature in which occurred in 1968. Do you see a trend in all of this? I don’t. Of course, the Bureau would like us to look at temperature anomalies, but even there I don’t see much of a rise over nearly a century. 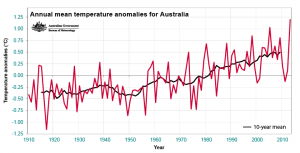 The evidence suggests that Australia is plugging along as it has done for a long time now, and if it turns out that 2015 was indeed the hottest year since whenever, I don’t think that should perturb anyone, unless of course they are Climate Botherers.

Thought for 2016: John Cleese, yes, that one, has apparently tweeted: ‘I would like 2016 to be the year when people remembered that science is a method of investigation,and NOT a belief system.’ I’ll drink to that.

[Later note. I have changed the sentence about Julia Gillard’s flood levy to make clear that most of it was for infrastructure repair, though some disaster relief was included.]