The Climate Church, once again

I’m not sure that I should write any more about the Climate Council — it will only encourage them. But a reader found me a link to the graph I couldn’t download when I wrote my  first post about the CC at the beginning of the week, and I thought it would be instructive to show just what the defenders of the orthodoxy do when they are caught between a rock and  hard place.

Here, once again, is the graph of temperature anomaly movement according to the HadCRUt3 dataset. It is worth bearing in mind that these data have already been adjusted very many times for all sorts of reasons, some open, others not discussed. The continuous thicker line is the 37-month rolling average. 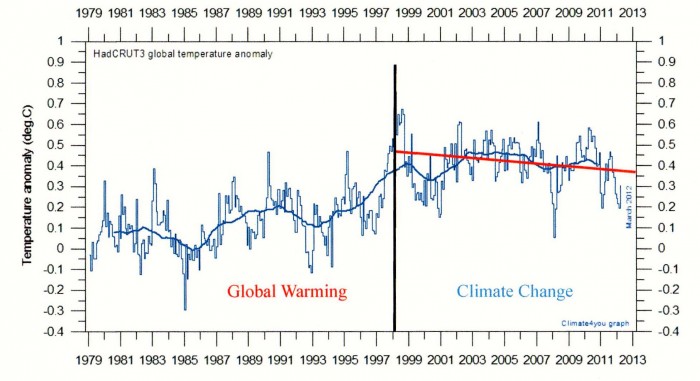 Now look at this one. It comes from a paper by Foster and Rahmstorf, both vigorous defenders of the orthodoxy. It looks like this: 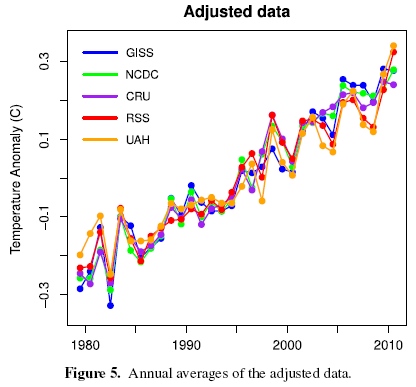 The two graphs don’t look much alike, do they. Foster and Rahmstorf were trying to reconcile the various datasets, and to do so, they tease out and remove the short-term variability due to ENSO, solar cycles and volcanic eruptions and find that after this adjustment all five time series match much more closely than before (see graph). That’s because the variability differs between the series, for example El Niño events show up about twice as strongly in the satellite data as compared to the surface temperatures. In all five adjusted series, 2009 and 2010 are the two warmest years on record.

The last sentence in this extract (from the RealClimate website, which is in my Blogroll, and where you’ll finish up if you follow the link to the authors) points to what I would call an irrelevance, but then, never miss an opportunity to strike a blow for Truth and Combatting Climate Change!

The Climate Council pinched the graph, but didn’t explain its purpose, or explain what all these adjustments were for. How dumb do they think readers are? The second graph bears no relation to the standard measures of global temperature anomaly, because these measures show that warming has levelled out, while carbon dioxide goes on being added to, and to a degree retained in the atmosphere. The standard data don’t help the orthodox case, so it is necessary to invent a new measure that does. That’s it, above. Great stuff — brilliant science!

The KEY MESSAGES of the Climate Council go like this:

1. Our understanding of the climate system has only continued to strengthen in the last six years. Ocean and air temperature are rising, mass from glaciers and ice sheets is being lost, and sea level is rising.

2. Scientists are more certain than ever that increasing global temperatures since 1950 have been caused primarily by human activities.

3. A warming climate is increasing the frequency and severity of many extreme weather events and is changing rainfall patterns, creating risks for human well-being, the economy and the environment.

4. Stabilising the climate system will require substantial and sustained reductions of carbon dioxide (CO ) emissions. We will have to decarbonise the economy.

I think it would be fair to comment as follows, using the same sequence:

1. Our understanding has grown, and as that happens our confidence that we know what is happening in climate has declined. There is a great deal more to know. Temperatures and sea-levels are rising, as they have done for a long time. It is extremely hard to measure any of these variables, and the errors involved in making the measurements are often greater than the apparent change.

2. Some ‘scientists are more certain than ever’ about all this, while others are properly cautious.

3. There is no observed relationship between the warming that has been observed and extreme weather events. Indeed, the IPCC itself has said so.

4. It is not clear at all that we should be trying ‘stabilise the climate system’ or that humanity has any capacity to do so, while  to ‘decarbonise the economy’ is a grandiose, preposterous and utterly unreachable goal.

The good news is that this awful Climate Church paper has hardly been mentioned by any media outlet. I hope that this mild rebuttal does not raise its importance in the scheme of things.