This is my last post for the year, and given that ‘climate change’ has been the dominant theme in 2015, and that the Paris Agreement has been accepted, at least in Paris, I thought I would finish the year with a simple piece on the ‘climate change’ issue. Most of it is the text of the verbal remarks that Professor Judith Curry made to a Senate Committee she was delivering her testimony to in early December. There’s nothing new in it, but she said it accessibly and well. For those who don’t know who she is, Professor Curry is probably the most distinguished climate scientist in the USA who  disputes the alarmism of the Obama administration and the scientists who support it.

There are others like her, like Professor Will Happer from Princeton, and Professor Richard Lindzen from MIT, not to mention Professors Spencer and Christy who manage the UAH satellite temperature database. But Ms Curry runs a very good website as well. It is my ‘go-to’ site for finding out, and for reading debate between the various sides of the climate science issue. On her website comments and essays are nearly always temperate and well-researched, though there are couple of regular commentators whose purpose seems to be to derail whatever the subject of the post is.

This is what she said.

Prior to 2009, I felt that supporting the IPCC consensus on climate change was the responsible thing to do. I bought into the argument: “Don’t trust what one scientist says, trust what an international team of a thousand scientists has said, after years of careful deliberation.” That all changed for me in November 2009, following the leaked Climategate emails, that illustrated the sausage making and even bullying that went into building the consensus.

I starting speaking out, saying that scientists needed to do better at making the data and supporting information publicly available, being more transparent about how they reached conclusions, doing a better job of assessing uncertainties, and actively engaging with scientists having minority perspectives. The response of my colleagues to this is summed up by the title of a 2010 article in the Scientific American: Climate Heretic Judith Curry Turns on Her Colleagues.

I came to the growing realization that I had fallen into the trap of groupthink. I had accepted the consensus based on 2nd order evidence: the assertion that a consensus existed. I began making an independent assessment of topics in climate science that had the most relevance to policy.

What have I concluded from this assessment?

Human-caused climate change is a theory in which the basic mechanism is well understood, but whose magnitude is highly uncertain. No one questions that surface temperatures have increased overall since 1880, or that humans are adding carbon dioxide to the atmosphere, or that carbon dioxide and other greenhouse gases have a warming effect on the planet. However there is considerable uncertainty and disagreement about the most consequential issues: whether the warming has been dominated by human causes versus natural variability, how much the planet will warm in the 21st century, and whether warming is ‘dangerous’.

Why do scientists disagree about climate change? The historical data is sparse and inadequate. There is disagreement about the value of different classes of evidence, notably the value of global climate models. There is disagreement about the appropriate logical framework for linking and assessing the evidence. And scientists disagree over assessments of areas of ambiguity and ignorance.

How then, and why, have climate scientists come to a consensus about a very complex scientific problem that the scientists themselves acknowledge has substantial and fundamental uncertainties?

Climate scientists have become entangled in an acrimonious political debate that has polarized the scientific community. As a result of my analyses that challenge IPCC conclusions, I have been called a denier by other climate scientists, and most recently by Senator Sheldon Whitehouse. My motives have been questioned by Representative Grijalva, in a recent letter sent to the President of Georgia Tech.

There is enormous pressure for climate scientists to conform to the so-called consensus. This pressure comes not only from politicians, but from federal funding agencies, universities and professional societies, and scientists themselves who are green activists. Reinforcing this consensus are strong monetary, reputational, and authority interests.

In this politicized environment, advocating for CO2 emissions reductions is becoming the default, expected position for climate scientists. This advocacy extends to the professional societies that publish journals and organize conferences. Policy advocacy, combined with understating the uncertainties, risks destroying science’s reputation for honesty and objectivity – without which scientists become regarded as merely another lobbyist group.

I would like to thank the committee for raising the issue of data versus dogma in support of improving the integrity of climate science.

This concludes my testimony.

There is a good video of her responding to Senator Markey during the hearing, here.

Why don’t we in Australia have people of her calibre holding senior positions in universities and speaking out about the flaws in the official doctrine promulgated by the IPCC? The flaws and uncertainties are not so hard to find, after all, as Judith Curry points out. One reason is that, in contrast to the US, there is general, if tepid, acceptance within our major political parties that ‘global warming’ is important and probably a worry. In the USA the Republicans and Democrats differ sharply on this question.

The second is that within the bureaucracy, with a few exceptions (like sea-level in NSW), there is also agreement that something has to be done. To speak out against that apparent certainty is, for people seeking employment, to risk appointment, promotion and funding. It is one pernicious aspect of current political correctness; there are others. Yes, we have excellent people who speak out, like Professor Bob Carter, Dr Jennifer Marohasy, Joanne Nova, Garth Paltridge, Alan Moran, and several others. But all of them, like me, have had to put up with official disapproval and hostility. In the Federal Parliament there has been only one politician, Dr Dennis Jensen, who has voiced the critical side.

In the new year I’ll resume posting on 11 January, all being well. In the meantime a Merry Christmas and a Happy New Year to you all. And just for fun, Geoff Derrick’s sardonic comment on CoP21. 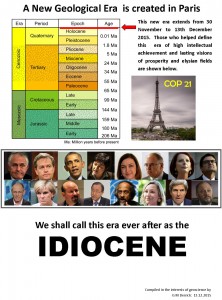