The beauty of the inland road trip in Australia

My wife and I do at least one biggish road trip (2-3 weeks) each year, mostly inland, and mostly including a track somewhere. Since Bev comes from South Australia, these trips usually include a visit to Adelaide, and as readers will know, we managed to time our trip this year to incorporate the worst weather in southern Australia for a long time. Driving in some of it was no joke, and some drivers simply pulled off the road to wait for the strong winds and rain to subside. But as always, there were pleasures in abundance, and here were some of ours.

Spring: We choose the cooler months for these trips, and that usually means roadside wildflowers. In Victoria and South Australia the first to be seen were what are called (in South Australia) ‘soursobs’ (Oxalis cernua) — small yellow flowers in enormous profusion, in road cuttings especially. They contrast well with the usual green of the countryside, even in the arid areas, because the rain and the cooler weather brighten all the herbage which, this year, was especially green. There was lots of yellow about — billions of daisies and a lot of dry-country wattle, with thin, needle-like leaves. Between Broken Hill and Wentworth we passed through long purple avenues of Echium plantagineum, better known as Paterson’s Curse (NSW) or Salvation Jane (SA). It’s normally a smallish plant, but we saw some along the roadside that were 600mm and higher. They were only on the roadside, the seeds presumably dropped by passing loads of hay or wheat. A year ago we saw hundreds of square kilometres of wildflowers, yellow, white and mauve, on the flood plain of the Darling River south of Bourke. This year roadside water was just about everywhere, and the Murray-Darling river system was running a banker. The Murray was close to the road in Victoria in several places; the Loddon was overflowing; and the Torrumbarry Lock near Echuca had its gates right up — the Murray was flowing fast underneath them. There was lot of water over the roads in the Riverina, and one road was closed for that reason. We avoided the Victorian flooding.

Trees: In the arid areas a line of trees marks a creek bed, and many had water in them. What continues to puzzle me is the distribution. South of Broken Hill we passed through eucalyptus forest, and then casuarina forest, but rarely the two together. Occasionally some native pine (callitris), which seemed to like the casuarinas more than the eucalypts. I’m sure that the relative distribution will be related to sub-surface water and soil type. Indeed, the three hundred kilometres that separate the two towns provide a great variety of arid environments,

Birds: In the arid areas, and even in lush Victoria, alongside the Murray, kites are a common sight in the sky. They seem to be the square-tailed kite (Lophoictinia isura). North of Broken Hill last year we saw dozens of wedge-tailed eagles (Aquila audax), feeding from the road kill. They have the slowest take-off of any bird, and often fly down the road in front of your car, which means that they can become road-kill themselves. The wind and rain kept many birds under cover, but we saw some honey-eaters so intent on their feed that they paid little attention to us, when we were only a couple of metres away.

Animals:  Once you are in the arid areas, you need to keep a sharp lookout for emus, which are plentiful, and happy to self-destruct at the front of your car, as one did to us a few years ago in northern South Australia (at some cost to us as well). The other frequent sightings are feral pigs, which range in colour from black to white, and all possible combinations of black, white and brown. On this trip we also saw an echidna, several kangaroos, and a fox. We’ve seen dingoes, too, even inside the dog fence, on other occasions.

Size and scale: The enormous horizons in the outback are a great delight, and there were several of them available south of Broken Hill. A small rise in the road can give you, for a moment, a vast expanse of scenery, the pale blues and greens of the saltbush and related plants, with red or white sand in between, and lines of eucalypts showing you the creek beds. You can’t photograph this sight helpfully — it’s just too big. Depending on the height of the rise you are gazing at something like sixty km of land in one movement of your head. You can’t do that anywhere else.

History: Having grown up in a country town (and become a historian) I love to see the tide-marks of human occupation. Most country towns have a few beautiful old buildings. Here is a former bank building in Camperdown (Victoria), one of several surviving and well maintained structures from the glory years of this small town. 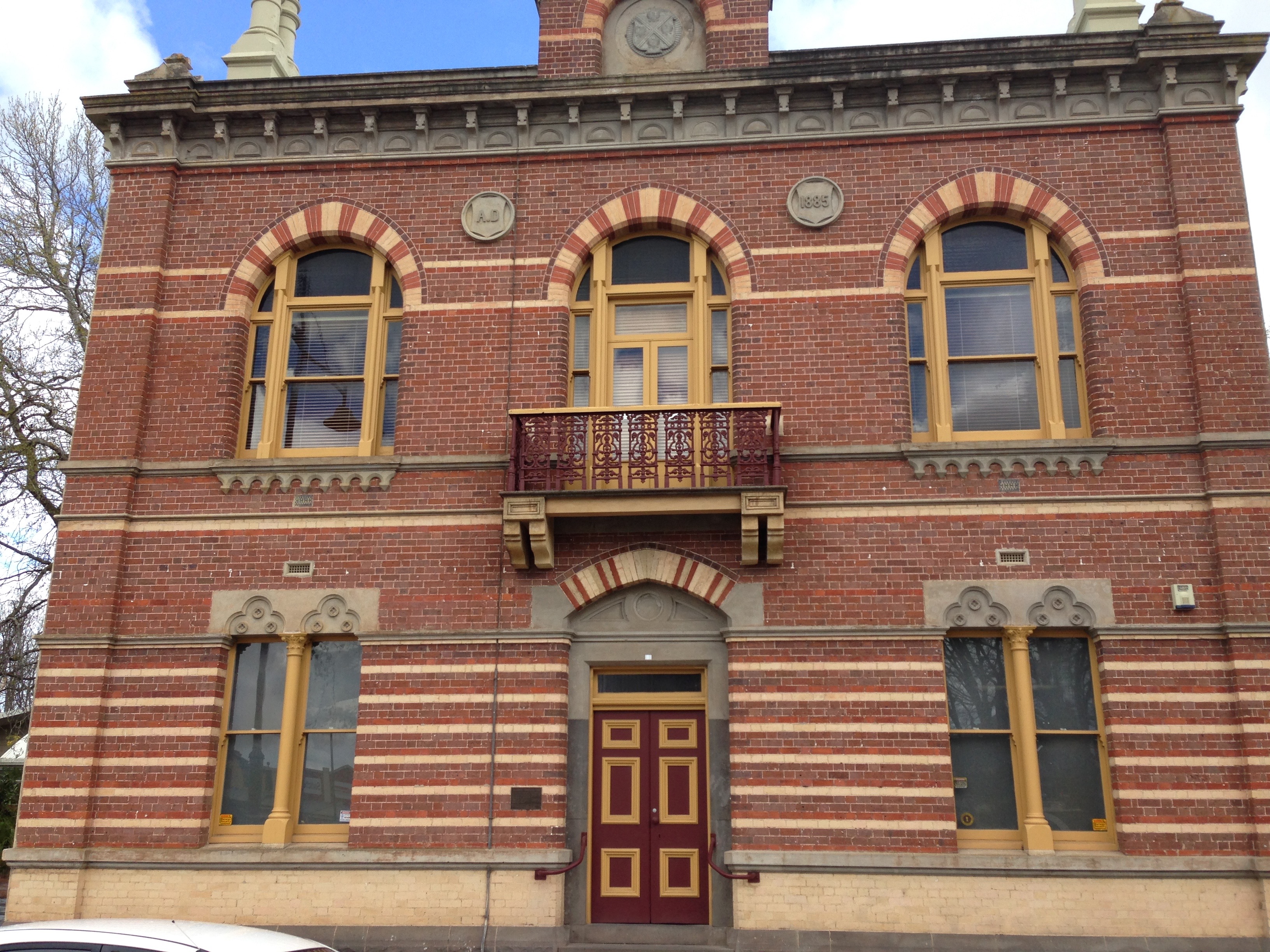 Productive land: In the arid areas rural productivity starts with sheep. There is so much pick at the moment that we could see flocks of sheep in areas where the carrying capacity is one sheep per square kilometre. In South Australia a few farmers had taken a chance on Spring rain, and had sown early. Someone else had done so about twenty km north of Wentworth, too, a great expanse of green wheat, maybe three km by two, in land that seemed just too sandy to support cereal crops — though you could say much the same about much of the Western Australian wheat belt, I guess, and the wheat belt of western South Australia, too.

Once you are in better rainfall country you see beef cattle, and we saw great numbers, everywhere. I guess there’s more money in beef than in wool and meat. And given the route we chose we seemed to pass thousands of vineyards, some of them new and flush with early spring growth, and a few mournfully old and black — left to die before being pulled out. The vines had not been pruned at all.

Why? Australia has 64 wine regions and about 2,500 wineries. The numbers of farmers growing wine grapes are even larger. But the emphasis now is not on casks and the volume end, as it was a generation or so ago, but on quality. The knowledgeable are going for high quality, and if that means ending contracts with grape-growers whose product is not up to the mark, or pulling out vines and replanting with new clones or new varietals, then so be it. Prices are high, but no one is making a lot of money, according to someone I talked to at a vineyard in Victoria. Invest invest, invest …

Food and accommodation: We like staying in B&Bs that have been made from historic houses, and there are a lot of these. Most are delicious, and they are quite often in the heart of the country town or village, for good reason. Here is ‘Colhurst’, in which we stayed at Mt Gambier, built in 1878, before the great wool boom of the 1880s, and as elegant a house as you could wish for. It was well preserved inside, too.

Elsewhere we stayed in whatever looked attractive and central. There were excellent restaurants in every town, and Tripadvisor helps you find them. You can get a decent coffee practically everywhere, even in the only stop (and service station) between Broken Hill and Wentworth. The grey nomads, like us, have had a beneficial effect on the quality of food and service in the bush, and you’ll hear proprietors say so. Cars, caravans and motor caravans were on all the roads we travelled on.

We could not get to our scheduled farmstay on the Darling — because the road was closed, and the proprietor was worried that we would come to grief if we tried. Another time. This was an exciting trip because of the weather, but all our memories are good, and the beauty of Australia got to us again and again. English friends, who have spent months here just seeing the (whole) country said that the longer they stayed, the more attractive and interesting the country became. We agree. It is such a privilege to live in this most unusual and beautiful country. The wide brown land for me…