The Academy of Science Lends a Hand

The Australian Academy of Science is a prestigious institution, and like the other learned academies, is mostly about conferring prestige on researchers (in this case, natural scientists) who are thought to have done well. It was founded in the 1950s by a group of Australian Fellows of the Royal Society, which is the oldest, and in its own view the most prestigious, of all the world’s learned academies. The AAS is wealthy, with total assets of around $52 million, and an annual revenue of about $14 million. In 2014 it received  a special grant-in-aid from the Commonwealth of $1.7 million, received another $3.5 million in other grants (mostly Federal), and collected $2 million in donations, mostly from Fellows and deceased Fellows, plus another $2 million in publication income. It is the go-to institution when important matters of science are being considered by governments in our country, and its President is taken seriously as a scientific leader and spokesperson.

I have known most of the Presidents for the past thirty years or so, and have known quite a lot of Fellows, present and past. They are exemplary scientists, or at least their peers think so, and I would not argue the toss about matters of pure science with any of them. And that makes it all the more odd that the Academy has thought to enter the field of politics again with a statement about ‘climate change’. It published one such statement in 2010, which was due for revision in the middle of last year. According to report, the paper was finished on time, but its publication was held up because of financial stringency. Since the AAS is not exactly poverty-stricken, I find that explanation a bit odd too.

Well, the new statement came out a week ago, prepared by some of the leading Australian figures in global warming. Its publication and essential message were faithfully reported by the ABC, and the report received some really critical press at once (here, for example, where you can also find links to other critiques). Garth Paltridge, a former CRC Director and chief research scientist in the CSIRO, devoted an op. ed. to it in The Australian, in which he concluded, ‘Basically the academy has fallen into the trap of being no more than a conduit for a massive international campaign seeking to persuade a sceptical public of the need for drastic action on climate change’.

If you want to scrutinise the report, it’s not long. There are hundreds of references, but anyone with an interest in global warming or ‘climate change’ can see the old cliches of argument brought out. I’ll give just a couple of examples. After a paragraph or two about the uncertainties in all this, we are told, Despite these uncertainties, there is near-unanimous agreement among climate scientists that human-caused global warming is real. Well, I would agree that increasing CO2 in the atmosphere will, other things being equal, tend to increase temperature, and human activity has indeed been sending more carbon dioxide into the atmosphere. But when I go to the three references that support the claim of ‘near-unanimous agreement’, I find them to be Doran et al, Anderegg et al, and Cook et al, each of them hopelessly weak as a basis for such  a statement. The last one is, to put it kindly, the worst journal article I have ever come across. 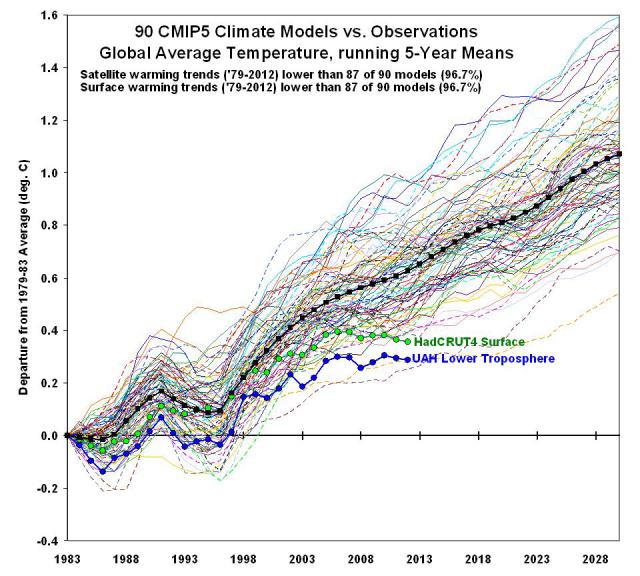 The whole thing is awfully one-eyed and selective.

My interest lies not so much in the way the science is presented, loaded though that is, as in the Academy’s purpose in generating such a report now. According to the UNAA (the UN Association of Australia), the Academy did so in an effort to better explain climate change to the community and to take account both of new research and public questions about climate change…  Maybe. I didn’t find the document at all helpful in either effort.

While you could see at least an argument that the 2010 statement was keyed to support the then Labor Government’s crusade for carbon taxes and emissions trading schemes, the Abbott Government has dismantled the carbon tax, and is not sympathetic to more pressure in that area. So why do this now? One reason may be that, having published a call to arms in 201o, the Academy, or someone in it, may have thought it would look craven if it didn’t support its earlier sermon.

What really irritated me was the last section: Question 9: What does science say about options to address climate change? Options here are the choices facing governments, and they are political, not scientific. One obvious one is to wait and see: very little warming is happening at the moment, the models aren’t performing well, and so on, and a prudent government might well get to work on other things. Another is to put some money into research on natural variability, and prefer that to yet more stuff on the consequences of human activity. We need to know much more about the natural context in order to assess the impact of humans and their work.

A third could be to recognise that there will be adverse climatic events whether or not human activity is the major cause, and to prepare to adapt to those changes. We could be doing more, for example on flood control, fire and drought. Yes, none of it is easy, and all of it is highly political, but that’s what governments are for.

Only one of these options seems to have occurred to the Academy. It sees four broad strategies: emissions reduction, carbon sequestration, adaptation, and geo-engineering. In the Australian context, only adaptation seems to me to have any chance of being implemented, and we should do that anyway. The others are pie in the sky, for all the obvious reasons. Emissions reduction is a non sequitur unless the whole world does it, Australia stops exporting coal, and we all adjust to a much lower standard of living. Carbon sequestration is still a laboratory proposition, and geo-engineering is fraught with cost, uncertainty and danger.

And again, you ask yourself — why is the Academy doing this? Its portrayal of ‘the science’ is one-sided and unhelpful. It is pushing a message on behalf of the global warming orthodox that is poorly supported in the data, and pushing it to a Government that is most unlikely to want to hear it. Garth Paltridge said that it was possible that Some day the academy may come  to regret the arrangement. I agree with him.