Some good news for us all, especially the Pope

At the beginning of his Encyclical, Pope Francis said this: The violence present in our hearts, wounded by sin, is also reflected in the symptoms of sickness evident in the soil, in the water, in the air and in all forms of life. This is why the earth herself, burdened and laid waste, is among the most abandoned and maltreated of our poor… Because I was reading on to see what he wanted to say about global warming and  ‘climate change’ I let that passage pass, though I felt it was hyperbolic in the extreme, and I made a glancing reference to the issue in my essay of that time.

It is pleasant to be able to say that His Holiness can take comfort from a stirring account of the positive changes that have been occurring to Nature in at least the developed parts of the world. The monograph, Nature Rebounds, is by Jesse Asubel of Rockefeller University in the USA. Dr Asubel leads a research program that aims to find the technical means to facilitate a large, prosperous society that emits little or nothing harmful and spares large amounts of land and sea for nature. He is closely associated with the concepts of decarbonization, dematerialization, land sparing, and industrial ecology. Sounds good?

His little book is a good read, too. Asubel starts with the story of  the bear that recently killed a hiker in New Jersey, close to New York City. The last known bear attack in NJ was 150 years ago. America, it seems, is going back to Nature. There seem to be about 2500 wild bears in the state, with a hunting season for six days to keep the numbers down. Protesters have picketed the area in an attempt to stop the hunt. It all sounds reminiscent of the annual fuss about the cull of kangaroo numbers in Australia’s capital city.

In contrast to the Pope’s argument, Dr Asubel says that in the USA (and I would argue the much the same is true of Australia) …[a] series of decouplings is occurring, so that our economy no longer advances in tandem with exploitation of land, forests, water, and minerals. American use of almost everything except information seems to be peaking, not because the resources are exhausted, but because consumers changed consumption and producers changed production. Changes in behavior and technology liberate the environment.

The rest of the monograph spells out his message. In farming, grain harvests are five times larger than they were in 1940, but with no more, or even less, land being used. Pesticides, nitrogen, phosphates, potash and even water are used less than they once were. The conversion of crops to meat has also decoupled, because farmers are now much more efficient than they once were.

Forests are no longer being laid to waste. The first transition from cutting forests down to growing more trees came in 1830 in France, with the move to coal and iron as industrial staples. The transition in the USA occurred 75 years ago. The Americans, and we Australians also, use plantations now for a significant proportion of of timber needs. We use less paper, Australia Post is not delivering the volume of letters it used to, we don’t need railway sleepers any more, and we burn much less wood for heating. As we know, newspapers of the traditional kind are in real trouble, and publishing is in a similar crisis.

Asubel calles ‘global greening’ the most important ecological trend on Earth today… and satellite comparisons of the biosphere in 1982 and 2011 by Ranga Myneni and his colleagues show little browning and vast green expanses of greater vegetation. A fine global map illustrates this point, and it looks like this (yellow, brown and red represent a loss of greening): 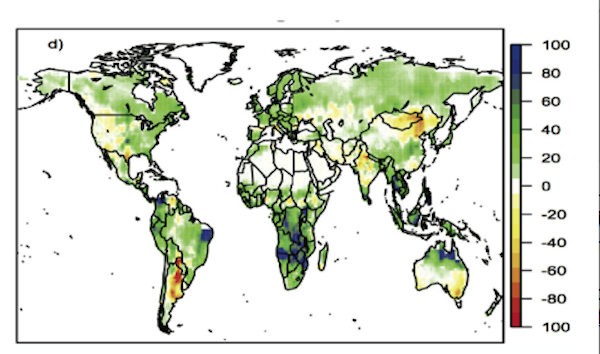 As with farming and timber, Asubel thinks that that the USA has already passed peak use of other materials too. Back in the 1970s, we thought America’s growing appetite might exhaust Earth’s crust of just about every metal and mineral. But a surprising thing happened, even as our population kept growing. The intensity of use of the resources began to fall. For each new dollar in the economy, we used less copper and steel than we had used before. The relative and absolute use of nine basic commodities has been flat or falling for twenty years, and they include plastics, paper, timber, lead, aluminium, steel and copper. America has started to dematerialise, he says. The smart phone, whose materials are worth about $1.50, can and does replace 32 other devices, in whole or in part.

What about petrol? Per capita consumption of petrol peaked about 1970, and Asubel thinks the USA may have passed peak car travel. Why? We live mostly in cities, and cars have choked urban roads. There will be more sensible ways to use vehicles, like shared cars, the Uber taxi, and much more personally directed public transport. He sees maglev trains, rather than planes, the way of the future in land transport.

More generally, there has been a decoupling of economic growth and air quality, something I have noticed particularly in the UK and Europe, whose urban areas were black with soot when I first went there in the early 1960s. The black has gone, along with the pea-soup fogs I remember.

As I have written before, population is not rising at all quickly. Asubel estimates that we have passed peak child. It is likely that immigration will keep Australian, Canadian and American populations rising, but globally, the estimate is that the absolute annual number of humans born reached 130 million in 1990, and has stayed at around that number ever since. Given that fertility is declining just about everywhere, the annual global production of babies is likely to fall. Populations will stay high because of advances in medicine but, he says, a 2 percent annual gain in efficiency can dominate a growth of population at 1 percent or even less.

Is there anything he’s not happy about? Well, the oceans. We are moving towards aquaculture for fish food, and we must move even further: If we want to eat sea life, we need to increase the share we farm and decrease the share we catch. And he has some fancy futures for eating generally, which I’ll leave for the gourmets.

Nature Rebounds is a most optimistic and well-referenced account of what has happened. Its cover photo is of a whale surfacing in the Hudson in sight of the Empire State Building. That was not photoshopped. In my suburb at night I have my lights on high beam, partly because there a few true street lights, and partly because you need to look out for kangaroos, wallabies, foxes and possums, as well as cats and dogs.

If you are an environmentalist, you should be really happy at what has been achieved over the last fifty years. Yet the prevailing tone of environmental talk is, like that of Pope Francis, despairing and gloomy. It really is time for the positive side of human activity in the world to be given its proper status. Nature Rebounds was published in January, months before the Encyclical. Pity the Pope didn’t read it.

Footnote: I don’t think he watched Hans Rosling’s wonderful, hour-long examination of world population trends either, but if you haven’t seen it , spend 60 minutes doing so, here.