On poverty, in the past, and in the future

Bill Gates, he of great wealth, and the classic leader of the world’s English-speaking A-list, has a foundation which he and his wife run. It puts out an annual letter, which came my way a little while ago, and started with a quite up-beat statement about poverty. It went like this:

By almost any measure, the world is better than it has ever been. People are living longer, healthier lives. Many nations that were aid recipients are now self-sufficient. You might think that such striking progress would be widely celebrated, but in fact, Melinda and I are struck by how many people think the world is getting worse. The belief that the world can’t solve extreme poverty and disease isn’t just mistaken. It is harmful.

I remarked on that statement because on almost the same day I read how the gap between the rich and the poor had widened, and what a terrible thing that was. Now those two statements are not incompatible. The gap could be widening, and the poor also becoming less poor. That’s what might happen in any society in which markets operate and, for whatever reason, that society is getting wealthier: the wealth trickles down. Wealthier people want goods and services that they could not afford before, and pay for them with their new money, which goes to those who work for them, either directly or indirectly.

Bill and Melinda are not short of cash — their net worth went up by $6 billion last year to $67 billion, and their house cost $63 million — so you might think their outlook is a tad rosy. In fact, I am pretty sure that they’re right. They provided a graph to support their claim, but I went to another one, from AEI, a Washington think-tank that would be on the right rather than the left of American politics. 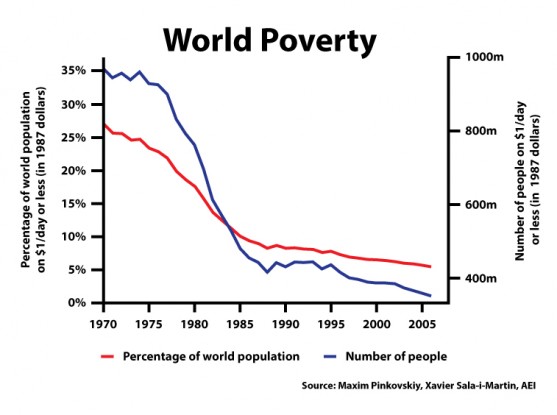 It’s not a good graph technically, because while one of the vertical axes begins at zero, the other doesn’t, and you get the impression that world poverty is nearly at an end. It isn’t, of course; there are 400 million or so to be raised, and $1-a-day income, while a standard figure, is not exactly a level of comfort.

Nonetheless, the world’s human population is moving quite rapidly from poverty towards something more tolerable. I’ve seen this myself over the past forty years during which I have been to Asian countries many times, and the change there has been dramatic. Gates is even more up-beat about the future:

I am optimistic enough about this that I am willing to make a prediction. By 2035, there will be almost no poor countries left in the world. (I mean by our current definition of poor. Almost all countries will be what we now call lower-middle income or richer. Countries will learn from their most productive neighbors and benefit from innovations like new vaccines, better seeds, and the digital revolution. Their labor forces, buoyed by expanded education, will attract new investments.

He may be right, and if I am about at all in 2035,  I will wondering whether or not I’ll still be there to get the royal telegram in 2037 rather than whether or not Bill Gates was right in 2014. If you want a contrasting view, of relativities, go to Roger Pielke Jr’s recent blog on that subject, where you can see that America’s poorest five per cent are on average as rich as India’s richest five per cent.

The real question is: what are you trying to argue? As I said at the beginning both statements can be correct: the gap can be widening and the poor becoming wealthier. Which do you think is most important? Why? My guess is that the poor  assess their present situation in terms of their past situation, not in term of how much Bill Gates has. If they see their situation as improving, they’ll be happier and more confident about the future.

Interestingly, Pielke Jr had another post on poverty early in January, this time about the extent to which poverty within the USA had declined over time. He uses data and papers prepared by others (most interesting stuff), and concludes that  The overall poverty rate fell by almost 40% from 1967 to 2012. The poverty rate for children fell by a similar amount, for those of working-age the rate fell by 23% and for the elderly a remarkable 78%.

Even though there remains considerable inequality and outright poverty (still 16% in 2012), as well as important debates on what “poverty” actually means, we can also look at the numbers and conclude that the “war on poverty” has been a success.

I found both the Gates and the Pielke Jr papers to be well-argued and a source of optimism, not just for me, but, I would hope, for many others. The key concept to keep in mind is that ‘poverty’ is not the same as ‘inequality’. They can be connected, yes. But if we want to reduce ‘poverty’ it is not at all clear that focussing on how much the rich have is the way to go.

I have no wish at all to have the sort of wealth Bill Gates has. It comes with immense restrictions on his freedom of movement and capacity to live what I would call a satisfying life. And if we somehow ensured that all his wealth was distributed to the world’s poor, they would each get about $15 extra dollars that day. And the next day?

Inequality has never grabbed me as a reason to take up arms. There are all kinds of inequality everywhere. A lot of it is the way it is, and not the outcome of ‘social structures’. But that is for another post, on another day.