I felt the need for something less grimly serious at the end of the week, so this little essay is about an adventure, though there is a little moral buried in it. The story begins in 1942, when two B-17 bombers escorted by six P-38 Lightnings were flying to Iceland en route to the European war theatre.

Bad weather and dreadful conditions meant, finally, that the pilots became disoriented, and when they finally had some visibility they realised that they were over Greenland, and the only place to go, given how little fuel they had left, was down on to the ice cap. They all got down. Here is a photo of one of the P-38s, post-landing.

Amazingly, none of the personnel was killed or wounded, and all survived ten days on the ice without an injury. The planes were abandoned, referred to as ‘the lost squadron’, but not forgotten. Between 1977 and 1990 eleven different teams tried to find the missing aircraft.

The first nine were unsuccessful. There seemed to be no trace of the planes, until the 1988 group found a clue,  then used steam to bore a hole down through the ice, and found parts. The B-17 they located was in bad condition, and they gave it up — the ice had crushed its fuselage. What about the Lightnings?

A further expedition located one, and the men hollowed out the ice around it, excavating quite a cave. Indeed, the P-38 was in much better condition. The plane was disassembled with a certain amount of nervousness. The men found the ice cave to be uncomfortable and treacherous, with very little room to move, constant dripping water, and occasional chunks of ice falling from the ceiling. A few times, a strike of a chisel would send fractures racing across the ceiling of the cave, causing a number of tense moments for workers. 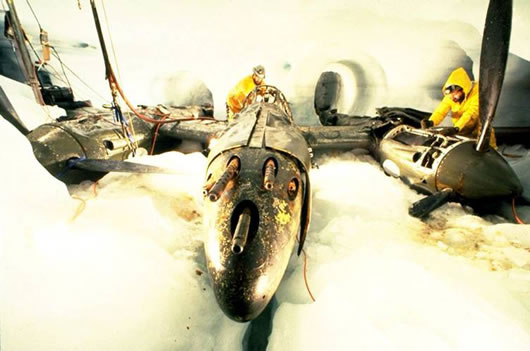 When everything was out of the hole one person who was able to see the plane was one of the pilots on the last flight of the squadron; he was then 74. The pilot of the found plane had already died.

Well, they took all the bits back to the USA and began restoration, which proved to be an immense job. But they persevered, and in 2002 the restored P-38, now named ‘Glacier Girl’, flew again over a crowd of 20,000 people. Here she is.

Only six are left in flying condition of the 10,000 that were made, and you can see Glacier Girl in the Lost Squadron Museum in Middlesboro, Kentucky.

It’s a lovely story, and I like it because I was mad about planes when I was a boy, and could tell you almost instantly the name of any plane that was in the air (and this was at the end of the war, so there were quite a few about, and the closest RAAF base was only eight km away from our house). When I was 13 I joined the Air Training Corps, and my first flight was in a  Catalina, taking off and landing on Lake Macquarie from the RAAF base at Rathmines, long since closed. I have sat in the cockpits of a Mustang and a Gloster Meteor, too (both u/s). Biggles was my hero.

That’s why I liked reviving the story, which you can read here in the original. But it’s not the moral. No, the moral is that when the discovery team found the P-38 it was three miles from where it had landed, and under 268 feet of ice — that’s 82 metres. That much snow and ice had accumulated in 48 years. I don’t suggest that everywhere in Greenland had gained that amount of ice, but the annual rate of ice gain where the Lightning was found was around 1.7 metres per year.

Now there are folks who worry about the Greenland ice cap’s melting, and raising the sea levels by many metres, imperilling harbourside residents all round the world. There are claims that the ice cap is melting as we speak, and we are all doomed. The IPCC claims that Greenland is melting at the edges, so to speak, though there is very little historic observation. Satellite records go back only to to 1979, and much of the literature is based on palaeo evidence of various kinds, and a ‘what if…?’ extrapolation about the present and future.

Well, it does seem that Greenland also accumulates a lot of snow and ice, so I think that it is probably true that we don’t really know all there is to know about the accumulation and melting of its ice. Maybe the place where the planes landed is unusual.

But it does take a great amount of heat to melt ice, and my tentative conclusion is that about the Greenland ice, as elsewhere in discussions about climate, the science just isn’t settled.