Measuring carbon dioxide in the atmosphere

In this essay I return to the SCM paper that I discussed last week, considering this time  what it says about atmospheric carbon dioxide, which for the orthodox is the ‘control knob’ of the planet’s atmosphere. As is well known, the actual amount of the gas in the atmosphere is very small indeed, about 400 parts per million, but is supposed to do its work through the greenhouse effect, by which radiatively active gases, of which CO2 is the most prevalent, radiate energy in all directions, including the surface, thereby warming it. In the orthodox view, again, as CO2 increases so does warming increase, multiplied by ‘climate sensitivity‘, the supposed positive feedback from water vapour and clouds (more clouds, therefore more warming still).

The graph of carbon dioxide concentrations in the atmosphere, that measured at the Mauna Loa observatory on the island of Hawai’i, is well known. 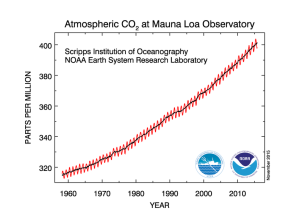 The red line shows the seasonal variations in CO2, while the black shows the average. There is little doubt that the level is rising, at least at Mauna Loa. In summers the plants get as much CO2 as they can, while in winters they are dormant and use little; these conditions explain the jagged line. Most of the jagged effect comes from what happens in the northern hemisphere, where most of the land mass, and the plants, are situated.

So far so good. The SCM paper sets out clearly and simply how and where carbon dioxide is measured, and it takes a dim view of the reliance of climate scientists on the data so gathered. Carbon dioxide, it argues, is part of the carbon cycle, with carbon atoms from CO2 being transferred to various ‘reservoirs‘. There is a constant flow of exchange between reservoirs. During these transfers, reservoirs that release CO2 into the atmosphere are called ‘sources‘, and those that consume it are called ‘sinks‘. The sea, for example, is both a source and a sink. The carbon cycle makes it difficult to determine the life span of CO2 in the atmosphere, which is why scientists focus more on its concentration.

The composition of the atmosphere at any place and at any time depends on pressure, temperature and the extent to which other gases are diluted in water vapour. To obtain a measurement that is not dependent on these parameters, you have to measure the number of CO2 molecules in one million molecules of dry air. This measurement is expressed in ppm (parts per million)…

Although Mauna Loa is accepted as the standard for atmospheric measurements of CO2 (mostly because the observatory is at 3394 metres and is thought to be relatively free of human or other biological influences, and measurements are taken only from readings at night-time, when the flow of air is from high to low) there are other stations and, says the paper, they provide different outcomes. There is much greater variation at Barrow in Alaska than at Mauna Loa, while the variation at the South Pole is very small. Nonetheless, as I see it, the fact that the trend lines at these four sites are the same suggests not only that the general trend is accurately measured, but that CO2 is also a reasonably well-mixed gas.

The SCM paper is less sanguine. It points out that measurements are taken not only at baseline observatories like Mauna Loa, but at tall towers, and at the surface. It would like much more data, and has tables showing that there is variation at all of these sites. It argues that the distribution of sensors is poor, with most being in the USA or Europe (true), while the data are not only insufficient, but they  have been interpolated (and the raw data are not available). I’ll come to my reactions at the end.

Then the paper considers the work of Ernst-Georg Beck, in which samples of air are subject to chemical analysis in laboratories. These measurements are taken mostly in rural areas or on the outskirts of towns and cities. This work has been going on for almost two centuries, and its results show much greater variability than, for example, those from Mauna Loa. But the paper doesn’t like them either, for reasons of location, though it notes that the data collected by this method do not make it possible to conclude that CO2 concentrations are rising.

Nor is the paper happy with ice-core measurements, for reasons that will be familiar to anyone who has studied this issue. Briefly, the gas can dissolve, while the deeper the crystals the more compacted they are, which greatly widens the error bars around timing. Nonetheless, the rising and falling trends associated with ice ages are clear enough. The paper is equally unhappy with analyses using the stoma of fossilised plants, because the errors are around 60 ppm.

All in all, the paper is deeply critical of what is done. For my part the criticisms seem well-founded, but the conclusions drawn from them are over-stated. What do we want to know? That is the first question, to which the answer probably centres on whether or not the concentration of the gas is rising, and if so, by how much. I think that the conclusion we can draw from the data is that the proportion of carbon dioxide in the atmosphere has been rising steadily, at least since the Mauna Loa and companion stations have been established, which is 1960.

The second question is probably whether or not the increase is or ought to be a worry, and the paper makes an off-hand remark to the effect that if increased CO2 leads to warming, then France could do with a good deal of it. My own interest here is in the flow of the gas between sources and sinks, but the paper doesn’t get into that game of estimation at all, though I would have thought it something that ought to have been considered. I’ll leave that to another post on another day, with just the comment that on the evidence I have seen, the human contribution to that flow is likely to be small.

Finally, the paper does not refer to, and could not have referred to, the NASA orbiting CO2 observatory, which has very recently produced this image. 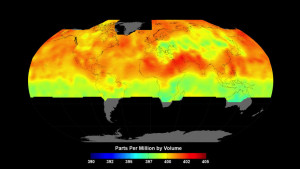 Most of the southern hemisphere is not shown, which is a pity, and the colouring is of course a form of (in this case tendentious) artistic licence. The range shown is about 10ppm, or about 2.5 per cent, which is further evidence to support the view that CO2 is indeed well-mixed. I don’t think that too much should be made of the fact that Australia shows a low CO2 score, as does much of Russia.

Once again, I appreciated the assembly of methodology that the paper was able to produce with respect to measuring carbon dioxide. But, in contrast to my reaction to the CSM paper’s approach to measuring temperature, I felt that its ‘critical analysis’ was a bit OTT, finding fault but making too much of the consequences of the faults. In a later post I’ll look at the CSM paper’s analysis of the measurement of sea-levels, a subject dear to my heart.

Footnote:  In truth, we simply don’t know a great deal about the sources and sinks of CO2, and the flow among them. Everything, reasonably enough, is based on estimates.  Tom Quirk has a fascinating piece about one aspect of it here.