Is the tide turning?

Even before the election of Donald Trump I had begun to think that there seemed within the body politic to be a move away from the notion that some kind of catastrophic doom faced humanity unless we kept carbon dioxide concentrations to 350 ppm/reduced greenhouse gas emissions/stopped mining coal/all bought electric cars, and the like. Now that President-elect Trump has set out some of what he proposes to do in the ‘climate change’ area, it seems that even in the mainstream media statements are being made that would have been unlikely before that Tuesday in November.

What has drawn my attention are statements from a few well-known people. Judith Curry has drawn some of them together on her website, but you need to go to each of the original statements. I won’t even try to summarise them, for there are too many, and their content is rich. The first is from Roger Pielke Jnr, who wrote a piece for the Wall Street Journal. I cannot regain access to the original story, but the essence of it is simple: he was pursued, unrelentingly, by Climate Botherers, politicians and the media, for having said that there was no real evidence that extreme weather events had increased in recent years.  What follows are his words.

I believe climate change is real and that human emissions of greenhouse gases risk justifying action, including a carbon tax. But my research led me to a conclusion that many climate campaigners find unacceptable: There is scant evidence to indicate that hurricanes, floods, tornadoes or drought have become more frequent or intense in the U.S. or globally. My conclusion might be wrong, but I think I’ve earned the right to share this research without risk to my career. Instead, my research was under constant attack for years by activists, journalists and politicians.

The scale of the attack on Pielke Jnr was just astonishing, and you need to read its compass in the extract. He finishes like this, and as an ex-academic, I have a good deal of fellow feeling: … the lesson is that a lone academic is no match for billionaires, well-funded advocacy groups, the media, Congress and the White House. If academics—in any subject—are to play a meaningful role in public debate, the country will have to do a better job supporting good-faith researchers, even when their results are unwelcome. This goes for Republicans and Democrats alike, and to the administration of President-elect Trump.

His father, Pielke senior, a senior and well respected climate scientist, took the opportunity to remind readers of what had happened to him rather earlier. Same sort of stuff. You can read that here. Of course, Judy Curry has herself been the focus of a lot of hostile treatment of the same kind, as has Matt Ridley, who is more a journalist than a scientist. He too joined in this season of revived confidence in saying what one believes in, with good argument and evidence. He is so quotable, and again, I have a strong fellow feeling.

I am a climate lukewarmer. That means I think recent global warming is real, mostly man-made and will continue but I no longer think it is likely to be dangerous and I think its slow and erratic progress so far is what we should expect in the future. This view . . . is even more infuriating to most publicly funded scientists and politicians, who insist climate change is a big risk. I was even kept off the shortlist for a part-time, unpaid public-sector appointment in a field unrelated to climate because of having this view, or so the headhunter thought. In the climate debate, paying obeisance to climate scaremongering is about as mandatory for a public appointment, or public funding, as being a Protestant was in 18th-century England.

The one whose thoughts were most striking, I thought, was Scott Adams, he who writes  the Dilbert cartoons, one of which I used at the end of an essay here some time ago. Adams predicted the Trump electoral victory, and what he said and had said was one of the reasons I was not surprised at the outcome of that election. He is another who writes clearly and sensibly and, once more, a lot of what he says resonates with me. Here’s how he starts.

Before I start, let me say as clearly as possible that I agree with the scientific consensus on climate change. If science says something is true – according to most scientists, and consistent with the scientific method – I accept their verdict. I realize that science can change its mind, of course. Saying something is “true” in a scientific sense always leaves open the option of later reassessing that view if new evidence comes to light. Something can be “true” according to science while simultaneously being completely wrong. Science allows that odd situation to exist, at least temporarily, while we crawl toward truth.

Here, at once, and again, is a pointer to one of the great evils of our time. It is not simply that the solidity of climate science seems to me not to justify carbon taxes or great subsidies for unreliable alternative energy sources. It is that if you have a job of some kind that brings you into the public gaze, you may not say so. It is more than your job is worth. Pielke Jnr discovered this, to the point where, at one stage, he wrote in his website that he would no longer write about climate science. It just wasn’t worth it. If I were a vice-chancellor today, I would be unable to speak out as I have done in the last four years. At my time of life I have no obligations to anyone or to any organisation. I can say it as I see it. I may be wrong about things — it would be astonishing to find anyone who was always right — but I can say it, and bear the criticism, because it rubs off on no one else.

Adams offers a set of of principles to guide people in assessing something like the ‘climate change’ issue. A lot of it looks pretty sensible to me.

It seems to me that a majority of experts could be wrong whenever you have a pattern that looks like this:

1. A theory has been “adjusted” in the past to maintain the conclusion even though the data has changed. For example, “Global warming” evolved to “climate change” because the models didn’t show universal warming.

3. The models require human judgement to decide how variables should be treated. This allows humans to “tune” the output to a desired end. This is the case with climate science models.

4. There is a severe social or economic penalty for having the “wrong” opinion in the field. As I already said, I agree with the consensus of climate scientists because saying otherwise in public would be social and career suicide for me even as a cartoonist. Imagine how much worse the pressure would be if science was my career.

5. There are so many variables that can be measured – and so many that can be ignored – that you can produce any result you want by choosing what to measure and what to ignore. Our measurement sensors do not cover all locations on earth, from the upper atmosphere to the bottom of the ocean, so we have the option to use the measurements that fit our predictions while discounting the rest.

6. The argument from the other side looks disturbingly credible.

This is how he finishes, and I call for three loud cheers:

As I said above, I accept the consensus of climate science experts when they say that climate science is real and accurate. But I do that to protect my reputation and my income. I have no way to evaluate the work of scientists. If you ask me how scared I am of climate changes ruining the planet, I have to say it is near the bottom of my worries. If science is right, and the danger is real, we’ll find ways to scrub the atmosphere as needed. We always find ways to avoid slow-moving dangers. And if the risk of climate change isn’t real, I will say I knew it all along because climate science matches all of the criteria for a mass hallucination by experts.

As it happens, I’ve had thirty years of assessing the work of researchers of all kinds, at least with respect to whether they should be given public money to do what they say they want to do. But with the rest of Adams’s conclusion I can only say that it is wonderful that people now feel they can say these things.

For a little gentle humour at the end, I offer a cartoon generated after Governor Jerry Brown signed a bill to force farmers to regulate the methane emissions from Californian cows, among other problems facing that State. As I understand it, regulations have yet to be drafted, and concerned cows are complaining that they weren’t consulted. 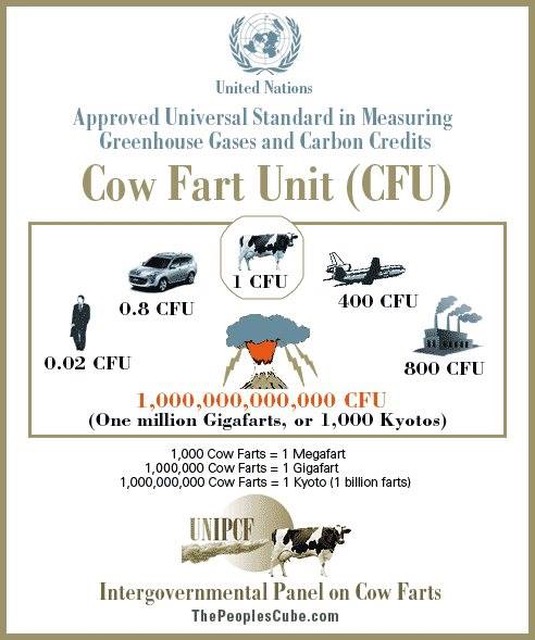 Endnote: The graph below shows carbon dioxide at Mauna Loa and a global average temperature estimate. I offer it, without comment, as a contribution to what is becoming a lengthy discussion in the Comments. The vertical axis shows the atmospheric CO2 concentration after removing the annual seasonal variation, while the temperature measurements are for the lower troposphere and are those of MSU v6. 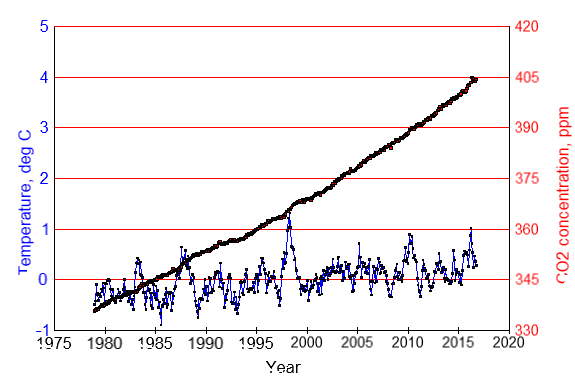