When I was about seven years old I was allowed to go to the Saturday matinee with another boy my age who lived across the road. We walked there and back (perhaps a kilometre), and we each had six pence. Threepence would get us into the pictures, while the other three pennies were for sweets. A small ice-cream in a cone would require the lot, so I tended to buy a musk stick (1d) and a small packet of jubes (2d). What we saw, every Saturday, were cartoons, a Movietone newsreel and a Western. I don’t remember a serial, although I saw a lot of them later in another town.

The standout Western hero for me was Hopalong Cassidy. He didn’t sing, unlike Roy Rogers and Gene Autrey, his Saturday matinee rivals. His films had loads of action, lots of men falling off horses, and very familiar Californian scenery. I loved them all, and from about 1944 to 1949 I must have seen something like 250 Westerns, all of them the B-grade, black and white, no-romance films that kept kids going to the movies. In 1950 I got much more interested in tennis, and went to the Saturday arvo movies only when it rained.

Fast forward to the mid 1970s. Someone of a like age told me about a film he had seen, Blazing Saddles, that had left him sick with laughter. ‘Every cliché in the Western book,’ he cried. ‘You’ve got to see it!’ And in due course I did, and I laughed so much that I missed great chunks of the dialogue. Someone else told me that there were something like three thousand jokes or visual plays in the film, and I have seen it in the cinemas half a dozen times, and have my own DVD as well. But unless they’re my age no one else thinks it’s as funny as I think it is, and I’m sure the reason can be found in the diet of Westerns I watched every Saturday when I was a boy. You have to have been subjected to that exposure to really appreciate the film.

There are critics who think that it is the best comedy film ever made. I can’t speak to that, but Mel Brooks, who produced it, and acted as the corrupt Governor, has stated straightforwardly that you could not make such a film today. Blazing Saddles is about a black sheriff who encounters racism everywhere in the town whose citizens he is protecting. ‘What a nice day!’ he carols to an elderly lady in the main street. ‘Up yours, nigger!’ she retorts, and passes by. The crudity of the racism is the point of the plot, and of course the film is a straightforward attack on the overt and hidden racist culture of 1974 USA. Maybe things have improved there, as they have improved here.

But Mel Brooks’s critique of 2017 political correctness arrested me. I can’t find the original source, but the link above contains this: Society’s “stupidly politically correct” sensibilities will lead to the “death of comedy”, the veteran Hollywood comedian Mel Brooks has warned. Brooks, known for his plethora of acclaimed comedy movies, said political correctness was becoming a stranglehold on comedians. “It’s not good for comedy. Comedy has to walk a thin line, take risks,” he said.

Much comedy, like Brooks’s films, satirizes contemporary society by holding some of its current assumptions up to a strong light, and making fun of them. And comic geniuses, as Brooks implies, tend to run risks, for those satirised are often powerful. The French playwright Moliere (Jean-Baptiste Poquelin) wrote brilliant satires about the France of Louis XIV and its society, and was always in trouble with those whom he satirised. Satire is as old as human society, and we can all laugh at the targets as long as they are not ourselves.

Mel Brooks thinks that ‘political correctness’ is strangling comedy. I’m not really persuaded. ‘Political correctness’ is present in all societies at all times, I think. It’s not something that we’ve never seen before. When I was young it was politically correct to behave in certain ways in public: stand for the King’s image that appeared before the movies; take your hat off in certain places (and we all wore hats); denounce, or at least disapprove of, Communists and the Soviet Union; go to church on Sunday, or at least not obviously devote Sundays to work in the public gaze. And so on. This sort of political correctness represented the views of the conservative side of politics, and people like Barry Humphries were soon to satirise them, and the social complacency that underpinned them.

What we have now is the political correctness of the Left in politics, because by and large the Left is in the ascendant. In most of human history the mockery of society came from those opposed to the current order — kings, courts and the bourgeoisie. When the mockers are in charge, however, who is to tweak the fads and fashions of the day? Matt Ridley, he of The Rational Optimist, despairs of there being anyone, and worries that the enlightenment might be turning into some kind of ‘endarkenment’. Again, I am not wholly persuaded. No set of ideas is ever in the ascendant forever, and already there are signs that the current correctness is waning. I would agree that it is much harder for mockers of the Left than it was for mockers of the Right, party because today’s media are already part of the correctness, and part;y because the traditional mockers are part of the Left . John Spooner, a cartoonist for The Age, managed a few cartoons that poked fun at the ‘climate change’. Suddenly, he and the newspaper had parted company. The recent ‘vote’ about same-sex marriage was greeted by the media almost with ecstasy, as though all Australians were thereby lifted from a wicked witch’s curse, rather than a desired change in possibilities for perhaps two per cent of the population had now become a reality. It would be hard to get in a cartoon sending up some of that fervor into any mainstream newspaper. A couple of years ago, however, I saw one somewhere in which the wife says to her husband, watching TV, ‘It looks as though gay marriage is getting closer.’ Still watching the set, he responds, ‘The poor things. Haven’t they suffered enough?’ I don’t think anyone would have published that little pin-prick recently.

In the former Soviet Union the state apparatus controlled all formal publishing, and little that was critical of the system was ever published. There existed an informal publishing industry that produced samizdat, usually anonymous tracts, sometimes quite long, which were passed from reader to reader. And mockery became verbal. Soviet jokes were all highly political, and cutting. They were called anekdoti, and listening to one, or worse, telling one, could come with risks. You can read a few of them by going to an earlier essay of mine.

Here is one that captures the essence of the anti-Soviet mockery: Which is better, you are asked, a communist hell or a capitalist hell? Answer: The communist one of course! Why” Well, there is always a shortage of matches and fuel, the heaters are out of order, and the devil and his creatures are busy with party meetings.

I expect to see more lampooning of current political correctness, at first just a little bit satirical, in the theatre, then more pointedly, in cartoons and newspaper columns. I’m happy to publish any good ones, always, of course, with the permission of the author.

LATER: Well, here’s one that seemed to me to fit the description of a jest at the current ruling orthodoxy: 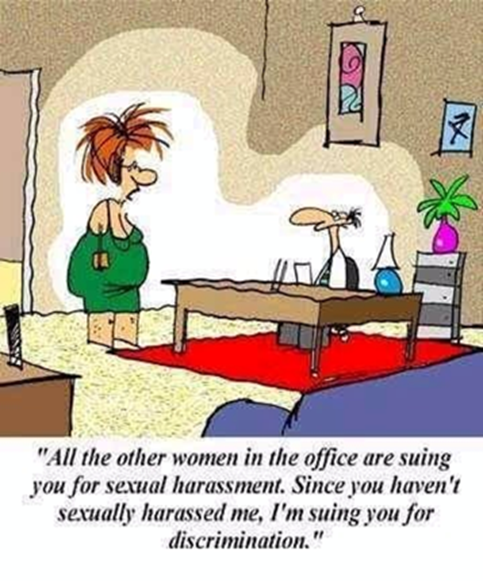