If the science is settled, why do we need all these people working at it?

I had hoped to spend more of my time and energy on subjects other than ‘climate change’, apart from completing my ‘perspective’ summary. But in the last few days there has been some ‘news’ in this domain, and this  post is devoted to it.

I begin with the email that the CEO of CSIRO, Dr Larry Marshall, sent to his staff, letting them know that about 350 jobs would be terminated, a lot of them in the ‘climate change’ area. That was bad enough , as far as climate botherers were concerned. But it was his rationale that really stirred them up.

“We have spent probably a decade trying to answer the question ‘is the climate changing?'” he told Fairfax Media.
“After Paris that question has been answered. The next question now is what do we do about it? The people that were so brilliant at measuring and modelling [climate change], they might not be the right people to figure out how to adapt to it.”

Around the world, at least the blogospheric world, that explanation, in its dreadful simplicity, has left both botherers and sceptics open-mouthed. If the science is really settled, then we don’t need people who have shown this to be the case. They might as well go to other virtuous pursuits. The cartoon by Josh (http://www.cartoonsbyjosh.com) appeared in the UK and USA simultaneously, and is reproduced here with permission. The figure holding his ice-hockey stick is Michael Mann, who did not work for the CSIRO, thank goodness. 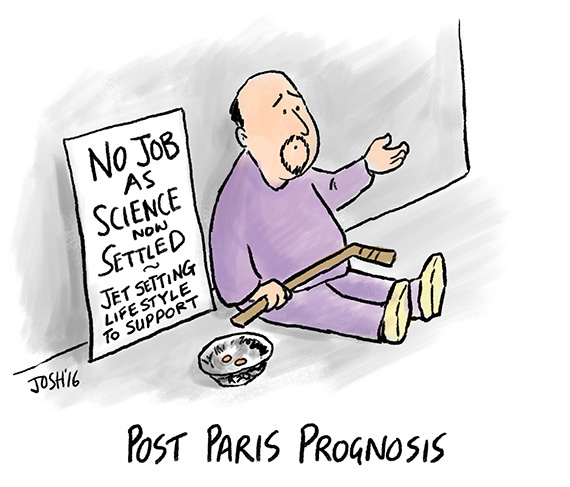 The botherers, in particular, have been caught on the hop. What has been their response? The President of the Australian Academy of Science was forced to use a pathetic sporting analogy.

Our climate and environmental scientists are some of the best in the world. We wouldn’t stop supporting our elite Olympic athletes just as they’re winning gold medals. Nor should we pull the rug out from under our elite scientists.

The gold-medal equivalents our ‘elite scientists’ have won seem to me hard to find. No matter. That link will lead you to a dozen or so shock/horror reactions, from people who have either been in the Australian ‘climate change’ community or are colleagues from afar. How can you do this? they keep asking. We thought this was going on forever. I am reminded of the Peter Sellers portrait of Harold Macmillan as Prime Minister saying, sententiously, ‘When I said “You never had it so good!” — I didn’t mean that good.’

The trouble is that if you want to respond, as they all do, that climate science isn’t really settled, you will become another kind of denier, because Al Gore said the science was settled nine years ago, and the phrase has been official mantra ever since. Now if it’s not settled, then perhaps we should be looking past carbon dioxide and much harder at the interactions of natural variability and greenhouse gas emissions, or at climate sensitivity, or at clouds, or at the data that we have for temperature, and the dreadful contortions that some climate scientists get into  when they ‘grab the data by the throat and scream “Speak to me!”‘ — a line I heard fifty years ago in the US about the perils of factor analysis.

And that brings me to the second piece of news, which is an essay by Kip Hansen published by Judy Curry on Climate etc. ‘Can we hit the ‘Restart’ button? he asks, and he means by that a new direction of climate science research. Hansen is a climate writer (he has published some good essays at WUWT). This is also a good piece, and I was struck by this largely rhetorical question.

Has Climate Science become hopelessly bogged down? Has Climate Science reached a point where misbehaving programs [paradigms] are using 99% of research efforts and thus draining away – frittering away – the field’s resources? Are far too many precious hours, days, years being spent fighting the Climate Wars – the deadlocked scientific and policy debate surrounding climate change issues – defending scientific positions, many untenable, most based on their policy implications, rather than attempting to discover the underlying nature of the Earth’s climate itself?

I think the answer is ‘Yes’. Not everybody does, of course, and as usual the Comments section for this Climate etc essay are thoughtful and helpful. Kip Hansen’s horizon here is wider than Larry Marshall’s, but one can detect in both an impatience to get out of the deadlock we are in. Judith Curry herself has written posts with the same message, and you will see links to them there.

Finally, Dr John Christy, who is one of the satellite database gurus, gave some more testimony last week to the US House Committee on Science, Space & Technology, and submitted a written paper to accompany it. This paper is a marvellous piece of work, particularly in his careful and comprehensive account of how the satellite measurements of temperature are achieved, and why they are superior to the land-based and sea-surface temperature datasets.

His main support is that that the two satellite datasets not only accord with each other but they also accord with the radiosonde balloon measurements which  are quite separate in character, organised by different people altogether, and have been going for much longer than the satellites. He shows a comparison of the measurements taken by the satellite and balloon measurements, the latter at 59 American and Australian balloon sites; the correlation is 0.98. Moreover, while these measurements are steady, and show little change over the past 37 years (the balloons show an increase of +0.079 degrees Celsius per decade, the satellites +0.091 degrees C) the average of the GCM model runs over  the same period show an increase of +0.214 degrees per decade — and the disparity between them widens each year. Something is wrong with the models.

Christy is  well-published climate scientist, and is not easy to disregard, though of course the climate establishment tends to ignore what he says. His long section on models and modelling is very good indeed and, following on from his comparison of models with observations, I finish with this wise summary of climate science today:

A fundamental aspect of the scientific method is that if we say we understand a system (such as the climate system) then we should be able to predict its behaviour. If we are unable to make accurate predictions, then at least some of the factors in the system are not well defined or even perhaps missing… merely replicating the behaviour of the system (i.e. reproducing ‘what’ the system does) does not guarantee that the fundamental physics are well known. In other words, it is possible to obtain the right answer for the wrong reasons, i.e. getting the ‘what’ of climate right but missing the ‘why’.

There is such a lot of good stuff in this paper. I recommend it without reservation.