I think that the IPCC has given ‘catastrophe’ away

The IPCC’s Working Group I Draft Report is about as hard to read as anything I’ve ever tackled. It is as though the language has been used deliberately to obfuscate — to make the reader give up in despair. In comparison, its counterpart in 2007 was relatively accessible.

While I’m going through the early bits, others have fastened on whatever it is that is their chief interest, and a number have fixed on Chapter 12, and the section in it on what the authors call ‘Potentially Abrupt or Irreversible Changes’. A few years ago these were called ‘tipping points’ that would lead to ‘runaway warming’. These tipping points were to be avoided at all costs. We had to curb greenhouse gas emissions — Now! If we didn’t our grandchildren would blame us for the calamities that would befall them.

Well, things have changed. The authors of the chapter now define a change in the climate as ‘irreversible’ if the recovery from whatever it is takes longer than the time it took for the change to reach that point. Got that? But by that definition things don’t look as dire as James Hansen, in 1988 and later, and Al Gore in his film, would have had us believe. The chapter takes us through all the possible disasters, and effectively rules them out. You can see it in Table 12.4, which follows. I mentioned all the italicised modifiers in a post last week. 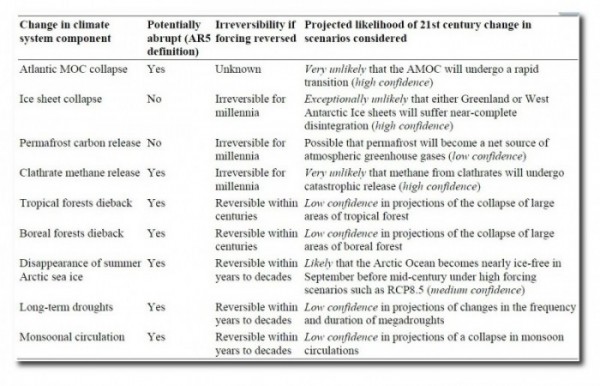 Do you remember the specific warnings about what might happen? Perhaps the most dramatic was the rapid melting of the ice-sheets of Antarctica  and Greenland, which make up much the greater part of the world’s ice that is land-based. We kept getting stories of how this would raise the seas by metres, submerge Bangladesh and Manhattan, and so on. Well, that’s apparently not on. Nor, say the authors, will subsurface methane explode and hit us with the equivalent of umpteen hydrogen bombs.

Then there was the thermohaline circulation in the oceans, whose pattern helps to give us the climate and weather that we are used to. Those melting ice-sheets were going to muck all that up, with unknown but dire consequences. Droughts and failing monsoons, an end to the Amazonian rain-forest? Nah — they now all seem pretty unlikely. An ice-free Arctic Ocean, prophesied for 2015 by somebody a few years ago? It is likely that it might become nearly ice-free in September, not by 2015, but sometime before mid-century (2050?), if one or other of the models prove to be correct. Wow! That is persuasive!

In fact, it was the impending catastrophe to be ushered in by global warming, as I said above, that caused all the pressure to create a global treaty that would save humanity from its own wrong-doing. This section in the WG1 report, at least to my reading, simply says that there is no impending catastrophe. Or, since the IPCC relies much more on its models than on any observations, the report in effect says that it can’t model any changes in the coming century that fit its definition of ‘abrupt or irreversible change’. There don’t seem to be any such changes that are likely in the next century.

That doesn’t mean that we won’t experience them, since we have had huge volcanic eruptions in the past, and are likely to experience them again. We have had major tsunamis in the past two decades, and another, much larger, is conceivable. The point is that these events have nothing whatever to do with carbon dioxide. Like the fires, floods and droughts that Australians all know, they are potentially preparable for. And again, preparing for them has nothing to do with reducing greenhouse gas emissions.

What fascinates me, about this whole report, is that nonetheless the IPCC maintains  great confidence that humans are warming the globe and that warming is bad. In the context of Table 12.4, where does the urgency come from? Why should we do anything now, other than try to learn more about climate’s natural variability, and what causes it? And prepare, as we are doing at least to a degree, for the natural climate events that cause us pain and great expense.