How (not) to argue

When I came across the Christoff post in The Conversation, which I referred to yesterday, I was struck once again by the poor quality of the arguments in the comments section. What I found were nearly 200 comments of which only a few could be described as  productive and useful. Most posters  were passionate adherents of the AGW scare, and their general tactic was to reject outright anything offered that was not consistent with their beliefs.

Further, a few of them seemed to spend their lives on the computer, waiting for another opportunity to reject. At a rough count, 35 people took part in the discussion, 26 from the orthodox side and nine dissidents. One or two were hard to place. I’ll come back to the discussion in a moment.

I wondered how many of those who took part had any real sense of how to argue about something, and I offer the following diagram, which is a visual version of Paul Graham’s Hierarchy of Disagreement. Graham is a programmer, venture capitalist and essayist, and I 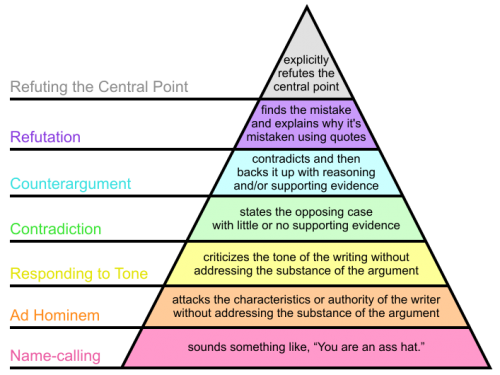 think his little schema is an excellent way to look at the forms of argument we find both on the Internet and in general conversation, letters to the editor, and the like. There are other ways of setting out the many faults in argument (the argument from ignorance, the argument from authority, the argumentum ad hominem, and so on), but I like this one.

I accept that without having read Christoff’s book it is unfair to speak against it, but then Christoff has written about it at least twice, so I think I know what he is on about. If I’m wrong someone is sure to tell me. He is not, so far as I can make out, a climate scientist, but a policy person, as I am. Again, as far as I can see, he takes for granted the rather more extreme version of the orthodoxy of global warming, and then asks what will happen to Australia if this turns out to be the case, and what should we do about it now.

My response is ‘counter-argument’: wouldn’t it be sensible first to see how likely it is that there will be a 4 degree C rise in temperature? Because the evidence doesn’t seem to support it. I gave the evidence yesterday and in earlier posts. If the likelihood is small or even tiny, why should we worry about it — and why should we do something now to avoid it? I said the same about the Garnaut Report, and would have done about the Stern Report earlier had I been interested in the issue then. All three take for granted a scientific position which, on the evidence, is shaky at best, and full of ‘ifs’.

Perhaps Dr Christoff would have a response to my counter-argument, though none is evident in what he has written. Counter-argument was the approach of one or two sceptics who entered into the debate on The Conversation. Their approach did not engage the defenders. What any reader observed were responses like these:

[It is]Time to acknowledge th[at] climate sceptics belong to the same cluster of creationists, anti-vaccination activists and the like. We give no credence to the those fringe believe[r]s, nor should we [to] the deniers…

… you should be apologising to your grandchildren.

The REAL science is summarised well at http://www.skepticalscience.com/…

The last one is an example of ‘contradiction‘, while the first three sit at the bottom of  Graham’s pyramid. I’m sad to say that a couple of the sceptics went down these lamentable paths themselves:

You warmers are the real deniers.

I gave up on The Conversation when I realised that all you would get in discussion there was abuse, and that the political culture of the organisation was supportive of the need to ‘combat climate change’. Indeed, it doesn’t matter much where you go — it is difficult to find a place where you can engage in a question-and-answer dialogue with people who hold quite different views.

And I think the reason is that these days we all see ourselves as experts in something, and confident of our own knowledge. My position is always to try to find the evidence. If I have to judge something or someone, I need to find out everything I can, not just assume that the first story I heard is the real one. (You only have to get into trouble once, when acting as a judge, to discover that great truth.)

It’s a hard ask, arguing politely and reasonably, listening to the other person’s point of view, and weighing your own. That is why I think of myself as an agnostic in this business, rather than as a sceptic. I hope I am generally sceptical, and in the case of global warming, I can concede that adding more carbon dioxide to the atmosphere ought, other things being equal, lead to an increase in temperature.

But other things are not necessarily equal, and warming seems to be good for the biosphere, rather than bad. I await compelling evidence that a dire future awaits us, and in the meantime I do my best to operate in the top three sections of Graham’s pyramid.