Global warming and ‘climate change’ in the press

I listened last week to an astonishingly ignorant radio interview of a professor of journalism who had measured the proportion of news stories in the Australian press that dealt with ‘climate change’ between 2011 and 2012 in the same three-month periods, and had discovered not only that the numbers declined over the period but that the proportion that seemed sceptical in tone had risen. ‘Quite extraordinary’, said the professor, and went on to say that scientists and journalists were both seekers after the truth, and when 97.4 per cent of scientists said that human beings were caused climate change, and they (the scientists) are truthful, why would newspapers be saying in effect that ‘climate change’ was a matter of open debate?

The interviewer asked whether or not that meant the press was ‘dismissive of the science’ and then, getting agreement, asked why it could be so. The professor then seemed to me to launch into an attack on Andrew Bolt, and argue that despite the (Murdoch) papers’ saying that they ‘accepted the science’, they were covertly allowing Bolt to lead a campaign against the science. She praised the Fairfax papers for refusing to publish sceptical letters, and finished with the plaint that Australia didn’t have a media consensus that reflected the scientific consensus.

I think I’ve reported the exchange faithfully, and you can hear it all here for yourself. Yes, of course it was the ABC. The idea that the media should practise a ‘consensus’, and refuse to publish sceptical letters on any subject that depart from the consensus, strikes me as a monstrous position for someone in journalism to put forward. And the blinding ignorance both of the interviewer and the professor about ‘the science’ was a tribute to what I am increasingly calling ‘the religion of climate change’. If you believe in it, it doesn’t matter what the facts or evidence are.

The fabled 97.4 per cent of scientists who represent the fabled ‘consensus’ has been ripped apart again and again. The paper by Lewandowsky that put it forward is one of the most embarrassing pieces of social science I have seen published, and I wrote about it here. Don’t they know anything about its (lack of) substance? And both need to know that the question is not whether human activity has any effect on the climate of the planet, but whether or not the effect is discernible, unprecedented, and potentially dangerous — matters about which there is no settled science.

But I thought it might be worth pointing out that no one needs to do the sort of study that the professor undertook. Much of it has already been undertaken, and by a number of different bodies. The graph below is an example of one such, undertaken by a group in the University of Colorado at Boulder. If you go to its website you can run a similar graph just on Australia, which is very similar to the line here portraying Oceania. 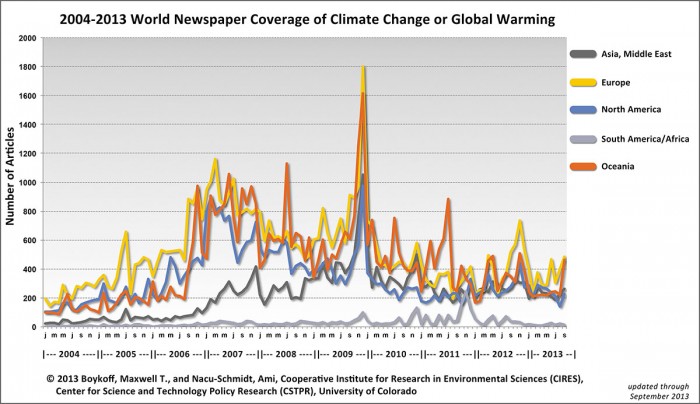 What it tells you is that there have been two high points for ‘climate change’ in the media. The first was when the IPCC published its 4th Assessment Report in 2007. The second was when the Copenhagen Conference was held, at the end of 2009. The two blips for Oceania alone I would put down to drought and then flood. At the very end of the graph you can see a little rise, presumably occasioned by the release of the 5th Assessment Report of the IPCC. My guess is that will quickly drop from sight. Incidentally, you can see another compilation, this time of press, blogs and related media, here.

There is no need to demonise Andrew Bolt. He doesn’t have to do anything other than pick up the fact that interest in ‘climate change’ has declined. Why has it declined? Because there has been a long pause in the warming, the models that portrayed doom have been shown to run too hot (they give too much weight to the power of carbon dioxide), and people are tired of paying too much for energy when there is no obvious reason to do so. ‘Climate change’ has had its day, and won’t recover unless there is a marked return to rapidly rising temperature, and even if that occurs, people will be wary. There has been far too much of boys crying ‘wolf!’

All in all, it’s time for a new scare, and a requiem for dear old Climate Change, as I wrote on Saturday. Maybe water will be the next scare, and I’ll write about that possibility in a day or two.