Does Australia have a ‘political crisis’?

This is my last reflection on what Paul Kelly has called ‘the Australian crisis’, his proposition that our political system is now unable to deal with reform of any kind, because the politicians find it just too hard. One cause is that our politics is almost completely adversarial, and another is that the electorate does not understand the  realities of our political economy. We have become too used to annually increasing wealth.

I mentioned in one of the earlier posts that he argues that with respect to politicians we seem to move quickly from adulation to contempt. It may be that we are returning to an era of short-term governments, which enter on their term because of total dissatisfaction with their predecessors, and are in turn tossed out by an equally disenchanted electorate. Nothing much gets done at such times. What is it that has to be done, you ask. To that in a moment.

But we can notice, in support of Kelly, that the Baillieu/Napthine Government in Victoria lasted only one term, that the LNP in Queensland is only marginally ahead of an ALP that was thrown out of office only one term ago, and that the Coalition in NSW will probably get back in its coming election, but with a much reduced majority. Federally, the Coalition is way behind Labor, and is only halfway through its term. Is this a crisis?

Not really. There have been electoral phases like this before, and opinion polling is only a rough guide to outcomes. But we need to consider Kelly’s point about the difficulty of undertaking reform. We are only fifteen or so weeks away from Joe Hockey’s second Budget, and it seems that aspects of the first one are still in contention. What will happen to the second? Perhaps more important, what will the second Hockey budget be about?

I do think that there has been a marked reluctance by the ALP, the Parliament and the mass media to accept that the six-year Labor Government spent far too much, and that it committed future governments to a continuation of that spending. Yes, there was the global financial crisis, and some of that spending was necessary. But when that was over there was no return to economy or thrift. Instead, more was promised, as though the money-tree was having a second crop.

Instead, there was a rapid decline in our terms of trade, our export earnings and government revenue. For too long Treasury kept reassuring the Government that there would be an uptick. It never came. The first Hockey Budget was tough, but you would expect that. The response was that the Budget was unfair, because too much of its economies fell on those least able to afford them. The trouble is, that far too much of the Budget is a transfer system, exacting money from those able to pay taxes, and handing it over, in divers way, to those who don’t, or who pay little. The following graph, which appeared in an earlier post, sets out the problem. 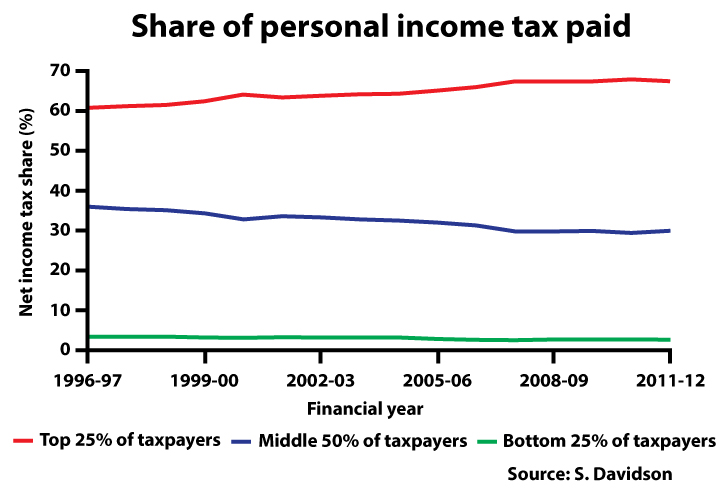 Societies have a choice in all this. You can ask the people who already pay 95 per cent of the income taxation to pay even more than they presently do, or you can reduce the transfers, or you can increase the GST level. You can increase company taxation. There is anguish whatever you do. Some people depend on the transfers. Those who already pay a lot of taxation (mostly wage and salary-earners, who can’t offset easily) feel angry that they are to pay more. Increase company taxation and you reduce the incentive to create jobs.  Increase GST? Well, the States would get it.

The Coalition is of the view that people pay too much tax anyway. Its position is that we are all expected to have a job and look after ourselves and our dependants. That is the responsible thing to do. The Government’s task is to ensure that the economy is strong and that jobs are plentiful. It can tweak a bit, but tweaking is not the aim of the game. The expectation that tightening our belt is really unnecessary, because Australia is doing well in comparison to other countries, seems a tad on the loony side to me, whoever says it. And it is loonier still when you look at the great decline in mining revenue, and the number of companies in that sector that are closing down mines, laying off people or having other troubles.

The Greeks are congratulating themselves on the election of a government that is going to stand up for Greeks against the perfidious Germans and other Europeans who lent them lots of money, and want it paid back.  No! say the Greeks, you’re wealthy, so you can afford to wipe off our debt. I think that there are echoes of that sentiment across our country, and it’s no more sensible here than it is in Greece.

There is, of course, a way out — for Australia, anyway. If we do not make appropriate reductions in public expenditure there will be a reluctance on the part of overseas lenders to provide loans, our interest bill will become an ever-larger proportion of our government’s budget, and we will soon be back in the dark days. It happened in the late 1920s. it happened again in the stagflation period of the 1970s, and happened briefly in the early 1990s. It’s a bit like war. We have generations now that have no memory at all of the Second World War, the Korean War of or the war in Vietnam. War sounds exciting to some, especially those who have never experienced it.   We have had twenty years of continual prosperity.  Affluence is seen by younger people as the natural order of things. If it is declining, then it must be the government’s fault.

I feel like many others with whom I’ve talked. I would be most apprehensive about any return of the Labor Party, given the dysfunctional ALP government of 2007-2013. But I confess to a deal of disappointment with the actions so far of the Coalition Government. I had hoped for a lot better. I accept that the Senate has made things difficult, and  there will be many more who find the position and actions of some of the cross-benchers juvenile and almost intolerable.

But that is where leadership comes in, and we haven’t seen much of it. Yes, we have a crisis, but I think it is a short-term one. Unless there are substantial changes in the Government’s leadership, the outcome will be unpleasant.

I will leave the almost ludicrous BOM/CSIRO report on our future weather/climate until next time.