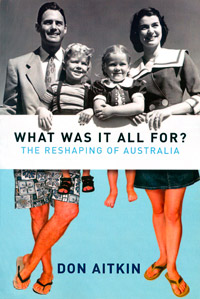 In 2003 I received a letter inviting me to the fifty-year reunion of my Leaving Certificate class at Armidale High School. I had lost touch with nearly all my classmates, and had not much enjoyed my time there anyway. But curiosity won, and I turned up, along with most of the surviving members of the class. Their stories, their careers, their attitudes and their confidence started me on yet another book — the story of Australia in the second half of the 20th century, as shown by the lives of 35 young people who sat their final school examination in 1953, and set out thereafter to find what life had to offer and, by doing so, helped to shape contemporary Australia. Most of them, myself included, were puzzled at the loss of optimism in the new century that had characterised our generation throughout its working life.

I constructed an interview schedule, proceeded over the next year to interview every one of my former classmates, went back to the school to explore school records, and learned a great deal in the process. Hugh Mackay, Paul Kelly and Wendy McCarthy, all of an age to appreciate the story and widely knowledgeable in other ways, liked the outcome very much, and it was published to highly favourable reviews in 2005. You can read more about the book, in the context of my other books, here.