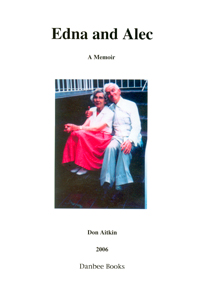 Two young teachers, one in mathematics and science, the other in modern languages, are posted to the same school in Canberra in1929. He thinks she must be a Fifth Year girl, partly because she seems so young, and partly because she is wearing the pleated tunic that was fashionable at the time. They have one year at the same school, and in that year she teaches French to the young Edward Gough Whitlam. The two teachers, now an item, are separated when he is posted elsewhere, but in 1932 they marry.

Their story covers the 20th century in Australia, and tells us a lot about the growth to maturity of Australia, social mobility, education and travel. Edna and Alec were together in marriage for 61 years, were born a year apart, and died a year apart as well. Good parents, and good friends, they were much loved by those who knew them.

This little cameo (58 pp) will probably remind readers of their own family histories, and is available for $7, p&p included. You can read a little more about this little book, along with others, here.