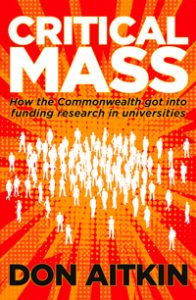 This is probably my last non-fiction book. It is in part of a history of the Commonwealth’s emergence into the major funder of research in Australia, an analysis of the role of research in the higher education system, and — because I was involved in it all — something of an autobiography of my working life. Research is the occupation of around 130,000 Australians, and the great bulk of the funds supporting their research comes from the Commonwealth as a transfer from taxpayers. In 2017 the universities received around three billion dollars in research funding, a third from the National Health and Medical Research Council, a third from the Australian Research Council, and a third more or less directly. The Commonwealth is far and away the great funder of all Australian research and development. Yet the Constitution gives the Commonwealth no powers at all with respect to research, or to universities or even to education.

These were turbulent years, both politically and within higher education, and the after-shocks are still being felt today. The book, written by one of the architects of the change, will be of great interest to all concerned with higher education today, for research is indispensable to Australia’s future as a civilised society, though funding and managing it remains as difficult today as it was thirty years ago.

I started writing this book thirty years ago, and the first version was angrier in tone. The passage of time has allowed me to smile a little at the problems I faced, and at  my rather late discovery that academics and researchers can be as human as everybody else.

It is also available as a Kindle e-book, at $9.99. Just go to Amazon Kindle and search for Critical Mass by Don Aitkin.