My break involved a lot of reading, about which more in a moment. A family Christmas passed cheerfully, and most of the uneaten food went away with the guests, which saved us from our traditional fate of a week-long diet of Christmas leftovers. We were at the foot of Mt Buller on New Year’s Eve, and decided that another good night’s sleep was worth more than waiting up to see fireworks on television. I did watch a good deal of cricket, though, and felt that the India team was unlucky in the tosses, and was just as good a bunch as our own.

I did keep an eye on the weather, and avoided all the fires, storms and deluges. Between Christmas and New Year I was enlivened to learn, from two separate sources and on adjoining days, that the rain we were having was due to the la Nina conditions we were having, while the heat was the result of the el Nino we were having. As I write, the ENSO index is back in neutral; it has been in mild el Nino territory for the past few months. Where the index will go now I haven’t the foggiest idea, and you might agree that here, too, the science isn’t particularly settled.

Well, was 2014 the hottest year ever? It all depends on where you go for information. The Japanese Met agency says it was. The two satellite systems that I take particular notice of, RSS and UAH, didn’t agree.  RSS said 2014 was the sixth hottest, and UAH placed it at #3 . The diagram shows UAH’s tabulation of the annual average anomalies since and including 1998. 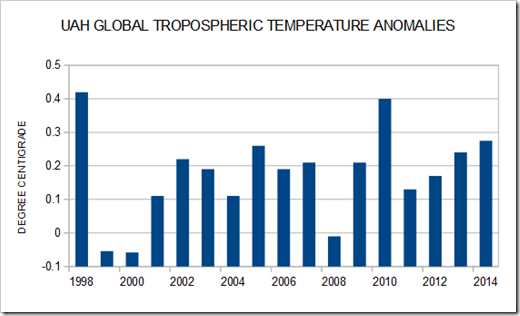 The big outlier was 2010, which rivalled that of 1998 (both associated with strong el Ninos). Yes, 2014 comes next, but there’s not much of a pattern there: three cooling years, three with average anomalies around 0.1C, six with average anomalies around 0.2C, and four with higher scores. They rise and they fall, and all the time more and more CO2 is passing into the atmosphere (to the great delight of plant life).

Dr John Christy, who generally speaks for the UAH results, points out that ‘2014 was warm, but not special. The 0.01 C difference between2014 and 2005, or the 0.02 difference with 2013 are not statistically different from zero. That might not be a very satisfying conclusion, but it is at least accurate.’ He goes on to say that the ‘most recent 13 complete calendar years, from 2002 through 2014, have averaged 0.18 C (about 0.33 degrees Fahrenheit) warmer than the 30-year baseline average, while the global temperature trend during that span was a warming trend at the rate of +0.05 C per decade — which is also statistically insignificant.’

For comparison, the average rate of warming shown by the UAH system since 1978 is 0.14 C per decade. In the most recent period, however, and to repeat, the rate has dropped to 0.05 C. That is barely warming at all. It no longer baffles me that the mainstream media generally report only the scary stuff about warming. Those concerned go to the ‘believers’, who can be guaranteed to see the worst. I’m sure that Nature has some surprises for us in the coming year, but I doubt that rapidly increasing warming will be one of them. To get a broad sense of 2014’s relative heat we will have to wait for a few weeks until the other data sets become available.

I read a lot over the holiday, but the book which stayed in my mind was Paul Kelly’s Triumph and Demise. The Broken Promise of a Labor Generation. I’ve known Paul since the 1960s, and his work is always perceptive, thoroughly researched, and well written. I found it absorbing, and read it from cover to cover. It is about the Rudd/Gillard/Rudd six years, and I was given the second edition, which appeared after Julia Gillard produced her own book. Kelly offers his own book review as the Introduction, and it too is a fascinating read.

There was a time when I could say that I had met every Australian PM since Menzies, but that time has passed — the PMs are all too young now. But I was in two different small groups which  met the recent Labor Prime Ministers. The first was a small group of educators who were given a short session with Julia Gillard when she was Deputy PM and Minister for Education. There were perhaps twenty of us, and I would guess that most were positively inclined towards her, if only because she was thought to be a highly competent Minister and Deputy PM. Alas, she completely misjudged who we were and what we were about, and harangued us as though we were ignorant and misguided opponents. We went away, heads bowed and muttering.

At much the same time I was in an even smaller group that included a former Governor-General, which was to present to the PM the outcome of an important competition: the winner, the two judges, and about five others. Kevin Rudd arrived with an entourage of about forty people, nearly all of them wielding cameras, lights, microphones, clipboards and other impedimenta. They paid no attention to those of us who were to explain, and indeed moved in front of us with their gear as though we weren’t there at all. Minders looked at their watches anxiously — there was obviously a really important meeting somewhere else that he should be at. A few words, a quick handshake, and off went the PM and the entourage. Once again, a common feeling of disbelief.

The last was a fascinating illustration of what I had been told about our PM, the fabulous Kevin 07, from those who had to work to him. I was glad that I wasn’t one of them. To read Paul Kelly’s book was to be reminded of the sheer awfulness of some of those years.

There is much more to his book than just the internal warfare of the Labor Party during those two parliaments, and Kelly offers some really sobering suggestions about the way our polity — our collective life as citizens — is developing. I will turn to that in my next essay. The siege in Sydney, and the worse tragedies in Paris, make his book even more thought-provoking. What is happening to Western democracies?