Albedo, and its role in ‘climate change’

The word ‘albedo’, like the word ‘albino’, comes from the Latin word for white — albus. Actually, we get ‘albino’ directly from the Portugese, who used it to refer to what they saw as ‘white’ African negroes, whose skin lacked the black pigment. In astronomy, albedo refers to the amount of sunlight that is reflected from an object. It is commonly expressed as a number from 0.0 to 1.0 that measures the fraction of solar radiation that is reflected from the object’s surface. Earth has an albedo of 0.29, which means that about 29 per cent of the sunlight is reflected from its surface.

That 29 per cent is an average, of course. The North and South poles do much of the reflecting, while the tropics absorb the most. You can see that in the accompanying diagram. 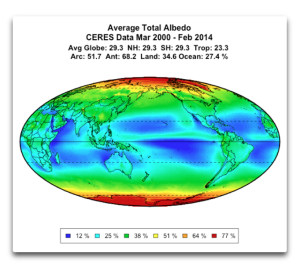 The Antarctic reflects more two thirds of the sunlight that approaches it, while the tropics reflect less than a quarter.

I owe much this knowledge to an intriguing essay by Willis Eschenbach on WUWT. Eschenbach has claims to be one of climate science’s chief ‘citizen scientists’, because he writes such a lot, his work is always accessible, at least in part (his mathematics are far more advanced than mine), and it is relevant.

What is it relevant to, in this case? Ah, Mr Eschenbach is interested in an old question. Can the seas actually boil? Somewhere he has written, and I have referred to it, his contention that there is a highest temperature in the oceans, and it is about 30 degrees C. Why is that important? Well, one of the dooms awaiting us, from the AGW scaremongers, is that the seas will not only rise up in height, but rise up in temperature as well, killing all sea life, and in turn us as seafood-eaters.

There seems no evidence of such an event in the past, and Eschenbach argues that there must be some kind of thermostat or governor in the ocean-atmosphere system that prevents the seas just getting hotter and hotter. And in the WUWT article that I have mentioned he uses some fancy mathematics to argue that there is such a governor: as the tropical seas warm up, it seems that beyond a certain temperature (about 26 degrees C) the outcome is increased albedo. In short, as things get hotter, so the system acts to cool it down.

This contention caught the interest of a systems engineer, Dave Burton, who wrote as follows (a bit of editing only):

With my background in Systems Science, I see feedback mechanisms everywhere. One develops a nose for them, and, in the natural world, as in engineering, most of them seem to be negative (stabilizing) mechanisms, which attenuate forcings.

You seem to have identified a non-obvious but doubtless very important negative (stabilizing) feedback mechanism, Willis.

There are many other negative feedback mechanisms at work, too. Some of them are obvious, others less so.

1. Most basically, of course, the warmer things get, the faster they lose heat. But, also:

2. As temperatures go up, evaporation at the surface increases. That removes “heat of evaporation” from the surface. Moist air is lighter than dry air (contrary to intuition), so the moist air rises until the moisture condenses into water droplets or ice flecks, as clouds, releasing the latent heat which was absorbed at the surface. Thus the water cycle is a classic phase-change refrigeration cycle, removing heat from the surface, and releasing it aloft, just as the Freon phase-change refrigeration cycle cools your refrigerator.

Anything which increases surface evaporation (such as warmer water, or reduced ice cover) increases water-cycle cooling.

Because increase surface temperatures make the cycle run faster, it is a negative feedback mechanism, cooling the surface faster, as temperatures go up.

3. As levels of The Precious Air Fertilizer (CO2) levels go up, so do plant growth rates. That removes more CO2 from the air, attenuating the increase in CO2 — another negative feedback mechanism.

Note: that snow accumulation is a big deal. The magnitude of ice accretion from snowfall on ice sheets was illustrated by the team which salvaged Glacier Girl from under 268 feet(!!) of accumulated ice, 50 years after she landed on the Greenland ice sheet.

But the negative feedback mechanism you’ve identified, Willis, is new to me. Very excellent work!

And the last reference caught my attention, because I too wrote about Glacier Girl (here). It still shocks me that no one who writes anxiously about the melting of the Greenland ice-cap has bothered to ponder over the fact that in fifty years the Greenland ice cap, or at last a part of it, added more than 85 metres of ice through snowfalls.

Dave Burton’s comment really is thought-provoking. I too am conscious of negative feedbacks, but I can’t prove them. What we do, really, is to say that if there are  positive feedbacks, and they are a threat, then there ought to have been some kind of incident or event in the prehistoric past that we can point to as an illustration of what might happen today. To the best of my knowledge, there isn’t one. Again, it seems that systems that attain an equilibrium of some kind contain forces that tend, other things being equal, to return the system to equilibrium if there is a disturbance to it.

It doesn’t mean that there aren’t positive feedbacks. But with respect to climate, there don’t seem to have been positive feedbacks that last for very long. And if there are demurs from the orthodox, it would be useful to be provided with examples.