What will the world be like in 20 years’ time?

I am somewhat sceptical of attempts to tell us what things will be like in the distant future, but it needs to be recognised that those who have to plan for the future do require some sense of what things could be like. Without it, they can’t plan at all. Defence planning, the building of nuclear power stations, or indeed of any large power station, water supply dams, transport infrastructure — these issues can’t be dealt with unless you can put forward a persuasive context for the time when the thing will be needed, and is finished/bought/complete.

I say all this because BP has brought out its Energy Outlook 2035. It begins with a big disclaimer, to the effect, simply stated, that this is really an educated guess, and that no one should blame BP if the decisions made on the basis of the report all go belly up. CSIRO says that same about its climate reports, too.

The Report is not quite 100 pages long, is full of data, assumptions and estimates, and does consider alternative views of what might happen. I think its most important conclusion is that in terms of the sources of energy likely to be used around the world, nothing will be very different in 2035. This is a summary graph, not from the report itself, but one crafted from it by The Guardian newspaper (Billion toe = billion tonnes equivalent). The little blip you can see in it is the consequence of the GFC. 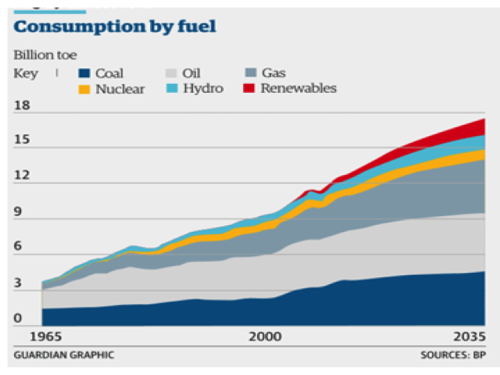 This is the whole world, not the USA. In 2035 coal and oil are joined by gas, as the three main sources of energy of all kinds. Nuclear energy is not estimated to be much bigger as a source then than it is now, and is smaller in 2035 than hydro or renewables, which are projected to grow a little in consequence over the next twenty years. The Report says that Fossil fuels in aggregate lose share but remain the dominant form of energy in 2035 with a share of 81%, down from 86% in 2013.

The BP document does not enable us to see what happens, or is thought to be going to happen, in Australia. My guess is that since we have abundant coal, and small supplies of oil, while developing gas and shale oil anywhere near settlements seems beset by political problems, coal will remain our biggest source.

Back to fossil fuels. If they are going to be almost as important in 2035 as they are now, what does that tell us about greenhouse gas emissions? Bob Dudley, the BP Group chief executive who appears responsible for the report, put this paragraph into his Introduction.

That brings us to the environmental challenge. The most likely path for carbon emissions, despite current government policies and intentions, does not appear sustainable. The projections highlight the scale of the challenge facing policy makers at this year’s UN-led discussions in Paris. No single change or policy is likely to be sufficient on its own. And identifying in advance which changes are likely to be most effective is fraught with difficulty. This underpins the importance of policy-makers taking steps that lead to a global price for carbon, which provides the right incentives for everyone to play their part.

What does he mean ‘does not appear sustainable’? The Report says that, on all the best evidence, this is what is going to happen. Renewables, which everyone of the Green  persuasion points to as the saviour of the planet, will have got up to about 6-7 per cent of the whole. We know that solar requires massive storage to be of any real use to electricity grids, and is of no use yet in transportation. Wind is a costly indulgence and of no use whatever to the grid. What is he offering as a way forward? Nothing very much. It’s all up to the policymakers.

What if, magically, the UN agreed in Paris at the end of this year, we all followed suit, and there was a global price for carbon? What would happen then? Surely what would happen is that everyone in the Western world and in the rapidly developing world would suffer a quick and developing decline in their living standards, while those in the really poor countries would have to stay where they were— very poor indeed, and without cheap and useful energy.
We know that even if we stopped all industry tomorrow the reduction in temperature would hardly be noticed by anyone. And what is the ‘environmental challenge’, the enormous danger that we would be attempting to thwart through all this? An increase in global temperature that has not occurred in any significant way over the past decade and a half, and since it last occurred, in the latter decade or so of the 20th century, there has been a perceptible greening of arid areas and a marked increase in food production.
I am led to the conclusion that Mr Dudley put this paragraph into the Report because he thought he ought to, to avoid criticism from the Greens and their supporters, not because it would be helpful in any way, as it certainly isn’t. Michael Kelly FRS, a Cambridge professor of nanoscale science who is also a noted British ‘climate change’ sceptic, has written a scathing piece on the fatuity of this whole dodgy  issue. He says, in part, climate change mitigation by suppressing carbon dioxide emissions is a busted flush that history will look back on with great ridicule, even if the worst of the climate alarmist predictions come to pass.
And he offers an interesting analogy, which I wish I’d thought of:
The more I think of it, the project to decarbonise the world economy is a modern version of the biblical Tower of Babel in engineering project terms. Until we get a much clearer idea of what we will get for our money, whether it is $10T or $100T spent on carbon emission mitigation in terms of measurably improved climate in the future, just who would invest their pension money there! If we don’t know the end point, and the cost to get there, the Tower of Babel is the correct analogy. $10T spend on the poor would give the bottom billion an income of $1000pa for a decade…
What is so frustrating about this business is the way in which actions like that of Mr Dudley, in covering BP’s backside against criticisms that all it is interested in is making money, is that the ordinary reader, if he or she chances on in the Report, might conclude, ‘Wow! Even BP says we have to do something.’ Yet the conclusion from the Report is obvious: if all its estimates and assumptions are correct, the world is going to go on using fossil fuels at much the same rate for the next twenty years.
And there’s no real indication that the planet is suffering, or that humanity is, either. On the contrary, more and more people are emerging from poverty, according to this graph — the first time I have had two graphs in the one essay! 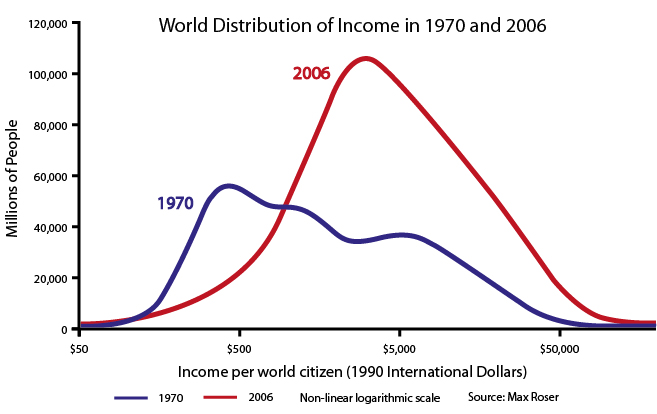