What is government really for?

Nearly sixty years have passed since I became interested in what a good society is, and how it might best be organised. I am still struggling with that question. It’s not unlike another deep and meaningful question, which is what we human beings are for — or more personally, what I am for. Why am I here? My university studies took me from history to political science, in a gentle ascent, and it seemed that ‘government’ was the core element of my new discipline. But what was government for? What was its indispensable function?

John Locke argued that government was there to safeguard the rights and liberties of citizens who are ultimately the best judges of their own interests, and I start with that. But as a behavioural social scientist I also looked at what people actually do, and I came up with a rather wider picture of society, and then tried to set government inside that picture. Before I go further, I noticed, both in her end-of-office eulogy and in her later book, that Julia Gillard put great store on the fact that her Government had passed a lot of legislation — and that showed how effective she was as PM, and how effective her Government was in general, despite being in a minority.

There is something in that, certainly, but one’s evaluation of it has to be tempered by an examination of the real need and the real effectiveness of the legislation that was passed. How much of it was necessary, and in whose judgment? The Institute for Public Affairs some time ago published an interesting graph of the number of pages of legislation that have been passed over  the past fifty years. You can see it here. 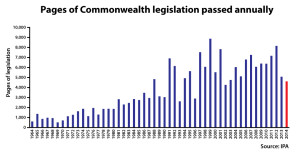 The year 1964 was the last full year of the Menzies Prime Ministership. It looks as though nothing was done, at least in legislative terms. There’s a bit of an increase in the Whitlam and Fraser periods, and another jump in the Hawke and Keating periods. Suddenly, in the Howard years, we run up to 8,000 and 9,000 pages of legislation in a single year. Even Julia Gillard was not quite given to such legislative frenzy. Mr Abbott’s first full year in office shows a sharp decline, to around 5,000 pages.

Why is it, I ask, that our Federal Parliament seems wedded to legislation, whereas fifty years ago it seemed wedded to administration? One answer is that we keep asking it to do things, another is that people see government and laws as a way of controlling the behaviour of others, and a third  is that the more legislation there is, the more amendment is necessary when something new is introduced. Every now and then a new Government comes in and sets about getting rid of old legislation that has passed its use-by date; the Abbott Government had a go at doing this last year.

That’s a good thing to do, but the real weight is the pressure to expand the reach of government. The death of a teenager sliding down the banisters in the QVB in Sydney produced a raft of calls for new laws (NSW ones on this occasion) to stop this sort of thing happening again. Alas, laws and occupational and health measure won’t stop people doing impulsive things. And it would be worth someone’s while looking at the real effectiveness of the OH&S laws that have been passed in the last thirty years. What measurable good have they been? Do we know?

Back to John Locke. It seems to me that our society is best seen as an interlocked set of relationships formed through breeding (once I would have said ‘marriage’). Families are not especially interested in politics. They are preoccupied with the ordinary business of existence — gaining food and shelter, rearing children, enjoying life. Families are the basis of all societies, and families do most of the heavy lifting for the society, to use Mr Hockey’s phrase about the incidence of income taxation. It is when families can’t do the work that we look around for somebody to help. In  past generations charities, churches and the wealthy, through benevolence, were the only sources of help. The welfare state as we know it is quite a recent invention.

Family links come into being when we produce children, in two ways: we start a new family, and by doing so we link existing families — our parents become our children’s grandparents. We create not just children but cousins, and nephews and nieces. In time we belong to large extended families, and through them we are linked to their friends as well. Yes, we are all still individuals, and we have friends who are not part of our families, but it is one’s family, rather than one’s friends, where the mutual support and emotional sustenance lie, for the great majority, I should think..

Where does government fit in? Plainly, where there is family breakdown, or family absence. Homeless people, people who are impaired so seriously that they cannot survive without daily help, orphaned infants, the dreadfully ill — they all need support, and our society now is so technologically advanced that government is the obvious source of that support. But to me it should be the source of last resort, not the immediate helper.

One of my own brood, in discussing issues like these, said that it is helpful to think of ‘government’ as a company. What is its product, or service? All citizens vote for the Board of Directors (more accurately, they vote for the people who will choose the Board of Directors), and all have shares, in that they are citizens and pay taxation in one form or another. Government is there, from this perspective, to run things that need to be monopolies — like taxation, or defence, or police, or law-making, or diplomacy on behalf of the nation-state.

I rather like that, which is why I have included it here. You might argue that government is there to provide infrastructure. But that doesn’t have to be a monopoly. Ports, airports, railways, motorways, schools, hospitals and universities all offer examples of private as well as public provision. Is there something that must of its nature be a monopoly? If there is, then it is the proper task for government. If the something is not a natural monopoly, then why don’t we let the market produce alternative possibilities?

What about market failure? you cry. Well, strictly speaking market failure is a state where all resources are not allocated efficiently, meaning  that someone could be better off without anyone else being worse off. There is also ‘government failure’, which can occur when governments try to overcome a market failure, but produce another and perhaps worse failure. My own view is that there will never be a state of perfect efficiency in human societies, and my preference is not to assume that governments will always do things best.

But I’m about to read a book by a friend, whose subtitle is ‘Can We afford Small Government? Perhaps I’ll find reasons there to change my mind.