What if all the ACT’s electricity actually came from wind?

I mentioned last time that the ACT Government is proposing that ACT electricity will be fossil-free by 2025, This is an ambitious claim and, in practical terms, impossible of realisation, since the various forms of electricity generation are fed into the grid as they are produced and we, the users, get a mixture of generation types when we turn on a light. On average, in 2014, the source of our power everywhere in Australia looked like this: 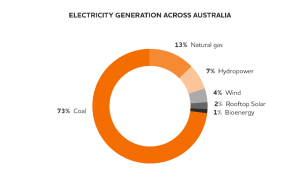 When commentators talk about renewable energy they often glide over the fact that a small proportion of our power comes from hydro-electric generators, or suggest that since coal makes up 73 per cent of generation, then the rest must be renewable. If only. Natural gas is 13 per cent. If you add that to coal, the fossil fuel contribution is 86 per cent. If you add hydro to that you get 93 per cent, leaving just 7 percent for the fancy renewables, and I’m not sure that bioenergy, strictly speaking, is renewable.

I’ve written about this subject on a number of occasions, and see the quest to somehow ‘escape’ from reliance on fossil fuels for electricity generation as delusory. A climate discussion group of which I am a member has played around with what would be required if the ACT really did ‘escape’, and the ACT Government’s announcement was something more than smoke and mirrors. Since the Government talked about getting what it wanted through buying wind-power generation in South Australia, one member decided to work out, entirely gratis, what the Government would need to do to have all ACT electricity coming from wind.  What follows is his argument, slightly edited by me. A piece of explanation in advance: Western Australia is not part of the eastern Australian grid, which is spatially the largest in the world. TW= terawatt hours = a billion kilowatt hours. One kilowatt hour registers the use of a thousand-watt electric radiator for one hour.

Each year 200 TW hours is consumed on the eastern grid. Now Australia’s population is not quite 24 million but since  large numbers of people live away from the grid, such as in Western Australia and the bush, for convenience I’m going to say 20 million. If I divide that into the total usage I get 10 MWh for each person per annum. Canberra’s population is about 390,000 so we need 3,900,000 MWh per annum for the whole city. That is 3900 GW hours. So how can we figure the size of the power station? Pretty easily, really: we just need to know what that is per hour, so we need to divide by the number of hours in the year. The answer is 445 MW, which is around four times bigger than any existing wind farm. Now that is the ‘plate capacity’, so to get anywhere near what is required an estimate of the ‘usable capacity’ is needed. To be generous, let us say that on average you will get about 25% of the plate capacity, so in fact we need a power station of 1.8 GW. In terms of wind turbines that means we need about 890 wind turbines at $4 million each, which means $3.6 billion. This will occupy a bit over 800 km² somewhere in South Australia.

Then, as an afterthought, he remembered that you would lose about 10 per cent of the energy getting it to the ACT, so we need to add 10 per cent to the figures above. And then you need to add intermittency — turbines slow down, go faster or stop, and the generating system has to be able to accommodate such fluctuations. It does so usually by turning on or off gas-powered generators. As one increases the numbers of wind-turbines coming on stream so one has to increase the capacity of the system to deal with intermittency. The paradox is that if one were actually able to have all the power coming from turbines one would also need to have the whole system backed up by gas generators. Why would we be doing this in the first place?

I wasn’t sure about his estimate of the amount of land needed to accommodate a wind-farm, and went off to read about it. Those in favour of wind turbines (and that’s most of the sites you can go to) say that once the turbine is erected then very little land is ‘used’ — cattle and sheep can graze as before. You’ll get figures there suggesting that 20 wind turbines could be placed in one square kilometre, which is much less than than that suggested in the extract above. Fortunately someone else came to the party, in the form of a US government laboratory report, which gives several examples of actual wind-power land-use in Wyoming, Illinois and elsewhere in the USA. The authors say, up-front, There is no uniform definition of the perimeter or boundary surrounding a wind power plant – in fact, the total area of a wind power plant could have a number of definitions.

But they do supply a number of examples of large wind-farms, the way they are set out, and the amount of land used by them. They define layouts as ‘single-string’, ‘multiple-string’, ‘parallel string’ and ‘cluster configuration’.On the face of it, the ‘parallel string’ layout uses the least land, but they all need a lot of land, on average 100 square kilometres for each hundred wind-turbines. Now the imagined ACT wind-farm in South Australia would be about nine times larger, and would need therefore about 900 square kilometres of land. That’s a square 30 kilometres by 30 kilometres, an awful lot of land.

And the turbines need to be sited where they will have the maximum exposure to wind (which is why they can’t all be grouped together closely). All in all, it is likely that there would have to be a number of wind-farms to make up the desired ACT electricity generation by wind, and that would seem to increase, not reduce, the amount of land needed for their construction. And we haven’t factored in, as we should, the size and cost of the back-up needed; fortunately the cost of gas-turbine generation is about two-thirds of wind, on a levelised basis (that is, taking into account capital, construction, operation, fuel and maintenance). But unless there is reserve capacity in the system (and why should the ACT be able to use it?), you need to add in a few more hundred million for back-up.

All in all, it’s just a nonsense, and what the ACT Government is saying, and doing, is completely disingenuous. And for the money involved, we could probably get small nuclear power reactors for half the price. They could be placed in the Australian Capital Territory, as well, behind a hill and out of sight. There’d be no power lost in transmission, either. It’s a thought, but I doubt that the ACT Government has ever considered it.