Here in the national capital we are getting a daily diet of Australian electoral politics, with an occasional foretaste of the ACT election race we will have in October. At the same time, across the Pacific Americans are watching the build-up to national conventions that will select the presidential candidates for the two parties in the November elections there. Actually it is already clear who they will be, Hillary Clinton (Dem.) and Donald Trump (Rep.), because each has built up such a lead in the primaries that no one else can supplant them. Indeed, Trump is now the only Republican candidate, since the others have pulled out. The likely outcome of the actual election is unclear, though the demographics seem to favour the Democrats. Much depends on whether Donald Trump can actually get the voters who like him to turn up and vote on polling day.

Much has been said already about the Trump phenomenon. He was given no chance at all of getting the Republican nomination when campaigning began, and he is completely outside the ordinary cursus honorum — the traditional path through which American presidential hopefuls come, a local political base of some kind, then election to either the State or the national legislature, perhaps serving as governor of the state, then the call to the White House. Trump is a political never-has-been, a businessman who inherited money and made much more of it, and likes to thumb his nose at the Republican party machine. He shrugged away suggestions that he would be dependent on rich supporters by saying that he was rich enough to pay for his campaign by himself. In Australia, you couldn’t say that and get away with it. In the USA it drew cheers. It is still to be seen whether or not the anti-Trump Republican leadership will try to frustrate his race by putting up, as an Independent, someone well-known who would siphon off some of his notionally Republican support.

What has given him the rise and rise that we have witnessed is the resurgence of a strong political tradition in the USA — populism. It is not simply an American phenomenon, though it has been strong there from the beginning. It refers to a political movement that claims to speak for the people (Latin: populus) against elites of some kind, the wealthy, the military, racial superiors, the well-educated, or whoever the apparent enemy is. Julius Caesar was a populist. So was President Andrew Jackson in the 1820s, and William Jennings Bryan in the USA of 1896, who failed win a presidential election. So, in their separate ways, are both Bernie Sanders, the Democrat aspirant trailing Hillary Clinton, and Donald Trump. There was a good deal of populist support for Barack Obama in 2008, too.

In the present context there is a widespread perception, accurate to a degree, that middle America (the skilled working class and the middle class) has lost its way, its place in society and its standard of living over the last decade or so, but especially since the GFC. A dispassionate observer might put that down to the rise of China as a maker of things at prices much cheaper than those of American factories, and to the GFC itself. No matter: from within the USA it is not hard to see that the banks did survive where the automakers on the whole did not. Detroit has suffered an appalling decline as a city, and there are smaller examples wherever factories were the important engine for local prosperity.

Trump and Sanders both point to this change. Sanders sees it as a clear instance of capitalism and its failures at work. Trump sees it as the fault of anyone who takes his fancy, but China, the Harvard elites and the media are frequently cited as villains. And both Sanders and Trump have an audience, though Trump’s is much larger. Trump’s actual policies are not outlandish, though the TV clips that we see suggest strongly that he is. It is being argued that there is a populist strain emerging around the world, and that there is one in Australia too. The milder version is that we have all become disenchanted with the political class.

We have had one Trump-like figure, in Clive Palmer MP. He was not and is not nearly as outlandish or as interesting a figure as Donald Trump, but he did show what you can do in politics, in a limited way, if you have lots of money. And he possesses the same indifference to what the media think about him. He could not have done that without a widespread disenchantment with what passes for political debate in our country, and the present election campaign only emphasises how empty that debate is. I have used the football team analogy before. Our parties are like professional football teams: they attract the same highly skilled would-be politicos; it doesn’t matter much where they were born or grew up, and the local party faithful often have little say in choosing them, which means that they are not ‘representative’ of the electorate as would once have been the case; they have often served in the private office of a Minister MP or Senator (or the Opposite numbers); they say much the same things, and say they stand for much the same things. For many people, it doesn’t really matter which team is in power: they are both objectionable.

In the meantime we have problems, and no one seems to be addressing them. No matter what the passionate say, we cannot afford both the Gonski funding and the NDIS funding, and arguably we cannot afford either of these long-term and expensive programs, and certainly not at the originally forecast patterns of funding. No one wants to talk about that. We have a large younger generation of voters that has never known anything like a real absence of money either within the family or the nation. The notion of ‘cuts’ to public spending is seen by it as almost obscene. We are a wealthy country they say, which is true, and we should be able to afford whatever it is. But even wealthy countries cannot do everything they want to do. The failure of our current debate to address this issue means that there is no obvious choice on July 3rd.

The major populist strain in our politics was appropriated a long time ago by Labor, which saw itself as the guardian of the workers, who were the ‘people’. The USA has no counterpart to the ALP at all. In the 1960s six Australian workers in ten were in unions. Now the proportion is less than one in five. Job security has gone, not because of greedy capitalists, managers or vice-chancellors, but because the context of employment is changing rapidly. University students don’t buy books any more. Machines are replacing workers in factories, secretaries and typists have gone, middle managers are being made obsolete, even the workplace is changing its location. All this unsettles people; they want answers, and they don’t like the ones they are being given.

From the right of politics we have a new populist strain, bits of which many workers can fasten on to easily. We don’t need all those refugees, we don’t need to be told what to do all the time by the nanny state, we want things the way they once were, there are too many handouts to the undeserving, we need more control over our own lives, and so on. Every now and then I see this as the new ‘middle ground’ in Australian politics, and I don’t much like it. What is more, I don’t see the battle for the middle ground providing any clues as to how to solve our real problems.

It was all so much simpler when it was we, the goodies, versus the USSR, the baddies…

For some sad light relief: John Spooner, the able cartoonist from The Age, and one of the few to poke any sort of fun at climate orthodoxy, seems to have been retrenched. I recognise that the major newspapers are having a lot of trouble, but it is  great pity to see John Spooner go. Here is his last work of Age art. 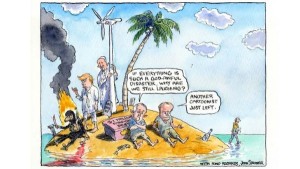