The ABC announced the other day that the ACT Government was considering a total ban on single-use plastics, like plastic bags, knives, forks and other picnic and fast-food essentials. The relevant Minister said that the Government thought a ban was a good idea, but the community ought to be involved, so there would need to be a discussion paper. We in Canberra have a lot of discussion papers. What effect they have on public policy is rarely clear.

Before I could gather my own voice, I heard my wife say, loudly, ‘What a silly idea!’ and I agreed. It is a stupendously silly idea; in defence, it may be part of the ‘keeping-the-Greens-onside’ position of the otherwise Labor ACT Government. Very few in their right mind would see this ban as something the Territory needs right now, or in any likely future. We don’t seem to have a plastic-knives crisis. The Minister himself said that plastic bags make up less than one per cent of the rubbish in ACT landfills, but it was only the tip of the problem (his play on words, not mine). What exactly is the problem below the tip? He did not enlighten us.

It happens that South Australia is proposing such a discussion paper in January, while the EU said something similar last year: a ban on anything plastic for which there was a readily available alternative. Perhaps the ACT Government wants to be in the van with its ban, and provide a lead to the rest of the nation, SA excepted. Our Minister also said a cotton bag equivalent would require 7,000 uses to break even with its little plastic brother, which suggests that he is unsure about the real point of the ban. Altogether this is a solution looking for a problem. If ACT Labor and its Green supporters want to make a difference about plastic bags, they should help the countries in Asia where plastic detritus really does clog up streams.

Here, for those who like images, are two waterways, the first in Bangladesh, the second in Cambodia. Try as you might, you’ll find nothing like that in the ACT nor, I should imagine, anywhere else in Australia. Ours is a comparatively clean, ordered and tidy nation. 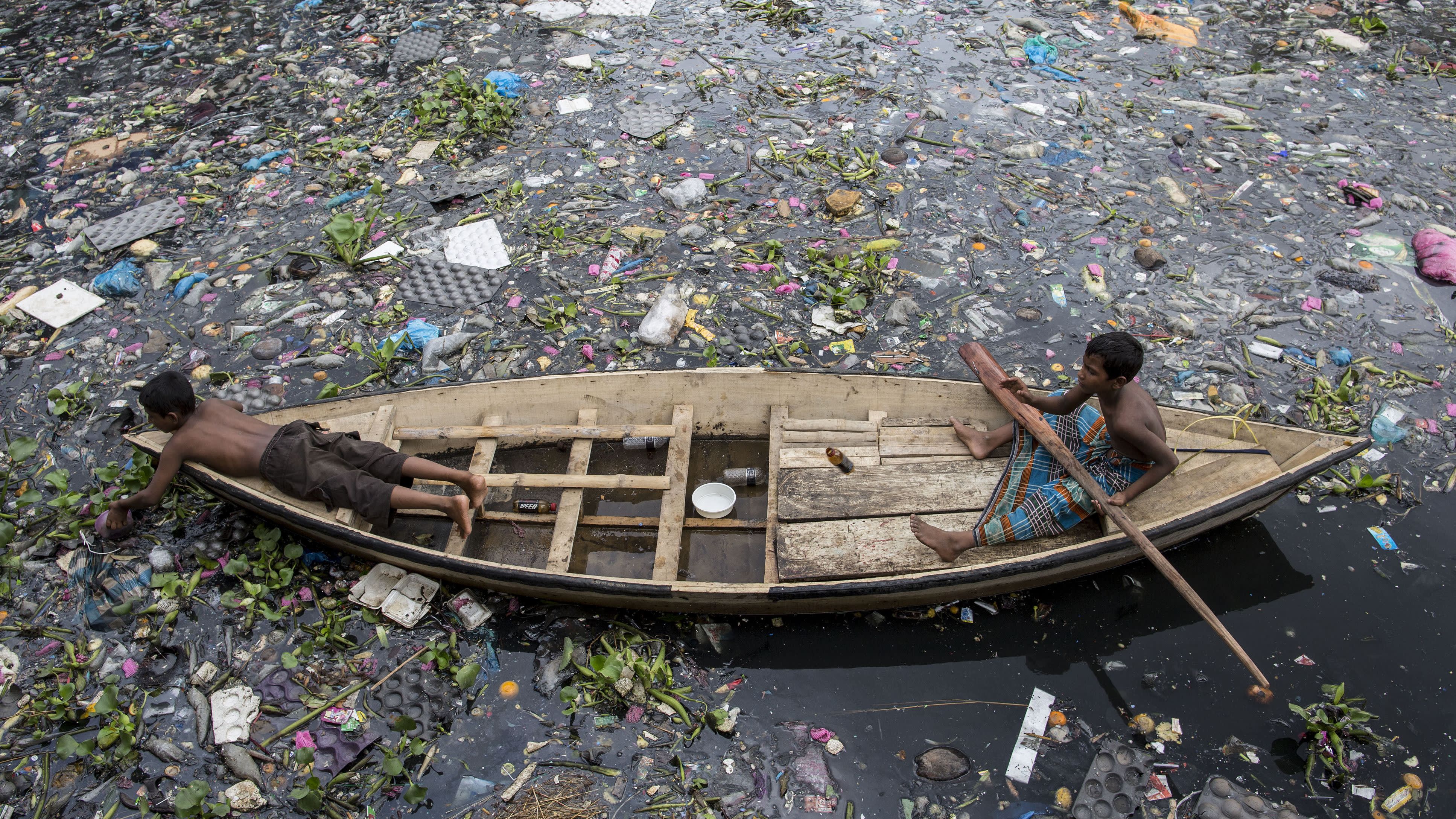 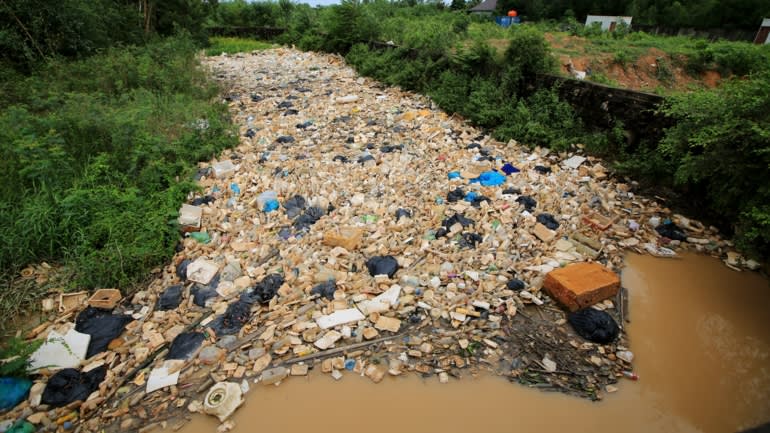 Where does this banning push come from? I have no evidence, and what follows is simply my speculation. First, there is an environmental movement whose members see things like plastic as human-made, disposable, not sustainable, and just bad. Some of them won’t wear leather, some won’t eat meat, some won’t drive cars, and so on. They think the rest of us ought to be like them. How the world would actually work if what they wanted were to occur does not seem to have occupied them. Some think there are too many humans, as well, though one assumes that stricture does not apply to themselves.

There is a religious element in all this, and it comes, I think, from the steady decline in church attendance since the end of the second world war. I’ve written about this in the past. Women made up the majority of church attenders in the past, and still do. But the absorption of women into the contemporary workforce has reduced the numbers available for church support and church attendance. Our culture has a strong element of ‘doing good’ in it, and going to church was once part of this culture. It probably still is, for those who attend.

How much one feels that way is probably unique to the individual. My own spiritual, ‘doing good’ sentiment is satisfied by good music, good literature and good art, which make me feel how creative and beneficial humans can be. And I support financially a few entities that I think carry on that work. I can see that others feel the need to do more themselves. There are scads of community groups with worthy aims, and membership and activity in these groups make people feel that they are doing good things.

At a more elevated level there are those who want to ‘save the planet’. They help to do this both by running their lives so that they feel that they have helped in the saving, and of course through hectoring other people and governments to follow what they believe is the necessary planet-saving therapy. That they rarely understand the science that is thought to underpin the therapies is of little concern. They believe ‘the science’, or what ‘scientists’ say. That there are plenty of scientists, almost certainly the majority, who don’t think the planet is in great danger, or in need of some of the extreme therapies, also doesn’t concern them. They are in the world of belief, not the world of science, where data always trumps belief.

Another element in the increasing desire to ban things and people, I think, is the much greater wealth of our community, which allows people to belong to organisations, help them financially, attend meetings, and the rest. Plus the greater education that members of our present society have in comparison with past generations, which seems to lead to a widespread sense that one’s own opinions are as good as, and probably superior to, the opinions of others around one. And the ubiquitous social media of our time, which allows, indeed encourages, rapid communication between sympathisers. Organisations like GetUp can decide to push for a ban on this or that, and generate what appears to be a great deal of public support. If they have media-savvy members, they can attract the attention of TV and radio news, which gives them even more apparent influence.

Sixty or so years ago, the then Coalition Government wanted to ban the Communist Party. A necessary referendum in 1951 did not give it the power to do so, and that desire to ban faded away slowly. Banning seems to have thrived as a public policy goal in the last decade or so. From time to time I wonder if the root cause is simply the desire of parliamentarians to be seen to be doing something. Our collective parliaments do seem to be generating more and more laws, and lots of them are about bans of one kind or another. You might think that as our society gets wealthier and better educated the felt need for more laws should dissipate. We ought to be able to get rid of some laws. But no. It seems that we are adding thousands of new laws every year. I’m not sure of the need; in fact, I don’t think I know of the purpose of the laws, only of their number, which the IPA, no friend to new laws, provides every year. The Commonwealth, six States and two Territories together generate a lot of new law. Yes, a lot of it is amendment to existing laws.

The ACT is actually pretty good at keeping things tidy, partly because Canberra is a well-planned and beautiful city. Yes, we have landfills, and there is a cry to so arrange human life that we have no need of them. But we don’t have any kind of crisis there. There is super-abundant land that could be used for a new landfill, and after thirty or forty years we could cover it with soil and trees and construct yet another one. Plastic knives and forks serve us well, and my advice to the ACT Government, not that my advice has been sought, is to find something more sensible to do with its time, energy and money. It could ban bans, for example.