The tragedy of the search for the perfect body

This website is just short of being three years old, and today is the first time I have built my essay around a video. I saw it on the Facebook page of one of my nieces, and I was much affected by it. I can’t actually provide it for you on my website because of what WordPress says are ‘security reasons’, but you can see it here. It is only five minutes long. The author is Taryn Brumfitt, a young mother from Adelaide. She had always hated her body, she explained, and one day she decided to do something about it, by entering a body-building competition. She trained, changed her diet, worked hard, and got to a stage presentation where she was applauded. Dressed in a bikini, she looked stunning to me, not an ounce of fat, long legs, slim body, the works.

But, Taryn said, she still hated her body. So she tried to find out what all that was about, asking a hundred women to provide just one word that described how they felt about their bodies. The video doesn’t present all of the words, but a selection of a dozen or so, from perfectly pleasant-looking women, are all negative, the last three terms being the repetition of the word ‘disgusting’. Normally before and after photos follow the same formula: left is a sad and overweight person. On the right is a happy, satisfied, and self aware figure — because she lost weight. Taryn reversed the usual  sequence on Facebook, showing herself first as the glamorous, leggy blonde, with ‘After’ being a much softer, plumper, post-pregnancy version of herself. According to Taryn, the photos went viral, with 3.6 million hits in the first 24  hours.

Her message is simple: It is really terrifying how often women descend into self hate because they don’t conform to the societal idea of a “perfect body.” Women should love your own body, because it’s the only one that you have. Speaking as a husband, father and grandfather, I say Amen to all that. And as a social scientist, I can’t help wondering where that self-hate comes from. A couple of the women Ms Brumfitt talked to said that their bodies weren’t ‘perfect’. Who told them that perfection was the ideal? And what would be perfection anyway. Cultural norms about desirable attributes aren’t fixed for all time. One of Rubens’s most celebrated paintings is ‘The Three Graces’ (1639). Here they are. They are plainly intended to be beauties, but modern beach-girls they are not. I bet Rubens’s models didn’t think they were ‘disgusting’.

In the 1920s fashion dictated a flattened bust and no hips or waist. My mother, born in 1906, appeared in the gear of that time in a number of photos in our family album. She is also pictured in the swimming costumes of that time, and they do nothing for anyone’s figure. One inference you can draw is that revealing clothing and accentuated figures weren’t part of ‘fashion’ then.

They are today, there can be no doubt. And that may be part of the problem. Which females look excellent in the brief swimming costumes of today? Teenage girls, for the most part. But we are only teenagers for a short time. No matter, as long as I can remember women’s magazines have been providing information about how to lose weight, as though losing weight were the most important part of one’s daily life. What is worse, a glance at the brief snapshots of models on catwalks shows far too many of them to be thin to the point of anorexia. Who has dictated that fragile, bony anorexics offer the perfect body — for showing off clothes, at least?

The Duchess of Windsor is reputed to said that ‘A woman can never be too thin or too rich’. Surely she was wrong on both counts. I do not blame women’s magazines, who do their best to cater to their readers’ desires and interests. There is certainly a lot in them about food and its preparation, but there is also a lot there about diets and how celebrities shed kilos. And about the royals and other celebrities, and about love, marriage and sex (and some of that is about how to have the right kind of toning for your body in the bedroom). The following image, which comes from Huffington Post (UK), says it all. 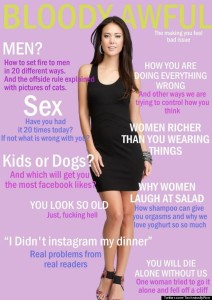 I don’t think there are any real villains in this story. We have moved away from concealing the body to revealing it, over the past century. That change, welcome in many ways, comes with its own costs, especially for people who know straight away that their body is not something that will arouse admiration in beholders. And that feeling, as Ms Brumfitt sets out well in her video, can be true even when the body is in fact quite similar to those you will see in celebrity magazines. We are always aware of, and magnify, our own imperfections. It is so easy to do, if the self-image is a critical one. At the end of her video Taryn showed a positive self-image. A plainly handicapped, overweight woman said (with difficulty, as she was speech impaired) that her body was ‘soft and luscious’. That moved me to tears.

I thought this whole scenario was really about women, and indeed the Brumfitt video says so explicitly. But one of my daughters-in-law, a Pilates instructor among other talents and skills, says that there are a lot of young men now for whom the perfect body is the ideal. They dislike their own, and work and search vainly for perfection, at real cost to their own self-confidence and well-being.

It is a funny world. For most of us, once we have finished growing, there is a standard rule. We have a ‘natural’ weight, and we can keep to it through ensuring that our food intake is matched by our energy expenditure. If we do, that’s the body we have, and we’d better think of it as OK, because, as Taryn says, it’s the only one we have. Plainly, that is really difficult.