The real puzzle about global warming

I know I’ve been banging on about global warming over the past two weeks, but that is because there has been a lot of interesting stuff about it which readers generally may not have seen. In this post I’ll puzzle away at some of the implications of what has appeared in AR5 of the IPCC about it. Let’s start with a graph. 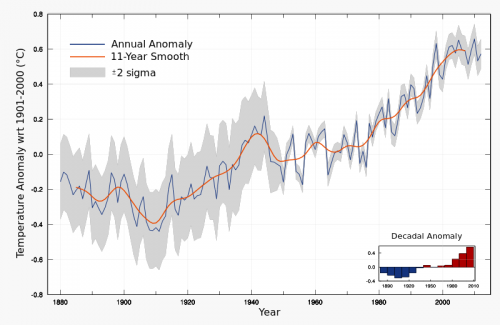 This comes from the National Oceanic and Atmospheric Administration of the USA (NOAA), and shows the movement of the global temperature anomaly over the 20th century. The grey shading shows the uncertainty the measurements to the level of two standard deviations, and you can see that uncertainty diminishes perceptibly after 1950. The blue line offers the average observation for each year, while the red line smoothes out the annual variations.

Those on the dissenting side in the ‘climate change’ issue have no complaint about the graph and its contents, even if some might suggest that the data in the 19th century are pretty sparse, especially for temperature in the oceans, and that the uncertainty then must be even larger. But let that pass. No one disputes that there was probably a longish period of declining temperature from 1880 to about 1910, then a longish period of warming until about 1945, then a levelling out until 1980, then another warming period until about 1998, then another levelling out until the present, which some think could continue for another twenty years or so. Depending on whom you read, and what temperature dataset is being talked about, the increase in temperature over the last century tends to be about 0.7 per cent, most of it since 1950.

If I were to put in the curve showing the increase in carbon dioxide you’d see a steadily increasing line from about 1958, when the Mauna Loa measurements began. Depending on whom you read and what dataset was being referred to you’d get an increase in global temperature for the 20th century of about 0.7 per cent.

The puzzle is the attribution of that increase. The orthodox position is that carbon dioxide begins to be the cause of the warming in the 1980 to 1998 period. This period, they say, is when the world really began to consume coal and oil in a big way, as countries became prosperous and built power stations and made cars, planes and all the other users of petroleum.

Well, dissenters used to ask, what about the earlier warming period from 1910 to 1945? Ah, came the orthodox reply, that was natural variation. Well, what about the level period  from 1945 to 1980 — when there was already a lot of power-station building and car production going on? Ah, production was much smaller then, and anyway aerosols must have masked some of the warming (soot particles in the air will prevent some of the sun’s rays reaching the surface).

There is very little evidence  one way or the other about aerosols, and indeed almost everything in this debate is about estimates of variables thought to be important. But the orthodox had the upper hand, if only because temperatures and carbon dioxide were indeed going up together between 1980 and 1998. Now a hiccup or two in annual variations can be expected (see the graph above), yet a fifteen-year levelling out doesn’t look like a hiccup — though it might be. (Note that the graph doesn’t extend past 2010.)

It was important for the orthodox, and especially for the IPCC, that warming resume its hand-in-hand progress with carbon dioxide. It has failed to do so, and that has caused the IPCC to mutter uneasily, wave hands and pretend that it’s not a problem. It has come up with some candidate explanations, about which I have written. Of course, these are unsatisfactory, at least as a reason for continuing to have carbon taxes, ETSs and all the regulations that go with them. The IPCC says now that natural variability may have played a part in the ‘hiatus’, and it is hard to disagree. But if it has done so between 1998 and 2013, where else might it have played a part?

Back to the graph. In my view the slowly ascending temperature lines contain the outcome of a mixture of ‘forcing’ by human activity and another ‘forcing’ that we call ‘natural variability’ because we don’t know where it comes from. It might have a number of causes, which amplify the human activity variable, or cancel it out. We don’t know.

The data are really rubbery, but it is possible that there was no net warming of any kind between 1880 and  1955, and that what has happened since is mostly natural variability. Because if you can admit natural variability in the present period, why can it not have been important earlier? After all, we know that humanity has experienced warm periods at other times — the Middle Ages and the Roman and Minoan equivalents. Natural variability must have been pretty powerful then, as well as during the Frost Fair times of the Little Ice Age.

Do we need carbon dioxide at all to explain warming? I am coming to the view that the human activity aspect of warming is there, but only in a minor way. New data of various kinds will help me make my mind up, though I see no reason to do so at the moment.

The truth is that we don’t know a lot about the climate’s ‘natural variability’, and we never did. Perhaps the ARC could ensure that an Australian proposal or two might be funded that seeks to find out more, even at the expense of how the nutless gnat is coping with projected  ‘climate change’. After that, it could fund some work in ‘climate sensitivity’, which seems as mysterious an entity now as it was when the IPCC began its task.