(1) I’ll start this one with a reference to a new paper and a flashback to one of my own essays. The IPCC developed a concept for its last report called ‘Representative Concentration Pathways’ (RCP), which are scenarios  about what might happen given certain assumptions about the control of carbon dioxide. The scariest of these is RCP 8.5, which is, not coincidentally, the most favoured pathway if you are an alarmist writer. I wrote about it here. RCP 8.5 is not, as often claimed, a ‘business as usual’ scenario, but a highly unlikely scenario requiring people like businessmen to behave irrationally.

Larry Kummer, whose website I subscribe to, has written a most interesting essay of his own based on a recent paper by William Nordhaus, in which Larry gets to the heart of the RCP 8.5 mess by showing how unlikely Nordhaus’s projections are. Most people don’t known what RCP 8.5 means, and the media never tell us how unlikely its story is. All we hear is that ‘the Greenland Ice Sheet is going to melt!’

However, you just have to chip away, as I am doing here.

(2) Judith Curry is asking those interested in the debate about climate change to help her with the slide that follows. It’s a bit cryptic for me, too. 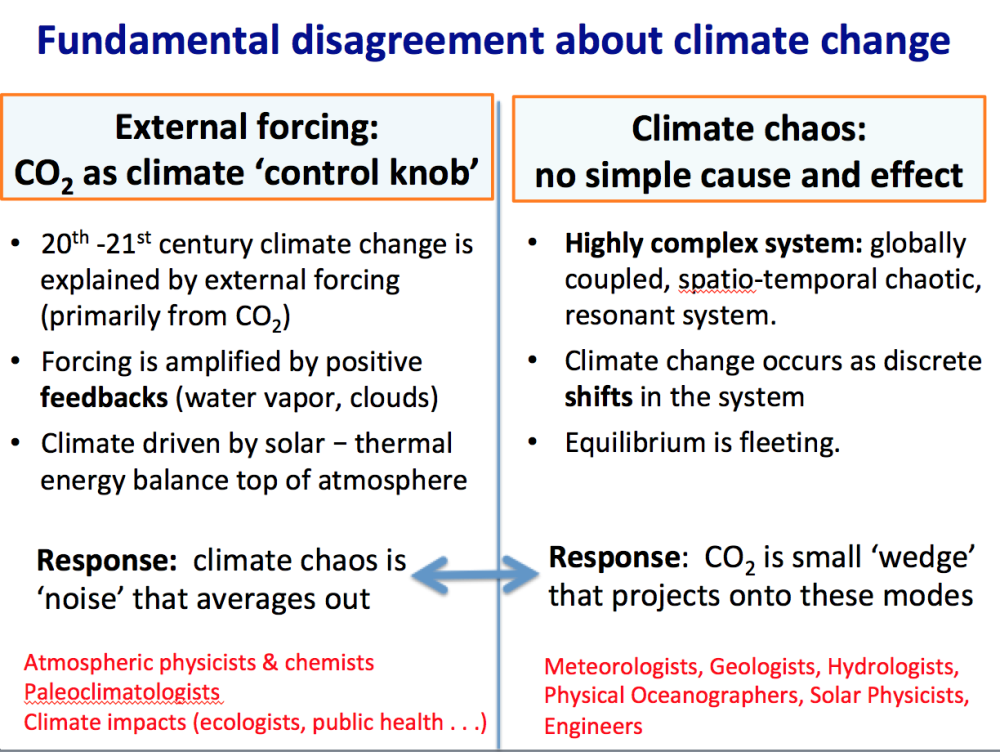 (3) I started this website six years in mid June. In the last June-to-May year it received 113,658 hits. There have been 873 posts and 20,627 comments in the six-year period, and somewhat fewer than 4,000 comments in the last year. If we take out a hit for every comment, then last year the website received about 110,000 hits. That’s 110,000 ‘readers’, about 10,000 a month, given that December and January are only part months for the website. About three quarters of the readers are in Australia, the rest across the globe.

I thank them all, and of course the commenters too. I must be close to a million words published on the website, which is about the same number that I published in newspapers over my working life. Doing the weekly essay is not a chore, but something I look forward to. I am never sure what the next one will be about, because there are always things happening that I feel the urge to comment about. Long may that urge continue!

(4) I have been attacked by wogs, bugs and fractures,  and I am unable to write an essay this week. It may be some time before I can return to this pleasant task properly, but  IU feel confident that the time will come. With every good wish,