The history of climate

Because history was my first intellectual love, and I read it for pleasure, the aspect of ‘climate change’ that interests me most is the history of climate. In terms of measurable matters, we are trapped between two stories: first, the very modern, the last century or a little more, when there were thermometers, and the distant past, where we use the techniques of palaeontology. But where thermometers can give us daily, even hourly, data to play with, palaeontology deals in years, and is better with even larger chunks of time.

The outcome is a lot of uncertainty, with one side saying that what is happening is unprecedented, and the other saying that it’s all happened before. My sceptical bent prefers the second, but my agnostic spirit wants to see better data. Tony Brown, an English student of climate, has done some amazing work using historical sources to try to pinpoint what was happening in climate (in Europe mostly) over the last thousand years. You can read his papers here, and he writes very well, too.

Jennifer Marohasy, whom I mentioned in my last post, has a most interesting essay on her website on historical accounts of extreme heat in Australia. Surprise, surprise — the really hot times seem to have been at the end of the 19th century and the beginning of the 20th. Not only that, death rates from extreme heat (bush fires, for the most part) have plummeted. More people died in Australia from extreme heat events in 1896 than in any other year, with 450 dead nationally. The second worst year was 2009 with 432 dead, followed by 1939 with 420. Considering these numbers in terms of total population, then we have a decline from about 13 dead per 100,000 in 1896, to 6 per 100,000 in 1939, to just 2 per 100,000 in 2009.

Now to my third example of climate history, this time from Canada, where Dr Tim Ball runs a lively website. He is a former Professor of Geography, and an essay of his appeared in WUWT the other day. It is mostly about how climate is always changing, but what struck me was a map and a story connected with it. Ball writes

In my climate research I found a map drawn in 1772 by fur trader and self-taught biologist Samuel Hearne. He followed the tree line (he called it the “woods edge”) from Churchill on the southwest coast of Hudson Bay to the Coppermine River on the Arctic coast and plotted it on a map. It’s a very distinct boundary, as I know from flying over this region for five years… 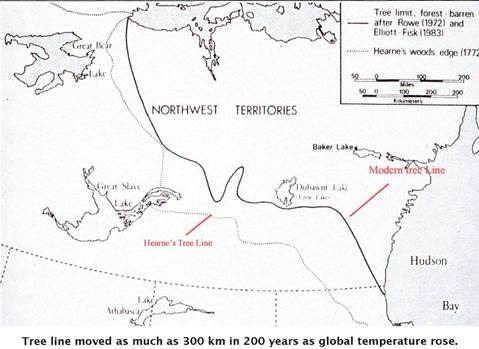 Hearne, whose observations on Arctic Fox are still considered among the best, made a remarkable, astute, comment in his journal.

“I have observed, during my several journeys in those parts that all the way to the North of Seal River the edge of the wood is faced with old withered stumps, and trees which have been flown (sic) down by the wind. They are mostly of the sort which is called here Juniper, but were seldom of any considerable size. Those blasted trees are found in some parts to extend to the distance of twenty miles from the living woods, and detached patches of them are further off; which is proof that the cold has been increasing in those parts for some ages. Indeed, some of the older Northern Indians have assured me that they have heard their fathers and grandfathers say, they remembered the greatest part of those places where the trees are now blasted and dead, in a flourishing state. (Hearne, 1772, p.138).

Hearne’s observations fit the climate record. The tree line advanced during the warmth of the Medieval Warm Period (MWP) then retreated in the cooling to the nadir of the Little Ice Age (LIA). Hearne describes this with his comment that this is “proof that the cold has been increasing in those parts for some ages”. It has warmed since Hearne’s time and the tree line has advanced with a pattern of movement appropriate for the general circulation of the region.

Comparing the “woods edge” (Figure 2) as Hearne drew it in 1772, with the tree line determined 200 years later by Rowe (1972) and Elliot-Fisk (1983), the amount of movement is significant. In the west/east portion from Great Slave Lake to Churchill on Hudson Bay, movement was up to 300 km. This means it moved more than one kilometer per year. Even if it is only half that, it is a remarkable rate of adjustment in one of the harshest growing environments anywhere.

What a story! Earlier than Hearne there had been extensive forest to the north of his line, during a warmer period. After him, things got progressively warmer again until today the new tree line is a great distance to the north from where it was in the early 18th century. It is these reconstructions that appeal to me as a quondam historian, and they tell me that we can all too easily assume that what is happening now has no counterpart in human history.

But that is to assume that only what we can measure precisely is of any significance. Human society, in a form we would recognise, is 10,000 years old, and there has been considerable climate change in that time. We know it from records, like those Tony Brown has collected, and by inference from abandoned reservoirs in the Sahara Desert.

And we need more of this history and pre-history. It is a corrective to the frequent cry that ‘nothing like this has been seen in human history’.