The climate change refugees are coming!

Actually, they’re not. But the family I wrote about last year, who lost their appeal for refugee status in New Zealand on the ground that Kiribati was going beneath the waves because of ‘climate change’, seem to have gained what they wanted. On a Washington Post website a journalist tells us that the family has now been granted residency in New Zealand by that country’s Immigration and Protection Agency. The rest of the story is about Tuvalu, a neighbouring island mini-state, and there seems to be another family in New Zealand from there, in much the same situation.

Is this a sign that the floodgates are open, and people will be coming from everywhere, claiming that they too are going to be beneath the waves? Well, no. The Tribunal neatly avoided giving credit to ‘climate change’, basing its decision on other factors, mostly humanitarian grounds (the family has been in New Zealand for the past seven years, and the members include an elderly mother who needs special care).

Nonetheless, the Washington Post did go on about ‘climate change’.

The small Pacific island nation sits just two meters above sea level. If the current sea level rise continues, experts believe the island might disappear in approximately 30 to 50 years. Tuvalu shares this existential threat with many other island nations and coastal regions, which have struggled for years to raise international awareness about their tragic plight. Predictions for climate change-induced displacement range widely from 150 to 300 million people by 2050, with low-income countries having the far largest burden of disaster-induced migration, according to the Internal Displacement Monitoring Center.

You have to wonder about the common sense of the  ‘experts’ concerned, and the ‘tragic plight’. Current sea-level rise has been estimated by the IPCC at about 3mm per year, which is 3 cm a decade, or 9 cm over thirty years. So, if present trends continue (and there is some suggestion that sea-level rise is declining) then the seas around Tuvalu in 30 years would be 9 cm higher, and in fifty years’ time they would be 15 cm higher. If Tuvalu ‘sits just two meters above sea level’ then on my calculations it will, all other things being equal, ‘disappear’ about 2680, unless there is an astonishing rise in sea levels.

But of course other things are not equal, and coral atolls survive by growing, partly through coral reefs climbing upwards and partly through the accretion of sand and coral fragments during storms, which raises the land surface. It’s worth noting that Tuvalu’s population has more than doubled since 1980, and now stands at 10,800. The land has not doubled, so that food, water and accommodation are tight. The national income comes mostly from remittances from Tuvalu people who work in New Zealand and Australia, and from sailors — Tuvalu men are sought after as sailors and mariners. The economy is static.

All of that provides some sense of why Tuvalu people might want to leave, despite the coral island image. (As a stamp collecting boy in the 1940s I was much taken by the Gilbert and Ellice Island stamps of the day. Tuvalu encompasses the former Ellice islands, while the Gilberts are now called Kiribati.)

To make this rather slight story more attractive, the Washington Post provided a map, and here it is. 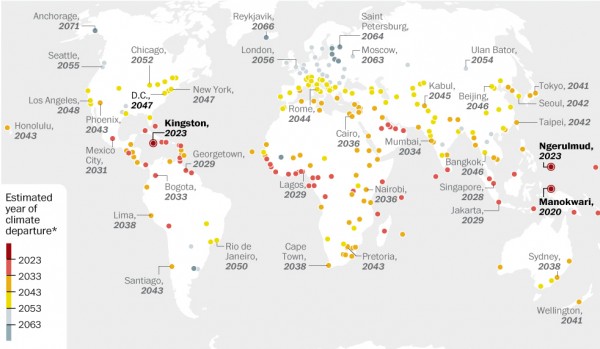 It is offered without explanation, and the casual reader might think it showed where all the climate change refugees will be coming from. That’s what I first thought. Well, no. It is something else again. The fine print says: Using temperature data from 1860 to 2005 as a baseline, climate departure describes the point in time that the average temperature of the coolest year after 2005 becomes warmer than the historic average temperature of the hottest year, for a specific location.

‘Climate departure’ — have you got that? There was a flurry about it on the ABC and elsewhere in October last year, because the map says that Sydney will be so much warmer in  thirty or so years’ time that 2038, apparently a cool year, will be somehow hotter than the average for hot years between 1860 to 2005. How do we know that 2038 will be a cool year, relatively? Blowed if I know. It’s the models at work, of course, and it must be true because it was published in Nature. Perhaps the journalist thought that ‘climate departure’ meant climate change refugees. Nothing would surprise me.

Back to the map. What has it got to do with Tuvalu or Kiribati and climate change refugees? Well, nothing, unless you assume perhaps that ‘climate departure’ (yet another new, vague but ominous term in the orthodox vocabulary) signifies island nations going under water. Alas, neither Kiribati nor Tuvalu is on the map, but one guesses that they will be in the 2020 zone for ‘climate departure’.

Another sceptic has described this whole piece as ‘ecopropaganda’, and I agree. The article starts with an idyllic picture of washing hanging between palm trees with a lagoon behind, relates that a family seeking residence in New Zealand on the grounds of climate change, have been granted it, but not because of climate change, relates warnings from people who say that there might be between 150 and 300 million climate refugees by 205, and throws in a map of the world whose meaning is opaque, to say the least.

This isn’t science, and it isn’t good journalism. But it is a good example of juvenile special pleading.