Standing up against Nannies

I’ve written a few times (here, for example) about ‘the nanny State’, and the way in which well-meaning people want to protect ourselves from ourselves by making illegal things that we like to do. Of course, virtually all domestic law is about protecting us from us, but every now and then I want to cry ‘Enough!’ And I do so in this essay, which is about the efforts of a Green MLA in Canberra to protect us, or more specifically, her grand-daughter, from the wicked writing on Wicked camper vans.

If you haven’t come across a Wicked camper van, then here is a photographic example: 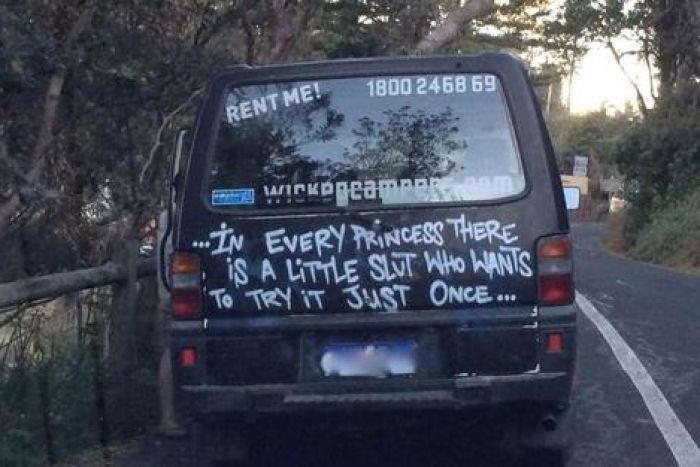 If you travel our fair land by road you are likely to see such vans almost anywhere. I’ve seen one in Birdsville. Would I rent one? No. Would I write on my own car, let alone write stuff like that? No. Do I need to be protected against such writing? No. Am I offended, outraged or appalled? No. You just shrug, and ignore it. Life is too short.

Before I go any further, I should say that the Green MLA who felt otherwise, Caroline le Couteur, is someone I like. Elected several years ago, when the Greens had three seats in the Assembly, she turned out to be a useful and generally sensible MLA. She didn’t make the cut at the next election, but came back last year, as one of two elected Greens MLAs. But we all have our weaknesses, and this is hers. Here is the beginning of what she wrote in the Greens Magazine.

I often visit my daughter and granddaughter in Byron Bay, where Wicked Camper Vans are a regular sight. I have always been horrified and repulsed by them, and concerned that my granddaughter will normalise their violent, misogynist, racist and homophobic messages. In particular, I worry about the negative messages she and her friends may internalise about being female and the standards of behaviour from men they may come to accept.

I can’t say that I am an authority on Wicked camper vans, but I haven’t seen any homophobic ones, or violent ones, or racist ones, or misogynist ones. Maybe they exist, and if I saw one I might ponder. What I have seen are slogans or text that suggest that those who drive the vans and their companions enjoy an active sex life — or at the very least, they have no objection to driving around in a van that carries such a suggestion. I remember surfie vans of the distant past that had slogans on them like ‘Don’t laugh. Your daughter may be inside’. I don’t remember any public fuss about them, though no doubt there were people who were appalled, outraged and offended.

My second point here is that one’s grand-daughter, and I have seven of them, is going to be exposed to all sorts of cues and signals that will be mysterious when she is young and sometimes require explaining. That is a job for parents, and even for grandparents. The Wicked van example is not, in my judgment, a matter for law. If your grand-daughter reads the text on the van in the photo above, and asks what it means, you need to come up with an explanation that works, given her age. You don’t need to take a deep breath and start on the birds and the bees. You could even say,’It’s supposed to be a joke, but I don’t think it’s funny.’ Children find adult jokes hard to comprehend, and you’re unlikely to be pressed further. In any case, you’ll have a lot of such explaining to do. Practice makes perfect.

Now Caroline le Couteur took comfort from the Queensland Government’s recent venture into law-making on this matter. Last month it passed a law that would allow a government department to instruct the van owner to remove writing or images on the vans that had been deemed to fall outside the Advertising Standards Bureau limits. If they didn’t do so within fourteen days, the vehicle could be deregistered. Who pressed them to do so? Among others, the Royal Automobile Club of Queensland, no doubt responding to letters from offended, outraged and appalled members. Since Wicked camper vans are a Queensland company, there was some worry that the company could simply move shop, and go to New South Wales.

And on that point, here is Caroline le Couteur again: I am pleased and relieved that my colleague Shane Rattenbury, as ACT Minister for Justice, Consumer Affairs and Road Safety, last week took a stand against Wicked Campers and the attitudes they promote — outdated attitudes which have no place in our community, harm our women and distort the perspectives of our men. From now on, vehicles de-registered in other states for bearing offensive slogans such as those displayed on Wicked Campers cannot be registered in the ACT. There are currently no Wicked vehicles registered in Canberra, and these laws will help keep them out.

In this way, Canberra is continuing to show leadership with a commitment to challenge attitudes that underpin domestic, family, and sexual violence against women. It is well known that the attitudes casually displayed by Wicked Campers play a large part when it comes to this kind of violence.

I thought it was Queensland that was showing the leadership. Actually, there was a fuss about Wicked vans three years ago, and Commissioner Tim Wilson of the Human Rights Commission* then said, among other things, that Government shouldn’t be going around telling people what they can and cannot say, unless it leads to direct and explicit harm. Just removing things that are offensive, while it may seem attractive, is a very dangerous precedent at least because people always have very different views about what is offensive and therefore should be limited. He got a lot of stick for saying that. And while Ms le Couteur thinks it  ‘is well known that the attitudes casually displayed by Wicked Campers play a large part when it comes to this kind of violence’, I’d be astonished if she could show any evidence to that effect.

It is easy to stand up against censorship when the majority is with you. It is much harder when what is being attacked is something you don’t like all that much yourself. But that is the test. I think that Wicked camper vans are displaying coarse humour. I wouldn’t engage in it myself, at least on my website, or in public. But it would be idle, let alone untruthful, to say that I haven’t engaged in coarse humour in the past. If you don’t like this sort of stuff, ignore it. You don’t have to watch it on television, or buy magazines that use it. If you feel strongly about Wicked vans then write to the company, and urge others not to hire the vans. But bringing out the big Government stick to ‘stamp it out’ on the excuse that your grand-daughter might ask questions hard to answer or might develop bad messages about men, seems quite over the top to me. That is not what governments are for.

If you are worried about ‘negative messages’ that might be ‘internalised’ then do something about it as a parent or grandparent. That’s part of our duties as parents and family. You want to stamp it out? Be very careful. One day people you don’t like might want to stamp out what you are saying or doing. That is the trouble about democracies. You have to allow other to say things you don’t like, so that you have the licence to say things they mightn’t like.

*He’s now the Liberal MP for Goldstein in the House of Representatives, and openly gay.

End note: It is pretty clear what this essay is about. If you want to say something about global warming or Trump, or Turnbull, or indigenous people, or the Australian economy, then this is not the thread to use. Go to the March Off-Topic thread instead. I will reject comments that are irrelevant to this topic, and make this part of the general rules about posting.