Should we be worried about ‘peak oil’?

Every now and then, in reading about global warming and other environmental issues, I come across a reference to ‘peak oil’, usually as yet another example of how humans blindly pursue their own short-term interests, scarcely heeding the crisis that is waiting for them ahead. And of course we humans do have a tendency to do just that, some of the time, at least.

Anyway, I marked down ‘peak oil’ as a subject to read about, and after some time at the computer, protected  by air-conditioning that is doubtless increasing the heat outside, offer you the results of my reading. First, ‘peak oil’ is as contentious as AGW itself. The phrase itself prompts 55,600,000 hits on Google, and there are a dozen or so variants of the phrase as well. You may not be surprised to learn that there are ‘peak oil deniers’ as well.

What is it, exactly? ‘Peak oil’ is defined as the moment of maximum production from a well or basin, when approximately half the recoverable oil is left, so there can be only a declining productivity. It’s not the same as ‘depletion’, which occurs during a period of falling reserves and supply. The term ‘peak oil’ was invented by Marion King Hubbert, a Shell geoscientist who also worked as an academic at Stanford and Berkeley and as a research scientist for the US Geological Survey. He was a serious and distinguished contributor to the geosciences.

Hubbert argued that the supply of oil was finite (no one much would now disagree), and that US production would peak in 1970, which seemed at the time to have been the case. He also predicted that global oil production would peak in 1995 ‘if present trends continue’. This prediction has been much less easy to verify, if only because the expansion of the oil industry from the 1980s onwards, both geographically and in scale terms, has made it much more difficult to say how much oil there actually is.

Both oil companies and oil-producing countries have become coy about how much of their own information they release publicly, and international agencies that monitor energy and oil have to rely on what countries and companies say. BP’s 2013 Statistical Review of World Energy provides the data for the following diagram, constructed by Willis Eschenbach, and the trends are most interesting. 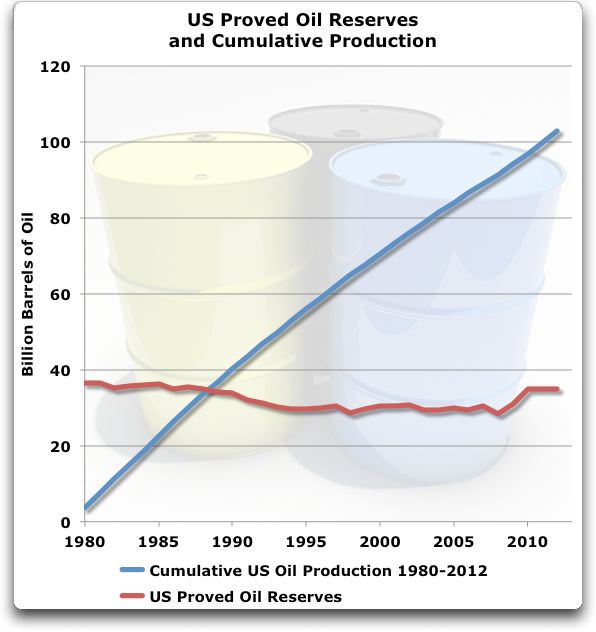 Very simply, proved American oil reserves, according to this chart, have continued at much the same level for some 35 years, while production has gone onwards and upwards. At about 1988 the reserves would have seemed to have equalled total production to that point, which should have meant declining production. But no. New fields came into production that had not been known about in the past.

How long can this go on? We don’t know. In the AGW domain, the scare has moved from ‘right now’, which was the case ten years ago, to the second half of the century. In the case of peak oil, some estimates now say we may reach peak oil globally in 2035. Others say we have already passed it, or it’s next year. You take your pick. One assessment I read suggested that peak oil was an almost silly concept, because both supply and demand for oil are greatly affected by the world price (and oil is a globally traded commodity with global prices for different grades of oil). What will happen, from this perspective, is that oil will become slowly more expensive, to the point where we change what we are doing in many diverse ways: engines made more and more efficient, we shift to different forms of transportation, we bring in alternative forms of energy, and so on. You can see that these changes have occurred to some degree already.

I came to the conclusion that worrying about peak oil is probably unnecessary. It may be that most of the easily recoverable oil has already been recovered, but when a well is ‘dry’ there is still about 40 per cent left: at the moment no one knows how to get it out cheaply enough for the effort to be worthwhile. The ‘unconventional’ oil held in oil sands, shale and other forms is very much larger in volume again, and while, yes, it is also more expensive to get the oil out from shale and sands, that is a technological matter, and technologies do tend to improve, especially when there is a big money prize awaiting. Oil was once very cheap, and its very cheapness was a basic cause of industrial expansion everywhere. Now it is much more expensive, but then GDP has risen a great deal everywhere, so we can still afford it. It’s unlikely to be cheap again.

And here’s a final thought. Australia still had 3.9 thousand million barrels of oil left in 2011, according to BP, and in 1992 we only had 3.2 thousand million barrels left. So we seem to have followed the global trend, as has ‘oil-rich Brunei’, to our north. Actually, Brunei has much less oil than Australia. But there are only a little more than 400,000 people in Brunei, compared to the 23 million in Australia, so its oil-richness is simply a function of its population. You can find out all sorts of interesting things when you can get your hands on some data!