Now for something completely different …

It’s been quite a while since there was anything remotely humorous on this website, but I came across a funny piece in The Onion, an American satirical news website, and thought it was worth passing on. I’ve written about humour and ‘climate change’ before, and there’s not a lot of it. But The Onion has had a go.

The piece begins with a worryingly red map, whose caption went as follows: Scientists say it may be too late to effectively combat climate change deniers, and that humanity may simply have to learn to live with their negative effects. 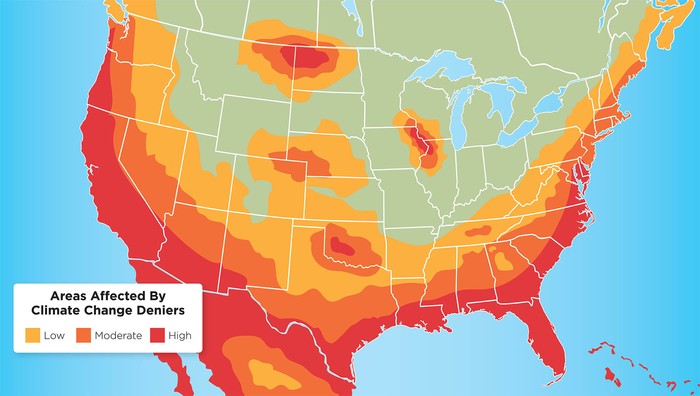 WASHINGTON—In a worrying development that could have dire implications for the health of the planet, a report published Wednesday by the Environmental Protection Agency suggests that the number of climate change skeptics could reach catastrophic levels by the year 2020.

According to the agency’s findings, the rising quantity and concentration of individuals who willfully deny or downplay the ruinous impact of the ongoing climate crisis will no longer be manageable by the end of the decade, leading to disastrous consequences for global ecosystems that may well prove irreversible…

Since the latter half of the 20th century, the EPA noted that more and more regions, biomes, and even human commercial and industrial activities have suffered the harmful effects of individuals who refuse to accept that the ongoing rise in global surface temperatures is due to greenhouse gas emissions. Specifically, the report revealed an alarming upsurge in the number of authors of discredited scientific studies questioning the reality of climate change, adversarial cable news show guests who scoff at the notion that humans can affect Earth’s weather patterns, and politicians whose opinions are controlled by fossil fuel company lobbying groups, all of whose increased presence in the world jeopardizes the planet’s vulnerable biosphere.

Additionally, the report noted a shocking jump in the number of uninformed citizens among the public at large, whose widespread dissemination of misleading data, half-truths, and outright lies regarding climate trends has already facilitated the destruction of numerous natural resources and hundreds of species, while putting still others at imminent risk.

“The fact that the very existence of global warming somehow remains a topic of contention demonstrates that the density of these skeptics has spiraled out of control,” [a spokesperson] said, citing data from the report showing that the concentration of the most ardent deniers recently reached a previously unheard-of 1,500 people per million. “While the U.S. remains the planet’s largest producer of climate change skeptics, countries halfway around the world are suffering environmental destruction from the actions of these people who refuse to acknowledge the threat of extreme weather conditions and rising sea levels. The effects of these outspoken deniers are truly global in scope.”

While the EPA report recognized that past efforts to reverse the proliferation of climate change deniers failed to stem the spread of their erroneous beliefs, it suggested that renewed education initiatives and well-informed public debate could at least limit the emergence of the most destructive and stubborn individuals who continue to dispute a conclusion supported by 97 percent of scientists.

However, with the rise of such individuals having only accelerated over time, the report’s authors conceded that it may no longer be possible to eliminate this devastating man-made phenomenon.

“The profusion of these skeptics was something that we as a nation should have made a better effort to get a handle on in the past,” said [the] report co-author, noting that the increase in private sector groups actively seeking to cast doubt on the reality of declining biodiversity and the melting of the polar ice caps was observable as early as the 1990s. “At this point, so much pseudoscience and misinformation have been released into the world that we simply have to accept that those who refuse to ‘believe’ in objective scientific fact aren’t going away. All we can do is attempt to minimize their impact on our planet.”

“It’s a terrible shame. There was a time when I hoped we would be able to reverse this trend and return our understanding of the consequences of our actions to normal levels,” she continued. “But frankly, it appears to be far too late now.”

Well, I thought it was nice piece of satire, but I did wonder a bit how many people from the orthodox side would read it, and simply nod in agreement, missing the satire altogether.

And for them, I offer this insight from a well-known organisation man: