Getting real details about the New Energy Guarantee is really difficult, because so much of the hard work on details has not yet been done. But apparently the media thinks it ticks all the right boxes. The carbon tax has gone, the emissions trading scheme is dead, as is the emissions intensity scheme. According to the economics editor of The Age, Peter Martin, the NEG will do more or less what each of the other schemes would have done. It will make the electricity system cleaner (in accordance with the Abbott government’s commitments under the Paris climate agreement) while giving investors the certainty they need to work out what kind of power stations to build and when.

Well, that’s comforting. It had seemed to me impossible for anyone to design an energy policy that provided cheap electricity, reliable electricity and achieved what Australia had signed up for in Paris. You could in theory have any two of them, even cheap power and Paris commitments, if we covered the landscape with solar farms and wind turbines, and governments absorbed the cost so that consumers didn’t pay any more than they were doing now (forget about the increased taxation or reduced benefits). But you couldn’t have all three.

Now where did the NEG come from, apart from out of the blue? Ah, it is the work of the Energy Security Board (ESB). Who is it/are they? Ah, well, the Board was set up in July by the Council of Australian Governments (COAG) to co-ordinate the implementation of Dr Finkel’s energy policy reform blueprint. And what it has done is unanimously to reject Dr Finkel’s Clean Energy Target (CET), which is an interesting version of ‘implementation’. The Government has accepted this recommendation, which gives it more elbow-room in which to design a policy. Because Labor hasn’t so far completely opposed the new scheme, and because there are some who say it is really a carbon tax in disguise (it must be a good disguise, in my view), there appear to be sighs of relief, as though it’s all fixed. I can’t see what is actually to happen, and indeed, if my suspicion is well-placed, I can’t see how anything much that is useful is to happen. Oh, I should admit that there is no sign that the NEG will allow Australia meet its obligations under the Paris Accord — and I’m happy about that, since I think that whole exercise is fatuous. But there is no obvious sign that we will get either more reliable or cheaper electricity.

But, as I said at the beginning, it is really difficult to work out, or to find out, exactly what is at the heart of the problem. There are many factors. The state governments have got out of the business of generating electricity, and much of it is now private sector business, with the additional possibility that much of it is owned by an offshore corporation. Then the state governments have been steadily increasing the royalties on the extraction of coal by mining companies, which means coal is increasingly expensive, to the point where building a new coal-fired coal-based power station doesn’t seem particularly worthwhile. That doesn’t mean that investors have gone Green suddenly, only that it looks like a risky venture. Hence the call for certainty for investors. Yes, that makes sense. But I can’t see any sign in what I have read about the NEG that it changes the risk factors. I’d be happy to have my oversight pointed out.

You might ask why the Commonwealth Government is involved at all, since there is no Constitutional head of power that gives it standing in the matter of electricity generation. And the grid itself is complicated, institutionally. Is anyone really in charge? I’m not sure. Let us start with  the NEM, the National Electricity Market, the system that allows the cross-state generation and use of electricity. The Australian Energy Market Commission (AEMC) makes the rules and generates policy for the NEM. The Australian Energy Regulator (AER) enforces the AEMC rules and is responsible for the economic regulation of the networks. The Australian Energy Market Operator (AEMO), a creation of COAG, seems to incorporate all of these functions and oversees system security. It also looks after the reticulated gas system that is also cross-state in its reach. Got all that? Then there is National Electricity Law (NEL) and National Electricity Rules (NER). The Commonwealth did not set any of this up, though it approved it. The NEM and its institutions are an initiative of co-operative federalism. To repeat, I’m not sure that any one is in charge. You’d think it must be the Operator (AEMO), but it seems quite modest about its role. But wait! The ESB (remember it, the CET killer?) consists of the heads of the AEMC, the AEMO and the AER, with an independent Chair and an independent Deputy Chair. Very possibly the ESB is now the boss of the system. It would be nice if someone competent said so.

Now where is the certainty to come from? Let us remember that coal is far and away the major source of all electric power in our country, as is shown by this 2015 diagram from Origin. 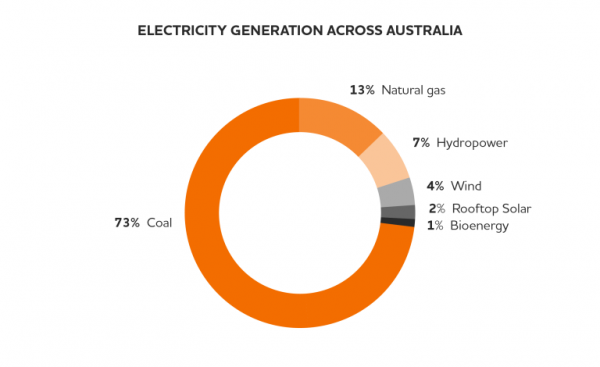 I would have thought, and the diagram suggests it strongly, that the certainty needed is that with respect to building new coal-fired power stations (I’ll leave nuclear energy aside for this essay, as it is a subject in itself). All power stations have a finite life, and in due course need to be extensively renovated or scrapped altogether. For there to be certainty for investors in this area, there would need to be some rule that capped royalties, which is not a Commonwealth matter. There would also need to be some rule that guaranteed that the proposed power station would always be running, or at least running optimally, since it takes a day or so to get such a system up to its optimal level. Stopping and starting coal-fired power stations is wasteful and unproductive.

I see no sign of any of this in what I have read so far. Perhaps that is for later, but I am told also that there are serious anxieties about the current system’s capacity to deal with sustained heavy demand in summer, especially when there are hot windless days for a week or more. We will see. If someone can point out to me where the investors are to get their confidence, then I will be an attentive and courteous reader.

Finally, where is the cheaper electricity we are told about, not to mention the cheaper gas? Ah, we seem unlikely to see any lower bills for some time, and the figure of $2 a week, or $100 a year, has been bruited about. With all modesty, I would have to say that $2 a week reduction is not what I was looking for. Our bills are rising at about twenty per cent a year, with no end in sight. What I am reading about is the proverbial feed for chickens.

Oh well, it all has to be approved by COAG, which meets in November, and the whole exercise so far smacks of the back-of-envelope calculations that people make excitedly in hotel bars. There are those who think that Mr Turnbull has done very well with his NEG. My own feeling is that, to follow W.S.C., the NEG is not the end. It is not even the beginning of the end. But it is, perhaps, the end of the beginning. A whole lot more needs to happen before we have a real, stable, national electricity strategy. And there simply is no sign that renewables are the future, however dear they are to you. Just look at that diagram again.