Making sense of the ACT elections

I thought I would pass on the American presidential election, having no vote and disliking both candidates about equally. Instead I thought I would write about the recent ACT elections, which are now done and dusted.

Unusually, given the complications of the voting system, it was all over by ten o’clock on polling day. The Liberal Leader conceded defeat and the Labor Leader claimed victory. Within a week it was plain Labor had twelve seats, the Greens two and the Liberals eleven. There will be another four years of Labor rule in the ACT, in a quasi Coalition with the Greens, and in 2020 Labor will have been in power for 19 years, when voters will have another opportunity to make their feelings known.

Making sense of election outcomes used to be one of my trades, and I found this election more interesting than most. It occurred in an extraordinary context: the Legislative Assembly had been enlarged from 17 seats to 25. So Canberra voters were now in new electorates with some new names and all new boundaries. As a consequence, a new set of hopefuls offered themselves to the electorate. In the old Assembly there had been two five-member seats and one with  seven members. Now there were five seats with five members, so the quota for election (1/6 + 1, or 16.7 per cent of the total vote) was still the same for most candidates.

There seemed to me to be two main themes. The first was whether Canberra should go down the light-rail option for public transport, and since the Labor Government had already decided that it would do so, and had drawn up the contracts so that it would be expensive for an incoming Liberal Government to terminate them, a subsidiary theme was that the Liberals, thoroughly ‘anti-Tram’, were proposing to waste money. The second theme was that the Labor Government was already fifteen years old, and it was therefore time for a change. The Liberals proposed a new hospital, but that was quickly matched by the incumbents, the difference being the timing. On the whole I thought that the Liberals’ campiagn was better and more professional, and at least where I lived the Liberal candidates were actually visible.

The outcome was seen as a dreadful loss to the Liberals, whose private polling had told them they were on track for victory. So what happened? The change in the size of the Assembly and all that followed from that has to make comparisons with the past awkward to say the least. In addition, we need always to remember that over the years the electorate changes. About one per cent dies every year, and about one and a half per cent arrive each year through coming of age and immigration from elsewhere in Australia. In 2012 243,000 people were enrolled to vote in the elections of that year, compared with 283,000 in 2016. That represents an increase of 16.5 per cent. My rough estimate is that only about 75 per cent of those who had voted in 2012 also voted in 2016. That’s a substantial difference.

In addition, there is not simply a swing from one side to the other. There are all sorts of movements. Here is an example from the late 1960s, a time when the Vietnam war was a principal election issue. The table comes from Stability and Change in Australian Politics. These are the same people, interviewed in both 1967 and 1969, and reporting what they would have done in 1967 and what they did in 1969. OK, it’s nearly fifty years ago, but the principle is the same. 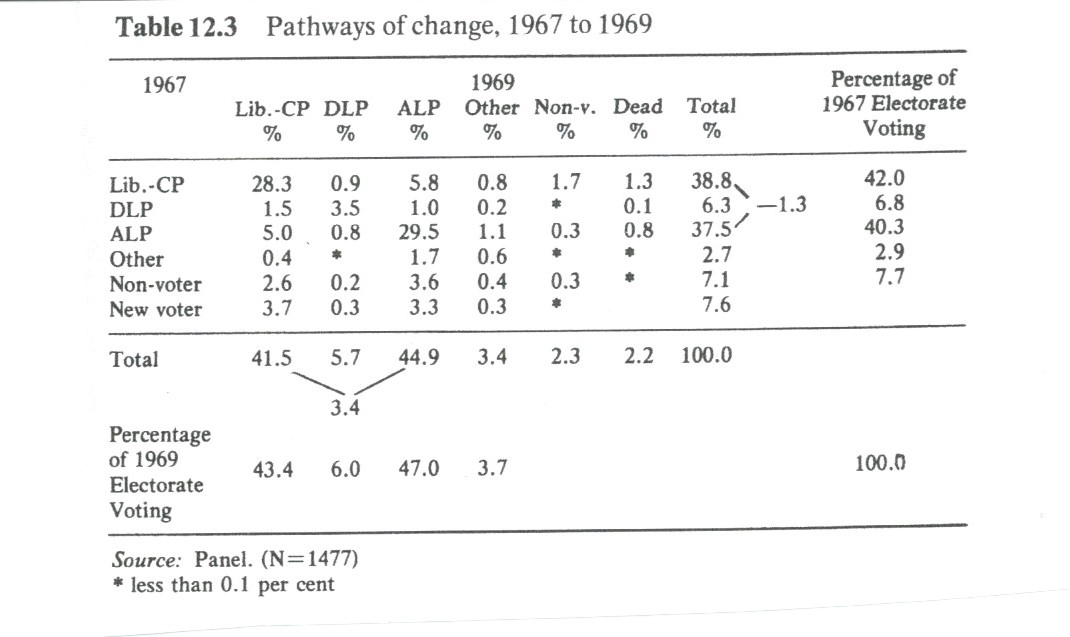 The first column in the table, marked 1967, shows a summary of the options available to voters in 1967 (how they said they would have voted then). A certain amount of estimation, drawn from census and immigration data, has gone on to determine the proportions of new voters and dead voters in the marginal totals*. Then follow seven options for those respondents in 1969, followed by the total in 1969. You can read horizontally: 28.3 per cent of the respondents who said they voted for Liberal or Country Party candidates in 1967 did so in 1969 too, just less than one per cent of them voted DLP, nearly six per cent went over to the Labor Party, 1.7 per cent did not vote, for whatever reason, 1.3 of them had died. The outcome, 38.8 per cent of the vote, is rather less than the actual share we estimated for the Coalition, at 42 per cent.

You can read diagonally: 28.3 per cent were solidly Coalition, 3.5 per cent solidly DLP and 29.5 per cent solidly Labor. Throw in the 0.6 per cent who were solidly ‘Other’, just to bump up the total, and you get 62 per cent who stayed with the same party on both occasions. Straight conversion? In 1969 Labor picked up nearly 5.8 per cent from the Coalition, but lost 5.0 per cent to the Coalition, so there wasn’t much in it. Labor gained more from ‘circulation’ — from the arrival of new voters and the death or old ones.

What the table shows, above all, is that there is great deal of movement from one election to another. Because of our preferential voting system and the culture of compulsory voting, each election outcome is a series of exchanges among  the major party groups and the others. That is as true today as it was then, and perhaps even more true, because much of the survey evidence over the past fifty years is that the major party groups are slowly losing ground to single-issue groups and outfits like the Greens and One Nation — parties which express strong feelings of one kind or another that are to a degree at a tangent from the main parties.

Given all that, what can we say about the 2016 ACT elections, where we do not have data like those in the table above? As stated before, there was a 16.5 per cent increase in the total electorate, and probably only 75 per cent of those who voted had done so at the last election. Quite a few didn’t turn up to vote, since the voters made up only 88 per cent of the electorate. On the other hand, informal voting was tiny, about 2.5 per cent.

Well, the ACT system is one of proportional representation, which is like the system in voting for the Senate. So it is hard to work out, unless you do a vast amount of work, just what voters wanted. The party totals showed a swing away from the three major party groups — minus 2.2 per cent for the Liberals, and minus 0.5 for each of Labor and the Greens. As it happens, that is pretty similar to the swing away from them four years earlier as well. In fact the Greens’ vote in 2016, proportionately, was only two thirds of their vote in 2008. Who did well? All the minor groups and independents.

We can’t easily work out the normal ‘two-party preferred’ equivalent for a five-member PR contest. But if you look at the party leaders, the distribution of their surplus votes tells you something. Labor’s Andrew Barr’s surplus went two-thirds to other Labor candidates, and not quite one fifth to the Greens. In contrast Liberal leader Jeremy Hanson’s surplus was  much more tightly transferred: 93 per ent to other Liberal candidates, one per cent to the Greens and two per cent to Labor. Read into it what you will.

Hanson fell on his sword, accepting the blame for the result. I thought that was quite unnecessary at the time, and this essay follows my feeling that there was far too much uncertainty in the pattern of voting for anyone to claim responsibility for anything. The data suggest that the only thing we can say is that Labor scraped back in, while the Liberals didn’t attract enough voters to pass the combined Labor + Greens tally, though there wasn’t all that much in it.

And, finally, the major parties, including the Greens, are continuing to lose market share, just as the newspapers are. Where it will all end I don’t know. But I feel that in the Federal sphere the same loss of market share is going on, too.

*Constructing a table like this one is actually quite complicated, and there is a long footnote setting out how it was all done. I’m happy to send it to anyone who is interested. Because of the amount of estimation and the fact that while the 1967 sample is an excellent one, those who survived to 1969 are not as good a sample of the 1969 electorate, not too much notice should be taken of individual cell entries.