Herschel, sun-spots and the possibility of cooling

I’ll keep yesterday’s history theme going. One of the great astronomers of all time was Sir William Herschel, who flourished in the late 18th and early 19th century. He discovered Uranus, along with two of its moons — and two of the moons of Saturn as well. He was an extremely gifted maker of lenses and telescopes, a fine mathematician and a serious composer as well.

And he had an interest in sun spots that came from his interest in variable stars, those whose brightness waxes and wanes. We have our own star, and Herschel noted that it possessed spots that came and went. Were they somehow linked to brightness, and could the sun’s spots have an effect on the climate of the earth?  He observed periods between 1795 and 1800 where there had been no sun-spots at all, then they had suddenly appeared in great number again. What was going on?

He argued before the Royal Society in 1801 that many sun-spots should lead to ‘a copious emission of heat’, which should lead to warmer weather on Earth, milder seasons and agricultural productivity. The price of wheat was a serious matter at this time, because bread was the basis of life for the poor, and too high a price led to famine and death. So Herschel, unable to consult any contemporary HadCRUt4 data or any satellite observations, tried to work back from the records of good and bad harvests.

Adam Smith had written An Inquiry into The Nature and Causes of The Wealth of Nations in 1776, and Herschel used Smith’s work to identify five periods when the price of wheat had been very high. He had sun-spot numbers to work with, and it seemed to him that a lack of sun-spot activity went along with poor harvests. Greater sun-spot activity corresponded to excellent weather, good crops and lower prices for wheat and bread.

Alas, Herschel was not congratulated by his colleagues or the Royal Society for his novel hypothesis. In fact, it was rejected and dismissed. Many summary accounts of Herschel’s life and work hardly refer to this episode. Nonetheless, there are scientists who have thought Herschel got it right, and others who thought he was just plain wrong. The debate continues today.

As convincing evidence supporting the ‘control knob’ theory of carbon dioxide has been lacking over the last decade or so, the notion that sun-spot patterns might have something to do with the halt or pause to cooling has been gaining more attention. The IPCC has taken no notice, but then the IPCC has the task of measuring human contributions to ‘climate change’, and humanity does not control the sun.

Some solar physicists have  for the past thirty years been talking up the Sun’s role in the Earth’s climate, without gaining any real traction. In the past decade four of them, all notable and highly respected, have been drawing attention to the declining number of sun-spots over the last  few solar cycles (which have an average length of 11 years), and have argued that we could be in for a period of sustained cooling. They are Mike Lockwood, from the UK, Horst-Joachim Luedecke from Germany, Habibullo Abdussamatov from Russia, and Anastasios Tsonis of the USA. All of them have based their projections on solar cycle and sun-spot analysis, and while they aren’t all saying the same thing, they are saying that the number of sun-spots is more important than has been conceded in the recent past. And that serious cooling is in prospect. 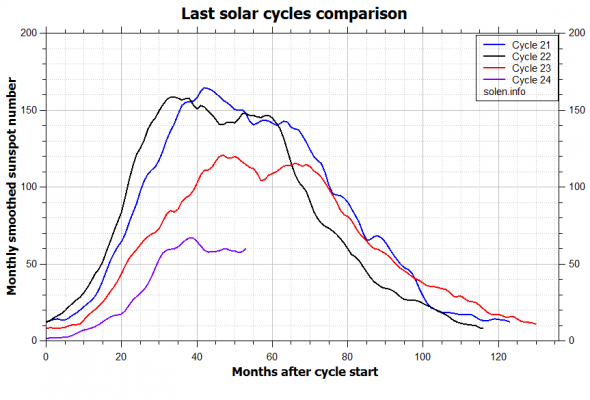 The sun-spot numbers are down, and some solar physicists are suggesting that what we are seeing looks like what happened a few centuries ago, when sun-spot figures had a similar trend and the world experienced some very poor harvests indeed. I am no solar physicist, and much of the argument is too technical for my limited competence. I recognise also that correlation does not imply causation, which I have said before about the association of  carbon dioxide growth and the rise in global temperature — when the two were occurring together.

But I am beginning to suspect that there might be something to the notion that the Sun’s effect on our climate is both great and poor understood, and that Sir William Herschel was on to an important connection when he spoke to the Royal Society in 1801.