Greta and the Hornsby Council 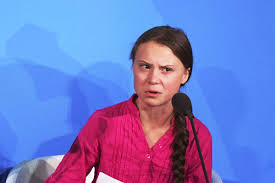 I had not taken much notice of the 16-year-old climate activist from Sweden, Greta Thunberg, thinking that she was simply part of the children’s crusade about climate change. Then I learned that she had given a great speech to the General Assembly of the United Nations, and that the world was buzzing with it. So I thought I had better see what the buzz was about. There are various versions of it, most of them shortened. Just go to You Tube. I don’t think it matters a great deal which versions you watch: you’ll get the same message.

For those who haven’t seen it, or her, my summary is that she is an articulate girl/woman, passionate and angry. What exactly she is angry about never became quite clear to me, but it has to do with climate. She thinks that the generations older than her are responsible for it, that it is bad in itself (aspects of a warmer climate change could be most beneficial to some parts of the world, Sweden not least of such nations), and that somehow the older generations are relying on those younger to solve the problems. ‘You come to us for help,’ she declaims at one point. ‘How dare you!’ (Great applause from somewhere.) Indeed, she uses the rhetorical ‘’How dare you!’ several times, and each time she waits for the applause. For her age she is a skilled public speaker, and to speak in the General Assembly is no easy feat (I have sat in it as an audience member, fortunately without having to utter a word.) En passant, why any of us would be asking 16-year-olds to solve world problems escapes me entirely. I’m unaware that there has been any such cry.

But my general impression is that what I heard was a rant, indeed the kind of thing you might expect from a seven-year-old having a tanty, leaving the table, slamming the door and sobbing on her bed. I don’t think she knows much about science at all, and I doubt that she wrote the speech. There are so many things wrong with its content that it is pointless to start a line-by-line refutation, but one example would be her claim that for thirty years the science [which science?] has been crystal clear. That’s so easy to demolish. The whole thing is a travesty of public debate. I think she is deluded, enjoying the fame, and wondering what the next task will be. She says at the beginning of her speech that she oughtn’t to be here (the UN), but in school. I agree entirely.

There is a whole lot of stuff in the media about how Greta is being pushed by her mother, a former actress, and she has certainly been picked up by those with lots of coin. But I leave all that for those with that kind of interest. Mine is the accuracy of the content of her speech (which in my view is appallingly bad), and its possible effect on others. My guess is that she will have disappeared from public sight within twelve months. I hope so, anyway. Meanwhile, on the other side of the world, here is a small story about an incident in Sydney that bears on Greta’s heart-felt appeal to somebody to do something (she doesn’t know what) about climate change.

What follows is an emailed letter that seems to have been widely circulated. So far as I can find out, it is factually accurate. I have shortened and edited it slightly. Its origin is the Australian Taxpayers’ Association. You can read an angry report from those who wanted the Council to agree that there was a climate emergency here.

‘Last Wednesday, I attended a council meeting at Hornsby shire. Up for debate was a motion that some of you might be familiar with — that the council should declare a “climate emergency” in response to the impending threats posed by climate change.

A dedicated and well-resourced lobby of green activists has been pushing for motions like these at local governments in the western world: across Australia, New Zealand, the United Kingdom, the United States and continental Europe.

They’ve had some success. The City of Sydney council declared a “climate emergency” earlier this year. Northern Beaches council also declared one recently. Many others have followed suit.

The room was stacked to the brim with activists in “Stop Adani” t-shirts and there wasn’t even enough space for everyone to sit.

One activist began shedding crocodile tears as she told us about how she had developed a drinking habit because of anxiety over the ‘climate emergency’. I certainly needed a drink after listening to her…

It seemed inevitable that Hornsby Shire council would become the latest to succumb to the global push. But it didn’t. The council declined to declare a climate emergency.

So what happened? A passionate band of vocal residents spoke up against the motion. They included scientists, engineers, men and women with families who believe in their community and believe in the future of this wonderful country. I was proud to stand with them.

We spoke out because the science is not settled on the issue of “emergency”. Only 1 of the 32 models collated by the UN Intergovernmental Panel on Climate Change has accurately predicted the trajectory of global temperatures thus far. And it does not predict an alarmist scenario calling for rapid action or de-industrialisation within the decades to follow.

We spoke out because Hornsby Shire Council accounts for a small fraction of the already minuscule 13/1000th fraction of global greenhouse gas emissions that Australia accounts for. Anything that the council does, ostensibly at the expense of Hornsby’s ratepayers or Australian taxpayers, will make no meaningful difference to global emissions or temperatures.

We spoke out because a vague and meaningless term like “emergency” with no details is tokenistic virtue-signaling at best, and an excuse for draconian, expensive and reactionary spending programs at worst.

We spoke out because most of us wouldn’t necessarily oppose financially prudent initiatives that green the area or make it more walkable and livable. Or, even better yet, environmentally friendly ways to more cost-effectively deliver council’s core services of “roads, rates and rubbish”.

Yet these “climate emergency” motions come with no such detail.

After all, state and federal governments already throw billions a year into emissions reduction funds or subsidies for renewable energy and we don’t need to see more of that at the local government level.

But if there is one takeaway from all this, it is that the voice of the silent majority will prevail if we are not afraid to counter the vocal minority who are not afraid to speak out or to quickly mobilise into action.’

Maybe Greta will pull a counter-movement together. I hope so.