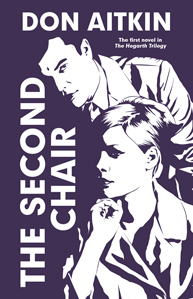 It is 1963, and everything seems fine for the beginning of the academic year in Sydney’s new university. But the sudden death of Professor Bill Gilbey sets in train a political intrigue with disturbing implications

For the suddenly elevated Head of Sociology, Richard Hogarth, Gilbey’s now vacant chair has to be filled, but individuals in and outside the campus have other ideas. The medicos see an opportunity to move the chair to Medicine, and Hogarth finds that what seemed straightforward is actually quite complicated. And in time the security service becomes involved as suspicions of communist infiltration arise.

And behind the public posturings the private problems of the participants emerge to influence and confuse the sequence of events. This novel of campus intrigue was originally published in 1977 by Angus and Robertson, and was compared favourably to the work of C. P Snow in England. You can read some more about the background to the novel here.

I had some copies left  of the paperback version (247 pp) published in 1981, but they soon disappeared, and I worked on a second edition, necessary because some small incidents in Turning Point needed support from the first novel. There is a small prize for anyone interested and sharp-eyed enough who can find what they are. The second edition is now available, and, like its successor, is priced at $29.95 (p&p included). It is also in a larger page size and a larger font, which will please those readers who complained about the meagreness of the size and font of Turning Point. In time, I will reprint that novel so that it is the same form as The Second Chair. Nobody’s Hero, the final novel in the trilogy, will be available in march 2016, and will be in that larger size.