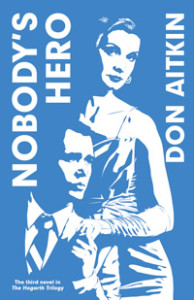 Nobody’s Hero is the third novel in the Hogarth Trilogy, and covers the years 1964 to 1966. It begins with Hogarth’s returning from the US, after a successful visit in both personal and professional terms. Within a day he is in what seemed to be just an ordinary promotions committee meeting, which considered applications for promotion in Science. One of the candidates, Pat O’Grady, proves to be a problem, and does not gain promotion. Hogarth next encounters him at a protest meeting about Australia’s entry into the Vietnam War, and O’Grady, in one way and another, is to become a central character in the story. Elsewhere, Hogarth’s marriage, always a disappointment to him, receives a reinforcement in an unexpected way, while he is asked to help the Government by restructuring the munitions factory that had been the issue facing a Select Committee in the previous year, for which Hogarth had been a consultant (Turning Point).

His work there is complicated by the war in Vietnam, to which his wife Helen is passionately opposed. Her involvement leads her to become a participant in a protest at which many are arrested. Her work as a solicitor brings her to the attention of a leading industrial law firm, and she begins to work for them, soon joining the ALP and becoming well known in Labor circles. As the 1966 elections draw closer she is suddenly asked to run as a Labor candidate in an unwinnable North Shore electorate.

Hogarth’s academic life, already complicated by his increasing work in policy matters both inside and outside the university, is now further stressed by the needs of his wife and his children who need his care and guidance as their mother learns about the hard slog of campaigning. O’Grady appears in his life again, this time in a matter that involves the war service of the Vice-Chancellor, now knighted, who has always been reticent about his role in this area. The demands of his marriage and his loyalty to his boss reach a climax at the end of this compulsive tale.