Back to energy, again

Driving in the bush with my son on Saturday I saw some gigantic wind turbines on top of a small range, and he told me there was a line of them stretching up to Crookwell, quite a way away. That got us talking about the fantasy of wind power, while later the talk took me to another excellent Judy Curry piece, the origin of which I have begun to read. Since it is nearly 350 pp long I will give readers bits of the Extensive Summary instead.

Written by two members of the European Parliament, Katinka Brouwer and Dr Lucas Bergkamp, its title is Road to EU Climate Neutrality by 2050. Spatial Requirements of Wind/Solar and Nuclear Energy and Their Respective Costs. Does it apply to those Downunder? Well, yes, it does. The EU has endorsed the objective of achieving by 2050 ‘climate neutrality’, that is, net zero greenhouse carbon emissions. The two authors, assisted by a team of qualified peer reviewers, have sought to find just what that would mean in practice, and why the Commission would not prefer going nuclear rather than embarking on a great expansion of solar and wind sources. Since much of the rest of the world has said ‘we too’ and our own PM seems to be dickering with same goal, what Brouwer and Bergkamp have set out in their book-length report ought to be of great interest.

So here are the take-home messages. The first is that the EU’s 2050 goal ‘involves a high risk of ineffectiveness’. Nuclear power, they argue, can hedge against this risk. Second, nuclear power offers substantial advantages over any combination of wind and solar power. Third, the cost advantages of nuclear power increase once system costs are added to the equation. Fourth, they increase further the higher the penetration of wind and solar. Fifth, even if ‘climate neutrality’ were achieved, the resulting decrease in average global temperature would be so small it would not even be noticed. Semi-finally, there is no proven pathway that would lead to a zero outcome. Finally, Europe cannot prevent other countries from doing what they see as in their national interest, and unless and until they agree with the 2050 goal and take it seriously, the EU goal is a pipe-dream.

There are some memorable lines in the report, and here are two:

EU climate neutrality is an ideal that may never become reality in our interdependent world. The reality is that the EU cannot limit emissions in the whole world, and that the proposed solution, renewable energy, is an ideal with serious side effects.

Plainly the authors plump for nuclear, and I have respect for their arguments and the data they provide. One aspect of land-use I hadn’t thought of, mostly because I regard the nuclear alternative for Australia as presently both difficult and unlikely, is that nuclear power plants can be placed where we already have coal-fired generators. The demolition of the EU alternative energy scenario is thorough, especially because it is central to that scenario that fossil fuels be retired from the system as alternative energy sources are introduced. What is required is an astonishingly large transition.

There is a lot of head-scratching from the authors about the transition. They warn that

Depending on variables such as electricity demand and capacity factors, in realistic scenarios, there is not enough land to meet all power demand if the Czech Republic and The Netherlands were to rely solely or predominantly on wind and solar power. In the Czech case, it is even out of the question that the available land will be sufficient to cover all electricity demand.

As the penetration of wind and solar increases, competing land uses, landscape protection, and nature protection will increasingly come under pressure, resulting in land price increases and deterioration of the living environment. In the Czech Republic, if only 30 % of the power is generated by renewables, all available land is occupied with wind and solar.

It just ain’t gonna work, at least for those two nations. And if not for them, for whom will it work? The authors do not say, and to find the answer you would have to do the same detailed analysis. Their report has already been taken seriously by the Czech Government, but not, so far at least, by the Netherlands Government, let alone by the EU itself. The current freeze in Germany has produced outcomes like the one shown in the following image. What then — back to candles? 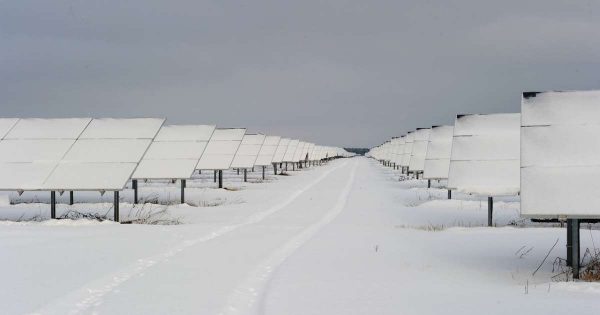 The authors take for granted that fossil fuels are not to be used at all as part of ‘carbon neutrality’. I certainly wouldn’t do that here, and Poland, which has large supplies of coal, is no less adamant that coal will remain part of its energy mix. Indeed, the authors show that fossil fuels are still a large element in the EU’s own energy mix right now. And that leads them to point out, not only that the amount of land needed to provide a wind-and-solar only electricity mix is simply not there, but that even to provide a nuclear hedge  would require so many new nuclear generators every day until 2035.

So what do they recommend? Their basic thrust is to put nuclear on the same footing as wind and solar. They point out that wind and solar get astonishingly large assistance from government policies of all kinds that is not available to any other supplier of ‘non-carbon’ energy, and that has the effect of making alternative energies apparently cheaper. It is an apparent cheapness only, because where real money is involved, the whole electorate pays, by transferring funds to the government, which then provides the funds to people doing research, for example, but only research that assists the providers of alternative energy. The authors have a simple statement about the issue.

Because current EU policies favour renewable energy over nuclear energy, assessment of the relative cost of both technologies can easily be led astray and reflect the policy status quo, rather than anything inherent to these technologies.

For a long time people here in Australia have been arguing the toss about the relative cheapness of alternative forms of energy.  As in Europe, those discussions start with the ‘policy status quo’, so we get claims that solar energy is now cheaper than coal. Well, it may be, but let us look at the whole cost of both forms of electricity provision.  My guess is that solar won’t finish up ahead, but first we need to do the sort of careful data collection and analysis that this important paper sets out.

ENDNOTE: Dr Curry offers us another interesting paper at https://judithcurry.com/2021/02/12/a-climate-of-dialogue/. Here two European scholars who have worked and published together take issue over how important climate change actually is. You’ll learn a new word: ‘pacated’, which seems to mean ‘peaceful’ or ‘respectful’, which the debate is. I thought it was the authors’ invention, but no. It is an obsolete alternative for ‘placated’ or peaceful.